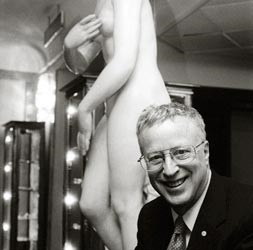 George Arthur Akerlof, Michael Spence, and Joseph Stiglitz shared the 2001 economics prize “for their analyses of markets with asymmetric information”. Many markets feature asymmetric information – people on one side having better information than those on the other. The 2001 laureates’ work, largely during the 1970s, formed the core of modern information economics. Akerlof demonstrated how, for example, a market where sellers have more information than buyers about product quality – he cited the used car market – may lead to an adverse selection of low quality products. He showed how asymmetric information of borrowers and lenders may explain spiralling borrowing rates on local Third World markets, and dealt with the difficulties with labour-market discrimination of minorities.

Akerlof was born in New Haven, Connecticut, in 1940, the younger son of a Swedish academic chemist. The family moved several times with Mr Akerlof’s changing work circumstances, living in Pittsburgh, Washington and Princeton. Both brothers progressed to Yale, where George studied liberal arts before turning to economics and mathematics. He gained his BA in 1962 and went on to MIT, where he earned his PhD in economics in 1966 and joined UC Berkeley as an assistant professor. In his first year at Berkeley he wrote ‘The Market for Lemons: Quality Uncertainty and the Market Mechanism’, published in Quarterly Journal of Economics in 1970. This was the work cited in Akerlof’s economics prize, but he credits his friend Tom Rothenberg with much of the work and inspiration. In 1967–68 Akerlof spent a year in India, working on a dam project, but he also wrote articles on Indian fiscal policy and the role of the caste system in unemployment.

Although not a Republican, from 1973–74 he served as Senior Economist at the Council of Economic Advisers for the Nixon government, during which he met and married his first wife Kay Leong. They split when his failure to get promoted at Berkeley pushed him into a monomaniacal funk. Akerlof then offered to resign (but the offer was not accepted) and joined the Federal Reserve Board in Washington, DC in 1977 before accepting a professorship at England’s London School of Economics the following year.

In Washington he met and married Janet Yellen and they moved to the LSE together. They returned to the US, and Berkeley, in 1980, where Akerlof began his work on social problems in the employment market. During the 1990s Akerlof spent some time as a househusband, looking after their son Robert (born in 1981) as Janet served on the Board of Governors of the Federal Reserve System and President Clinton’s Council of Economic Advisors. Akerlof also continued to work on both macroeconomics and poverty and remains on the staff at Berkeley.