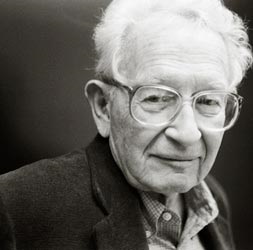 Philip Warren Anderson is an American theoretical physicist who received the 1977 Nobel Prize in Physics, shared with John van Vleck and Sir Nevill Mott, for his research on the electronic structure of magnetic and disordered systems. He was born in Indianapolis, Indiana in 1923 and grew up in Urbana, Illinois, where his father was a university professor. Philip was encouraged in the sciences from an early age by his family of “secure but impecunious Midwestern academics”.

He graduated from University Laboratory High School in Urbana in 1940 and went to Harvard intending to study mathematics but urged by wartime necessity to study electronics. Graduating in 1943 he spent two years building antennae for the navy before returning to his studies under van Vleck, during which time he married Joyce Gothwaite, and had a daughter. Gaining his doctorate in 1949 he went to work for Bell Laboratories in New Jersey, staying with the company until 1984 and working on problems in condensed matter physics. During this time he discovered the important concept of localisation, (the idea that an electron can become localised by the presence of disorder in a system). He also worked on magnetism and formulated the pseudospin approach to the BCS theory of superconductivity.

Anderson reacted against the McCarthyism of 1950s America to the extent that he protested against the Vietnam war and US ‘Star Wars’ program and refuses to work on classified projects. In 1953 he attended the Kyoto International Theoretical Physics Conference, where he met many future colleagues, including Nevill Mott. He also gained a love of Japanese culture, and became a master of the board game Go. He met Mott again during a year in Cam- bridge in the UK at the Cavendish Laboratory and Churchill College (1961–62), and in 1967 Mott arranged for Ander- son to become a regular Visiting Professor at the Cavendish laboratory, teaching the Theory of Condensed Matter until 1975. From 1975–96 he taught at Princeton University, spending 1993–94 at Balliol College, Oxford.

He has served in high office at the Aspen Center for Physics, the American Physical Society and the Santa Fe Institute. Besides the Nobel Prize, he received the National Medal of Science, membership of the Royal Society, the Accademia Lincei, and the Japan Academy, and honorary fellowship of Jesus College, Cambridge.