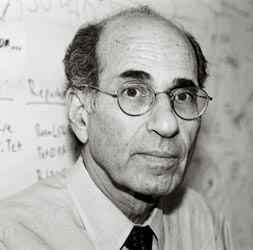 The sense of smell varies from animal to animal. Fish, for example, have only around 100 odorant receptors, humans have nearer 1,000, while dogs have, on average, 40 times the ‘sniffing area’ that humans do. Richard Axel and Linda Buck received the 2004 award in physiology or medicine for their work on olfactory receptors in rats – which have slightly more than humans. By analysing DNA, they estimated that there are approximately one thousand different genes for olfactory receptors – roughly three per cent of human genes. All the odorant receptors differ in certain details, making them react to different odorous molecules – we can ‘remember’ approximately 10,000 smells. When a receptor is activated, it first activates a G protein, to which it is coupled. The G protein in turn stimulates the formation of cAMP (cyclic adenonine mono phosphate) to send an electric signal to the brain. Axel and Buck published the fundamental paper jointly in 1991, and have since worked both together and independently.
Axel was born to Polish Jewish refugees in New York in 1946 and says the city is “my life”. He grew up in Brooklyn, but his school principal recognised his ability and insisted that he attend the respected Stuyvesant High School in Manhattan. Richard was upset, as the school had the worst basketball team in the city, but soon fell in love with art, literature and opera instead. From school, he went on to Columbia College, where he took a job washing glassware in the laboratory of Bernard Weinstein, who was working on the genetic code. Weinstein made him a research assist- ant and, after gaining his BA, Axel ended up at Johns Hopkins University School of Medicine, where he was, he admits “a terrible medical student”, but gained his MD in 1971, on the proviso that he never practice medicine on live patients.
Instead, he returned to Columbia as an intern in pathology. After a year, he was asked never to practice on dead patients. Thus he joined the genetics laboratory of Sol Spiegelman, where he finally felt at home. After a postdoctoral fellowship at the National Institutes of Health, working on DNA, he returned to Columbia in 1974, rising to professor in 1978. During the late 1970s, with Saul Silverstein and Michael Wigler, Axel patented a technique of cotransformation, a process which allows foreign DNA to be inserted into a host cell to produce certain proteins. In the 1980s, he began to consider brain function and perception. After working with Eric Kandel, Richard Scheller and others, he teamed up with Linda Buck to explore how the olfactory system works. As well as his work at Columbia University, where he continues to concentrate on the olfactory system, Axel is an investigator of the Howard Hughes Medical Institute. He has two sons and a partner, behavioral geneticist Cori Bargmann.
This text of the Nobel Laureate was taken from the book: "NOBELS. Nobel Laureates photographed by Peter Badge" (WILEY-VCH, 2008).