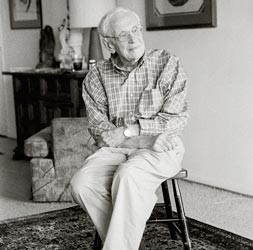 Ironically, Julius Axelrod wanted to become a physician, but was rejected from every medical school to which he applied.
He was born in 1912 in New York, where he gained a BSc at the city college in 1933, and in leisurely order, an MA at NYU in 1941 and PhD from the George Washington University in 1955. He was busy between degrees, however. From 1933–35 he was Laboratory Assistant at NYU Medical School; from 1935–46 he was Chemist at the Laboratory of Industrial Hygiene – during which time he attended night school to gain his Master’s degree and was blinded in his left eye in a laboratory accident; 1946 –1949, Research Associate, Goldwater Memorial Hospital; 1949–1950, Associate Chemist, National Heart Institute, NIH (promoted 1950 Chemist, 1953 Senior Chemist, and 1955 Chief of the Section on Pharmacology, Laboratory of Clinical Science, National Institute of Mental Health, Health Services and Mental Health Administration, Department of Health, Education and Welfare).
His work under Bernard Brodie at Goldwater Hospital set him on his research career path. They discovered why some non-aspirin analgesics caused blood disorders and recommended the use of the metabolite, acetaminophen (paracetamol) instead. At the National Heart Institute, he developed an interest in the sympathetic nervous system and its main neurotransmitters. He took a leave of absence in 1954 to gain his PhD, after which he continued with more advanced research.
Axelrod received his Nobel Prize in Physiology or Medicine (shared with Ulf von Euler of Sweden and Sir Bernard Katz of the UK) for his work on the release, reuptake and storage of the neurotransmitters epinephrine (adrenaline) and norepinephrine (noradrenaline). In 1957, Axelrod showed that such neurotransmitters are not wasted but recycled by the body. This research opened the door for the later development of selective serotonin reuptake inhibitors (SSRIs), such as Prozac, which block the reuptake of another neurotransmitter, serotonin. Axelrod also made major contributions to the understanding of the pineal gland and how it regulates sleep patterns by using melatonin to control the central nervous system. After receiving the Nobel Prize, Axelrod used his visibility to advocate several science policy issues and lent his name to protests against the imprisonment of scientists in the Soviet Union.
He was a member of several US and international medical and scientific boards, and received numerous accolades besides the Nobel Prize. Axelrod married Sally Taub in 1938; they have two children. He died on December 29, 2004. The National Library of Medicine is the repository for the Julius Axelrod Papers, which are currently being transferred to the internet.
Julius Axelrod died in 2004.