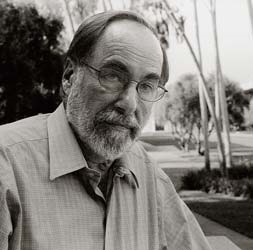 David Baltimore received the Nobel Prize in Physiology or Medicine at the relatively early age of 37 for the not-so-simple feat of turning the biological world on its head. For this he shared the prize with Renato Dulbecco and Howard Temin, although the work was done independently. In 1970, Baltimore discovered that certain viruses have an enzyme called reverse transcriptase, which transcribes RNA into DNA. At the time, the accepted biological dogma said that DNA led to RNA, which in turn led to proteins. By showing that the process could work in reverse, Baltimore not only upset conventional wisdom, but provided later scientists with an important factor in the understanding of the reproduction of such viruses, named retroviruses. An important example of such a virus is HIV.
Born in New York in 1938, Baltimore’s interest in biology began during a summer school at the Jackson Memorial Laboratory in Maine, where he first experienced research biology and saw research biologists at work. At Swarth- more College he began as a major in biology but switched to chemistry later so that he could carry out a research thesis. Another summer school, this time at the Cold Spring Harbor Laboratories working with Dr. George Streisinger, led him to molecular biology. Graduating in 1960, Baltimore went on to study biophysics at Massachusetts Institute of Technology, but left to work on animal viruses, first at the Albert Einstein Medical College and Cold Spring Harbor, then at the Rockefeller Institute where he gained a PhD in 1964. He then returned to the Albert Einstein College of Medicine to study virus-specific enzymes with Dr Jerard Hurwitz before joining the Salk Institute in La Jolla, California where he worked with Dr Renato Dulbecco.
He returned to MIT in 1968, where his research led to his Nobel-winning discovery, and in 1974 joined the staff of the MIT Center for Cancer Research. In 1975 Baltimore established the Whitehead Institute for Biomedical Research at MIT, named for its founding donor Jack Whitehead, pursuing a mix of immunology and virology. His team identified the so-called RAG protein pair that rearranges immunoglobulin genes. Their work also led to the development of the anti-cancer drug Gleevec. In 1990 Baltimore was made president of the Rockefeller Institute, but left a year later due to a scandal involving a paper on immunology which he co-authored in 1986. A researcher accused one of the other authors, Thereza Imanishi-Kari, of fabricating the data, which she denied. In 1996 the charges were finally dismissed.
Baltimore received the US National Medal of Science in 1999, and since 1997 has served as president of the California Institute of Technology. He is a member of the editorial board of Encyclopædia Britannica.
This text of the Nobel Laureate was taken from the book: "NOBELS. Nobel Laureates photographed by Peter Badge" (WILEY-VCH, 2008).