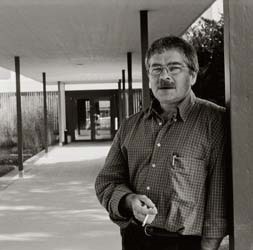 Johannes Georg Bednorz received his master's degree from the University of Münster in 1976 and his PhD from the Swiss Federal Institute of Technology, ETH Zurich, in 1982. In January 1982 he joined the IBM Zurich Research Laboratory in Rüschlikon, Switzerland, as a Research Staff Member.

His research in the area of solid state physics was focused on the investigation of structural phase transitions and ferroelectric properties of perovskite-type oxides. From 1983 on, he concentrated on the investigation of metallic oxides with the goal to develop superconductors with high transition temperatures. In 1987, he and K. Alex Müller were awarded the Nobel Prize in Physics for the discovery of high-Tc superconductivity in a new class of compounds.

He is a Distinguished Member of the Academy of Ceramics, Fellow of the American Physical Society and was elected as Foreign Associate of the U.S. National Academy of Sciences. He is also Honorary Member of the American Ceramic Society, and the Swiss Physical Society, and Honorary Fellow of the Fudan University, Shanghai, China and the Institute of Physics, Singapore. From the German Federal Republic he received in 1988 "Das Grosse Bundesverdienstkreuz mit Stern und Schulterband". 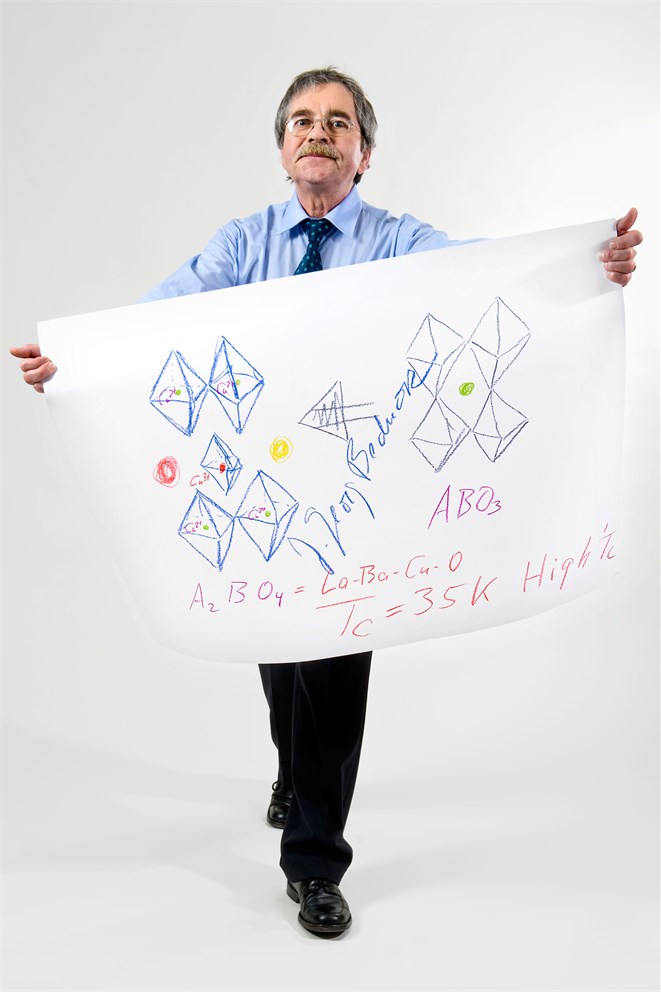 Johannes Georg Bednorz is not only a physicist, but he also takes a great
personal interest in art. His specialty is bronze sculpture, which he does in his
scarce free time. When I give him the paper and ask for the drawing, he takes
quite a bit of time, executing a precise sketch of the rhombic structures of
the superconducting materials he works with. I suggest that he
should combine science and art by making bronze sculptures in
the shape of superconducting crystal structures.
That would fi nally be meaningful art!

Nobel Prizes tend to be awarded quite a few years, and occasionally quite a few decades, after the discoveries which they celebrate. Alfred Nobel’s will stipulates that the Prizes should reward people who “during the preceding year, shall have conferred the greatest benefit to mankind,” and normally the benefit of discoveries takes a little time to be recognized. But just occasionally a fundamental discovery leads to immediate recognition. J. Georg Bednorz’s Nobel Prize in Physics, which he received, together with his senior partner Alex Müller, in 1987, was one such case. Their discovery of an entirely new form of ‘high temperature’ superconducting material had taken place just the year beforehand, in 1986.

Superconductivity occurs when electric current flows through a material with absolutely no resistance. It was first encountered in 1911 in liquid helium, at a temperature very close to absolute zero. Superconductivity is a property which kicks-in at low temperatures, and ever since 1911 the search was on for materials that would become superconductive at higher, more generally useful, temperatures. The temperature below which a substance switches to being superconductive is known as ‘Tc’, and, as Bednorz has indicated at the bottom of his sketch, the Tc for his new material was 35 Kelvin, 35 degrees above absolute zero. That is still only -238oC, and at first sight it might seem odd to describe this as being “High”. But that finding represented a sudden and significant step-up from the previous best of -250oC, leading rapidly to a host of still better Tcs.

Bednorz and Müller had achieved their breakthrough by manipulating the structure of an unlikely material; a type of ceramic insulator called perovskite, shown on the right of the drawing, together with its general structural formula (ABO3). As depicted, perovskite crystals consist of metal atoms incorporated within a three-dimensional network of octahedra formed from oxygen atoms. The large arrow to the left indicates Bednorz and Müller’s experimental transformation of this material from a 3-D network into a series of disconnected layers of octahedra, depicted running horizontally across the page. In parallel they changed the metal composition, adding barium to the mix of lanthanum and copper, which changed the charge state of some of the copper atoms present, from +2 to +3, as seen in the sketch. These changes made the materials superconducting, although the mechanism for that superconductivity remains uncertain to this day.