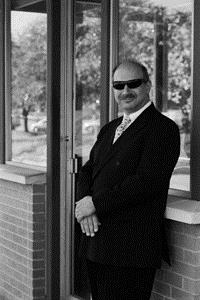 One half of the 2011 Nobel Prize in Physiology or Medicine was awarded posthumously to Ralph M. Steinmann, who died three days before the announcement. The remaining half was shared by Bruce Alan Beutler and Jules Hoffman for their independent work which, the committee said, ‘revolutionised our understanding of the immune system by discovering key principles for its activation.’

Beutler and his team, based at the University of Texas Southwestern Medical Center in Dallas and the Scripps Research Institute, La Jolla, California, use a technique called ‘forward genetics’ to examine how the immune system in mammals removes pathogens from the body, and identified the crucial ‘toll-like receptor’ that identifies invasive microbes.

Researching the biology of lipopolysaccharide (LPS), also known as endotoxin, Beutler was the first to isolate mouse tumour necrosis factor alpha (TNF) and demonstrated its important inflammatory role in endotoxin-induced shock. He designed recombinant molecules that neutralise TNF. These molecules are now used in the treatment of arthritis, Crohn’s disease, psoriasis and other forms of inflammation.

Beutler went on to work out how LPS triggered the immune cells. By cloning the Lps locus, within which mutations had been known since the 1960s to prevent responses to LPS, he identified a ‘toll-like receptor’ (TLR4) which senses the presence of invading microbes bearing LPS. Receptors of the same family, ten of which are now known to exist in humans, each ‘tuned’ to detect different kinds of mi-crobes, also initiate inflammation to combat infection, but sometimes shock as well. It was for this work that Beutler won the Nobel Prize, and his team at the University of Texas Southwestern Medical Center continues to search for proteins that protect mammals against defined infections. In the pro-cess, they have identified genes required for other functions, including the regulation of iron absorp-tion, hearing and the development of embryos.

Bruce was born in Chicago in 1957 but grew up in a suburb of Los Angeles, where he attended Pasadena Polytechnic and developed an early interest in biology from working in the laboratory with his father, Ernest Beutler, who was also a distinguished biomedical scientist. Later, both Beutlers chaired separate departments at The Scripps Research Institute.

Bruce went on to study biology under geneticist Daniel Lindsley at UC San Diego, graduating at 18, and worked briefly with three people whose expertise would shape his career: mammalian geneticist Su-sumu Ohno, LPS expert Abraham Braude and later with herpes simplex virus specialist Patricia Spear. From 1977-81 Beutler attended medical school at Chicago. Despite missing lab work, after graduating he followed his father’s advice to work as an intern at the University of Texas Southwestern Medical Center in Dallas. In 1983, he moved to the Rockefeller University in New York where he returned to lab work with a vengeance and had early success with isolating a lipolytic hormone then known as cachec-tin, which he showed to be identical to TNF, and an important component of the body’s response to LPS.

In 1986, Beutler returned to Dallas to set up his own lab at the Howard Hughes Medical Institute, where the team discovered TLR4 in 1998. In 2000, Beutler moved his team to The Scripps Research Institute in California, where they collaborated with other groups, notably those led by Shizuo Akira and fellow laureate Jules Hoffman, who was carrying out similar work with fruit flies. In 2011, Beutler returned to Dallas where at UT Southwestern he has developed a Center for the Genetics of Host Defense. 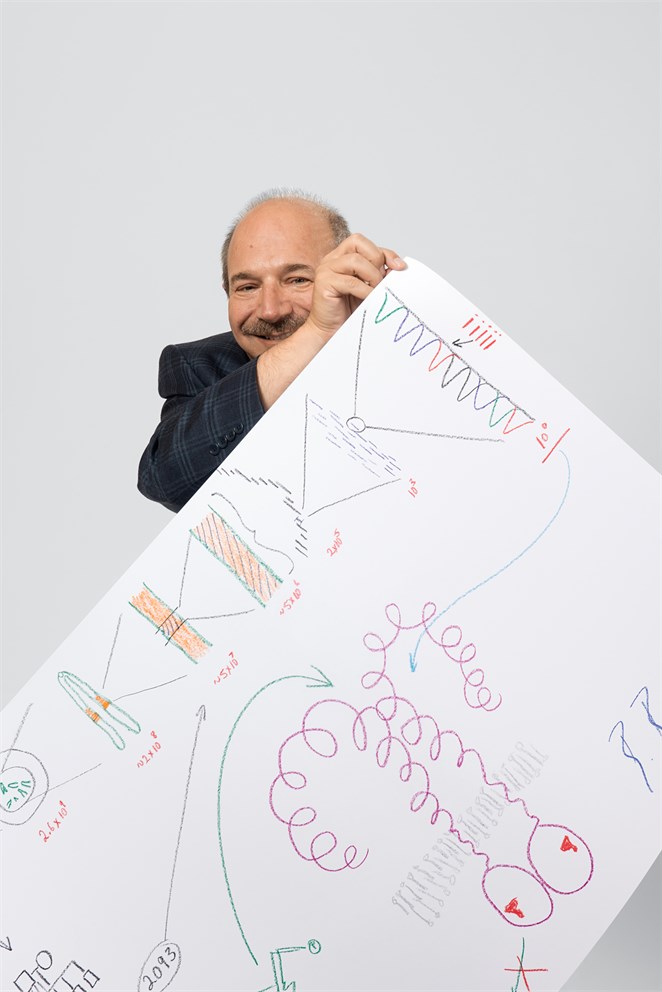 Bruce Beutler with his "Sketch of Science"

Bruce Beutler has been warned about my project, he had seen some pictures of this series in an exhibition. The result is:
Perfectionism!
His sketch presents his discovery in a way that would shame some textbooks. But when the shooting starts, we see a different Bruce Beutler: Quirky!

Finding a Needle in a Haystack

“This was a continuous process of zooming in and zooming in and zooming in,” recalls Bruce Beutler when reviewing his drawing, “to go from a whole animal that had a particular phenotype down to finding one aberrant nucleotide.” The whole animal he refers to was the mouse shown top left, which displayed a mysterious resistance to the bacterial product called lipopolysaccharide, LPS for short, a toxin that normally causes septic shock. Beutler and his team set out to find the origin of that resistance, sifting through ever smaller regions of the mouse’s genome in pursuit of a protective mutation. That search, depicted along the top of the sketch, took five years.

The sequence of drawings shows the various stages of the hunt. Starting at the level of the chromosomes, shown in green, containing 2.6 billion base pairs of DNA, they had to identify which chromosome, and then which part of that chromosome, might contain the key sequence. Drilling down further they obtained a manageable segment to work with; a piece they could clone. This region, shown with cross-hatching, contained about five million base pairs. Cloning it into the overlapping chunks shown as little black lines, each containing up to 200,000 nucleotides, and then sequencing those chunks, took about three years, a period Beutler described as “Very dry years where we didn’t really find anything!” Then, in almost the very last piece they looked at, they finally hit upon the key mutation. Note those five red exclamation marks highlighting a peak in the DNA sequence trace, one base pair out of the 2.6 billion!

This mutation appeared in a sequence that coded for a protein that turned out to be the receptor for LPS, depicted by the squiggly lines in the centre of the picture. Signalling in response to LPS is blocked by the mutation, explaining why these mice were insensitive to its effects. Beutler’s discovery of the LPS receptor had revealed, for the first time, the sensor for one of the body’s two major lines of immune defence: innate immunity.

Asked about the remarkable precision of his sketch, Beutler says, “I have to admit I tore one of these up before I made this one. So there was, in a way, a draft. But I’m the type of person who tends to form a sentence in his mind before speaking it, and that’s just the way I’ve always been.”