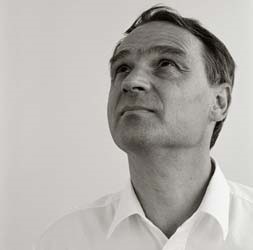 Gerd Binnig is a German-born physicist who shared one of the 1986 physics prizes with his Swiss colleague Heinrich Rohrer for their invention of the scanning tunneling microscope (STM).
Binnig was born in Frankfurt in July 1947 and until the age of 31, lived partly in Frankfurt and partly in nearby Offenbach. He decided as a child that he wanted to be a physicist but admits to early doubts because of its technical and ‘unimaginative’ nature – at the time, he preferred playing in a beat-band. He persevered, however, gaining a BSc and a doctorate from the Johann Wolfgang Goethe University of Frankfurt in 1978, admitting: “I realized that actually doing physics is much more enjoyable than just learning it”. In 1969, Binnig married psychology student Lore Wagler (they have two children). It was she, as his “private psychotherapist”, who convinced him to accept an offer from the physics group at IBM Zürich Research Laboratory in 1978. There he met Heinrich Rohrer, whose “way of viewing physics, combined with his humanity and sense of humor, fully restored my somewhat lost curiosity in physics”.
Binnig and Rohrer designed and built the first scanning tunnelling microscope (STM), which forms an image of individual atoms on a metal or semiconductor surface by scanning the tip of a tungsten needle over the object at a height of only a few atoms above its surface. The distance between the needle and the scanned object is kept constant by a sensitive electrical current. The STM produces topographical maps of the object’s surface in such fine detail that individual atoms can be clearly identified. The STM is widely used in both industrial and fundamental research to obtain atomic-scale images of surfaces.
In 1984 Binnig joined the IBM Physics Group in Munich, moving to IBM’s Almaden Research Center in San Jose, California, from 1985–86, and was a visiting professor at nearby Stanford University from 1987–88. Binnig was appointed an IBM Fellow in 1987, the company’s highest honour for technical and scientific achievement. In 1989 he published the book Aus dem Nichts (Out of Nothing), which argued that creativity grows from disorder. In 1990 he joined the Supervisory Board of the Daimler Benz Holding and in 1994, with science journalist Dieter Herold, he set up Definiens AG, initially as a research institute. The company has developed, oddly perhaps, into a business data analysis service, and Binnig remains on the board of directors. Before receiving the Nobel Prize, the inventors of STM were awarded the German Physics Prize, the Otto Klung Prize, the Hewlett Packard Prize, and the King Faisal Prize.
This text of the Nobel Laureate was taken from the book: "NOBELS. Nobel Laureates photographed by Peter Badge" (WILEY-VCH, 2008).