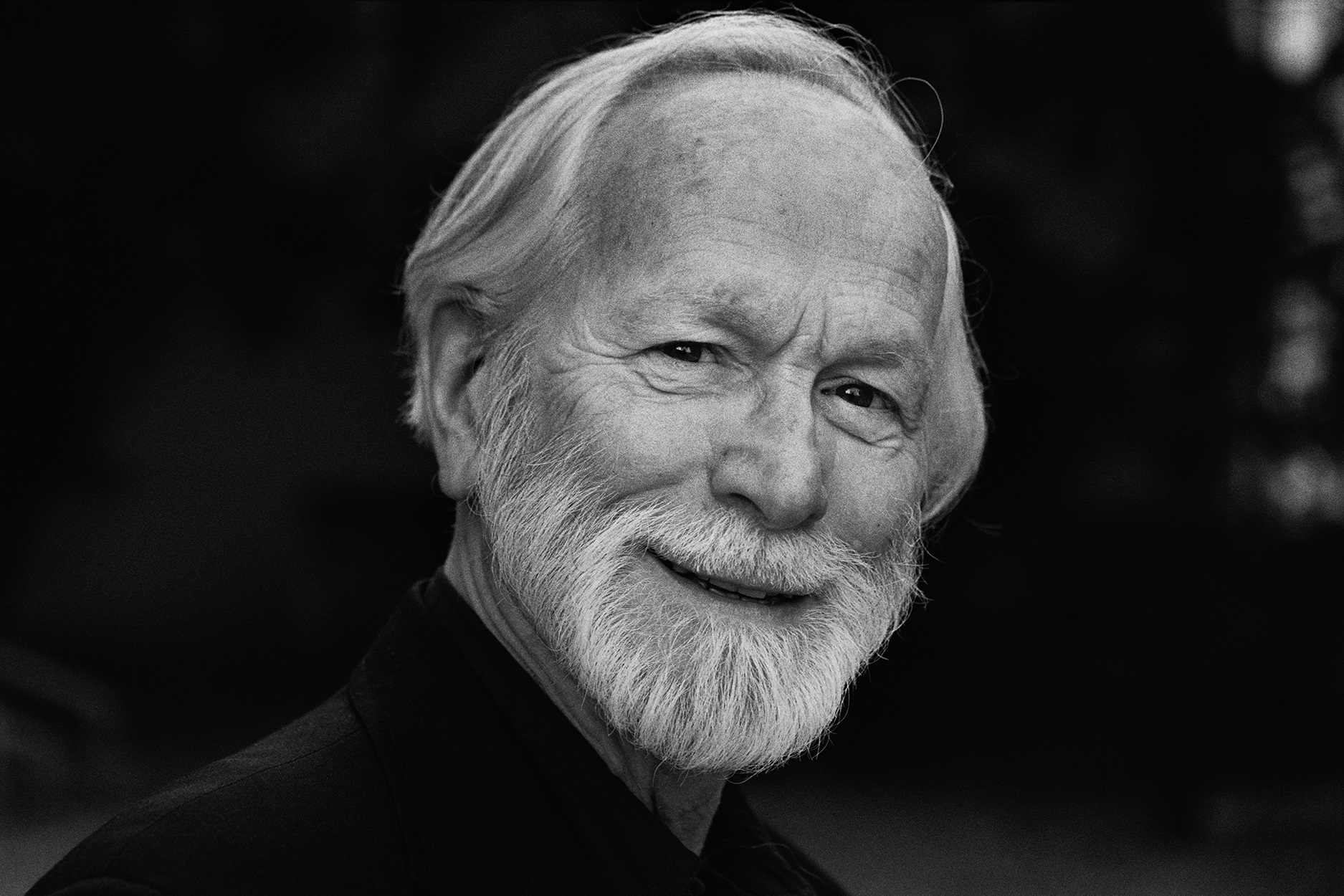 John Michael Bishop and Harold Varmus, colleagues at the University of California School of Medicine in San Francisco, shared the 1989 Nobel Prize in physiology or medicine “for their discovery of the cellular origin of retroviral oncogenes”. This large family of genes controls the normal growth and division of cells (‘onco’ is Greek for bulk or mass). Disturbances in these oncogenes can lead to transformation of a normal cell into a tumour cell and result in cancer. The term oncogene was introduced in the 1960s to denote special parts of the genetic material of certain viruses. The first oncogenic virus was discovered by Peyton Rous in 1910. ‘Rous sarcoma virus’ is a retrovirus, which uses a reverse transcriptase enzyme to turn infected RNA (ribonucleic acid) into DNA (deoxyribonucleic acid), effectively integrating the virus into the body’s make-up.

Through their investigation of the Rous sarcoma virus, Bishop and Varmus demonstrated the origin of oncogenes. Their work has increased knowledge about tumour development and the systems that govern the normal growth of cells. Bishop was born on February 22, 1936 in York, Pennsylvania, the son (one of three children) of a Lutheran minister and had little contact with city life until his early 20s. He attended rural schools but was a keen student and, inspired by the family doctor, entered Gettysburg College to study chemistry, intent on a medical career. He graduated in 1957 and went on to Harvard Medical School. Bishop married his sweetheart from Gettysburg, Kathryn Putman and they have two sons. He also developed a passion for molecular biology and took a course in animal virology. He graduated in 1962 and joined the Massachusetts General Hospital as a house doctor for two years before beginning research at the National Institutes of Health in Bethesda, Maryland. In 1968, after a year’s sabbatical to Hamburg, Germany, Bishop joined his former mentor Leon Levintow at UCSF. It was there that he also met Warren Levinson, who was studying the Rous Sarcoma Virus. The trio joined forces but it was Howard Temin and David Baltimore who discovered reverse transcriptase.

Bishop continued his work, however, and was joined in 1970 by Harold Varmus. Together (and aided by Dominique Stehelin, Deborah Spector and Peter Vogt) they used one variant of the Rous virus that contained an oncogenic gene and another which did not in order to construct a nucleic acid probe that identified the oncogene in different species throughout the animal kingdom. They published their findings in 1976. Bishop rose to Professor of Microbiology and Immunology at UCSF and director of the GW Hooper Research Foundation and of the educational Program in Biological Sciences. He is chancellor emeritus and professor emeritus at UCSF. He has collected numerous awards, mostly with Varmus, and is a member of several American scientific academies and societies. 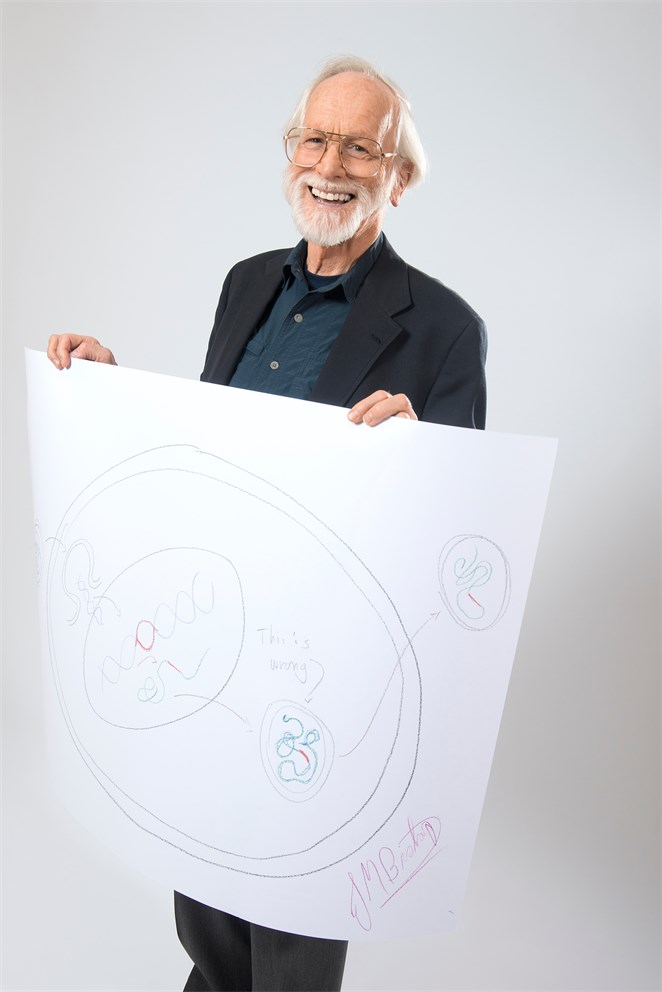 J. Michael Bishop with his "Sketch of Science"

Bishop really wants to get it right. Four of my nice, big folios go into the bin before he is ready for the camera. Then he finds another imperfection in his sketch: „This is wrong!“ he says. „Just write it on your sketch!“ I suggest. And so he did...!

Look at Volker Steger’s portrait of Michael Bishop, and note particularly that big smile on his face! “I was happy because I was done with it!” Bishop recalls. “I must have made 20 of the damn things and destroyed them before I finally threw in the towel and didn’t do another one. In my haste and frustration I made an error, so I just wrote “This is wrong!” I’m grinning because I’m finished. I have no artistic skills whatsoever. I was throwing paper away right and left. Three other people came in and left while I was doing mine! In other words, they got theirs done. As I remember it, it was humiliating.”

What Bishop’s ultimately successful drawing illustrates is the way that a cellular gene makes its way into the genome of a virus. In the centre, with two lines around it, is a cell. Coming in from the left is a retrovirus, containing single stranded RNA. When the virus enters the cell it opens up and, reversing the normal sequence of events, hijacks the cell’s machinery to get it to convert its viral RNA into double-stranded, viral DNA. This viral DNA makes its way into the cell’s nucleus (surrounded by the single line), becoming assimilated into the cell’s own DNA. But occasionally, during this intimate association of DNA derived from cell and virus, an accident can occur, with a cellular gene (shown here in red) being transferred into the virus’ genetic material. Continuing towards the right, as new virus particles are produced they now carry the red, cellular gene along with them in their single stranded RNA, ready to infect another cell, but this time with a new genetic element included. “This is wrong” refers to the fact that the full virus particle doesn’t actually get formed until it emerges from the cell, as Bishop has correctly shown at the top right.

By elucidating this process, Bishop and his colleague Harold Varmus explained the origin of the cancer causing ‘oncogene’ in a chicken cancer virus. Their discovery led to the identification of dozens of other viruses that also had cancer genes taken from the cellular genome. An important consequence of these findings was the demonstration that normal cellular genes could potentially become oncogenes when polluted in some way, a view that now provides the underpinning for our thinking about the genetic origins of cancer.