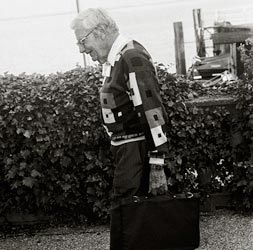 Nicolaas Bloembergen was a Dutch-born American physicist who shared one of the two 1981 physics prizes with Arthur Schawlow, (working independently) for their work on laser spectroscopy.

Born in March 1920, in Dordrecht, Netherlands, Bloembergen was the second child of six. His father was a chemical engineer, his mother a French teacher-cum-housewife. The family moved to a suburb of Utrecht, and Nicolaas attended the municipal gymnasium where he developed an interest in science and maths. He entered the University of Utrecht in 1938, but his studies were disrupted by the German occupation, and he just managed to graduate before the Nazis closed the university in 1943. He spent the rest of the war “hiding indoors, eating tulip bulbs to fill the stomach and reading Kramer’s book Quantum Theorie des Elektrons und der Strahlung by the light of a storm lamp".

With Europe in ruins, Bloembergen applied to continue his education at Harvard. He arrived six weeks after Purcell, Torrey and Pound had detected nuclear magnetic resonance (NMR) in condensed matter, and he was taken on as an assistant to develop the early NMR apparatus. Bloembergen was invited to the Dutch University of Leiden in 1947, and his PhD thesis on NMR was published both there and at Harvard, where he returned in 1948 to join the faculty, becoming a professor in 1951 and Gerhard Gade professor in 1980. While in Holland, he met student Huberta Deliana ‘Deli’ Brink. They married in 1950 and have a son and two daughters. The couple became US citizens in 1958.

Bloembergen’s research on NMR led to an interest in masers, which were introduced in 1953. A maser produces electromagnetic waves through ‘microwave amplification by stimulated emission of radiation’. By 1960, optical masers had been developed on the same principle, but using light, hence ‘laser’. He experimented with microwave spectroscopy, and in 1956 developed a crystal maser, vastly more powerful than the standard gaseous version. With the advent of the laser, he developed laser spectroscopy, which allows precise observations of atomic structure, and in 1961 devised a program of ‘nonlinear optics’ – a theoretical approach to the analysis of how electromagnetic radiation interacts with matter. It was for this research that he received the Nobel Prize.

Nicolaas Bloembergen passed away on 5 September 2017, at the age of 97.