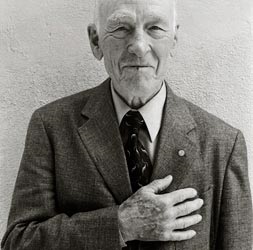 Born in Provo/Utah (USA) on July 31, 1918, he studied chemistry at Brigham Young University (BYU). Upon graduation he considered working as an analytical chemist or going to medical school. Instead, notice of a scholarship, funded by patents on the irradiation of milk to produce vitamin D, changed his plans. At the age of 21 he married his college sweetheart and embarked on graduate studies in biochemistry at the University of Wisconsin. There he almost died of a perforation of the appendix: “I was saved with sulphonamides that had been recently discovered by Domagk (Nobelist).”

At Wisconsin he first learned about the key substance in bioenergetics, ATP (adenosine triphosphate). After receiving his PhD in 1943 he worked at Stanford University with a research project on blood proteins for treatment of war wounded. In 1947 he joined the biochemistry faculty at the University of Minnesota, and initiated studies on how ATP was made using the isotope 18 0. He was on a sabbatical in the laboratory of Hugo Theorell in Sweden when Theorell received a 1955 Nobel Prize. In 1963 his “latent California Virus” (as he called it) promoted his joining the faculty of the University of California in Los Angeles. There from three decades of research he proposed a “binding change mechanism” for the enzyme that makes ATP. In 1994 John Walker at Cambridge reported the structure of the enzyme that supported Boyer’s proposal. Walker, Boyer, and the Danish researcher Jens Skou shared the 1997 Nobel Prize in Chemistry for their studies with ATP.

It was in the early 1950s that Paul Delos Boyer began to research how cells form adenosine triphosphate (ATP) – an energy-storage molecule which fuels the metabolic processes of the cells of all living things. His later research in the 1970s revealed what is involved in ATP synthesis. Boyer postulated the ‘binding change mechanism’ to explain the way in which the enzyme ‘ATP synthase’ functions. He shared one of the two 1997 Nobel Prizes in Chemistry with John Walker of Cambridge, UK, whose later experimental research partially confirmed Boyer’s theory.

Boyer was born and raised in Provo, Utah, a city of 15,000 people which had only been founded about 70 years before his birth in 1918. He attended Provo High School, gained a BSc in chemistry at the local Brigham Young University in 1939, and obtained a scholarship to study biochemistry in Wisconsin. Five days before leaving, he married fellow student Lyda Whicker (they have three children and several grandchildren), with whom he later edited an 18– volume series, The Enzymes. At Wisconsin he worked under Paul Phillips and mingled with such biochemical giants as Otto Meyerhof, Fritz Lipmann, and Carl Cori, while exploring enzymes and metabolism. Boyer developed the use of dicoumarol as a rat poison and as an anticoagulant. He gained his PhD in 1943 and spent the war years at Stanford University, working on albumin serum for transfusions.

After a brief post-war stint in the navy, Boyer became an assistant professor at the University of Minnesota, where he devised new methods for investigating enzyme mechanisms. In 1955 he received the American Chemical Society Award in Enzyme Chemistry, and a Guggenheim Fellowship to Sweden, working at the Wenner-Gren Institute and at the Nobel Medical Institute, with Hugo Theorell, who received a Nobel Prize that year. When he returned in 1956 he was made a professor and gathered a strong group of assistants, many of whom he took with him when, in 1963, he moved to the University of California in Los Angeles (UCLA) as professor and director of a new Molecular Biology Institute.

In 1970 his team recognised the first of three main postulates of what was to become the binding change mechanism for ATP synthesis, namely that energy input was not used primarily to form the ATP molecule, but to promote the release of an already formed and tightly bound ATP. Boyer retired in 1990, and lives in the hills above UCLA in a house he partly built himself. In 1959–60, Boyer served as biochemistry chairman of the American Chemical Society and in 1969–70 as president of the American Society of Biological