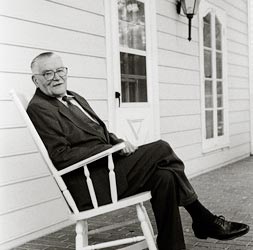 James McGill Buchanan, Jr. received the 1986 economics award “for his development of the contractual and constitutional bases for the theory of economic and political decision-making”. Traditional economic theory explains how consumers and entrepreneurs make decisions regarding purchase of goods, choice of work, production, investments, etc. Buchanan developed a corresponding theory, called The New Political Economy or Public Choice, of decision-making in the public sector. His theoretical formulation blended economics and political science, transfer- ring the concept of gain from mutual exchange between individuals to the realm of political decision-making, turning the political process into a means of cooperation aimed at achieving reciprocal advantages.

Sadly, for the yawning chasm of the US political divide, the process depends on “rules of the game”, i.e., the constitution in a broad sense and the possibility of constitutional reforms. As Buchanan rues, it is often futile to advise politicians or influence the outcome of specific issues. Buchanan’s foremost achievement is that he has consistently emphasised the significance of fundamental rules and used his method with great success in the analysis of many specific problems and issues.Buchanan was born in Murfreesboro, Tennessee, in 1919. He gained a BA at Middle Tennessee State College in 1940, an MS at the University of Tennessee in 1941 and – after five years in the navy during the war – a PhD at the University of Chicago in 1948.

He taught at a number of universities from 1950 to 1969, including the University of Virginia (where he founded the Thomas Jefferson Center), and UCLA. From 1969–83 he was distinguished professor of economics at the Virginia Polytechnic Institute, where he co-founded the Center for Study of Public Choice, before moving with the CSPC to George Mason University in Fairfax, Virginia. Buchanan wrote a number of significant books, the best known of which is The Calculus of Consent: Logical Foundations of Constitutional Democracy (1962), with Gordon Tullock. He acknowledges the influence of Swedish economist Knut Wicksell, saying: “Many of my contributions, and especially those in political economy and fiscal theory, might be described as varied reiterations, elaborations, and extensions of Wicksellian themes”.