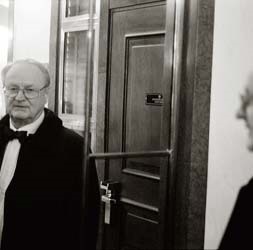 The human brain carries more than a hundred billion nerve cells, connected by chemical transmitters through myriad contact points or synapses. Arvid Carlsson, and Eric Kandel and Paul Greengard of the USA, made pioneering discoveries concerning ‘slow synaptic transmission’ that have been crucial for an understanding of brain function. These findings have resulted in the development of new drugs to help combat neurological and psychiatric diseases.
Arvid Carlsson performed a series of studies in the late 1950s that showed dopamine to be a transmitter in the brain. It was previously thought to be merely a precursor of the transmitter noradrenaline. Carlsson found that dopamine was concentrated in other areas of the brain, particularly the basal ganglia, showing its importance for our ability to control movements. His research led to the discovery that Parkinson’s disease is caused by a lack of dopamine in certain parts of the brain and the development of dopamine precursor L-dopa as a remedy.
Carlsson’s research also showed that antipsychotic drugs, mostly used against schizophrenia, affect synaptic trans- mission by blocking dopamine receptors. His discoveries have helped the treatment of depression, with the development of a new generation of antidepressive drugs.
Carlsson was born in Uppsala, Sweden, in 1923, moving three years later to Lund, where his father was a history professor. His mother also had a keen interest in research. In 1941 Carlsson enrolled at Lund University to study medicine. Because of the war, his studies were interrupted several times by military service. Aiming at medical research, in 1944 he joined the department of pharmacology, and gained his MD in 1951 with a thesis on the absorption of calcium in the skeleton. In a related vein, he is opposed to the fluoridation of drinking water, claiming it offers no real benefit, causes adverse reactions in some people and pollutes the environment. Carlsson became an assistant professor at the University of Lund in 1951 and associate professor there 1956. In 1959 he became a professor at the Göteborg University.
He has accumulated a raft of awards, memberships and degrees, including the Swedish His Majesty, The King’s Medal in 1978. In 2002, the medical foundation Arvid Carlsson Fonden was established.