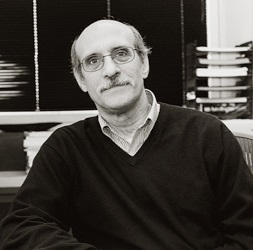 The Nobel Prize has several rules which often leave great work unrecognised. It is not awarded posthumously, for example, and there can only be three recipients for each category.Thus in 2008 the vital contribution of Douglas Prasher was overlooked by the committee, but not by the recipients. In 1992 Prasher, a researcher at the Woods Hole Oceanographic Institution in Massachusetts, isolated the gene that caused green fluorescent protein to glow. Sadly his discovery only came at the end of three years of funding by the American Cancer Society and he had to leave his research position. Nonetheless, he freely gave the gene to both Martin Chalfie and Roger Tsien, both of whom invited him to the ceremony to thank him. Chalfie used the gene to demonstrate the value of GFP as a luminous biological marker that could be activated by blue light to give green light.

Chalfie’s interest in GFP was sparked by a 1989 seminar by Paul Brehm about bioluminescent organisms in which Brehm talked about GFP. Chalfie and members of his lab showed that expression of the GFP gene in bacteria or in the nematode produced a fluorescent protein without the need of any other components. This research was described in "Green Fluorescent Protein as a Marker for gene expression," a paper published in 1994 and co-authored with others including Prasher. This paper is one of over 80 research articles authored by Chalfie and coworkers.

Martin Chalfie was born in Chicago in January 1947 and went to Harvard in 1965. He initially intended to study mathematics but soon switched to biochemistry. A summer filled with failure working in a lab after his third year in college convinced him that he was not meant to be a scientist. After graduating college in 1969, he worked in a series of one-month jobs as, for example, a janitor, a factory worker, and a dress salesman. He also organized rock concerts in the parks of Cambridge, MA before teaching high school. The renewed confidence he obtained from successful summer research in a lab at Yale in 1971 motivated him to apply to graduate school. He returned to Harvard where he obtained his Ph.D under Robert Pelman in 1977.

He performed post-doctoral research on C. elegans at the Laboratory of Molecular Biology in Cambridge, England, with (2002 laureates) Sydney Brenner and John Sulston. In 1982 Chalfie joined the faculty of Columbia University in New York where he performed his Nobel Prize-winning as well as research on neuronal differentiation and mechanosensation. He is now a University Professor at Columbia, which is also the home for his wife and colleague Tulle Hazelrigg. Hazelrigg was the first person to make a GFP protein fusion, allowing a protein to be followed in a living organism simply by watching for its green fluorescence.

Chalfie was elected to the National Academy of Sciences in 2004 but another telling accolade was the Harold S. Ulen trophy he received as captain of the Harvard swimming team for his ‘leadership, sportsmanship and team cooperation’ – qualities he displayed by freely passing on his work to other researchers, just as he had received the baton from Douglas Prasher. Since 2014 he chaired the Committee of Human Rights of the National Academies of Sciences, Engineering and Medicine. 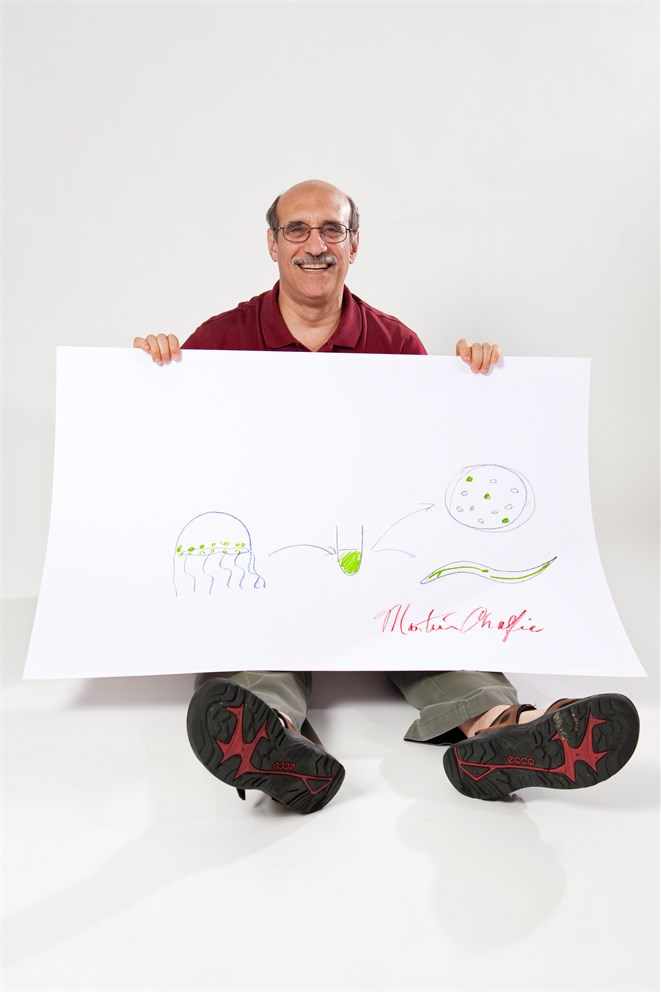 Me: “So, where do you work?”
Him: “Work? I only have an academic affi liation!”
At least today he doesnʼt look like work. But his drawing
does. He draws a fl uorescent protein from a jelly-fi sh that
marks genes in a worm: And it becomes a glowing worm!
This is stunning, right? So, dear readers, look at this drawing
and donʼt stare at Martin Chalfi eʼs sandals!

Lighting the Path to Discovery
by Adam Smith

This story begins in the early 1960s when Osamu Shimomura was interested in the problem of bioluminescence; how do some organisms produce light? Illustrated in the left-hand part of the image is a glowing jellyfish that emits green light from certain cells. But Shimomura’s initial studies isolated a bioluminescent protein that gave off not green, but blue light. Looking further he found that this blue light was absorbed by another protein, which in turn re-emitted the green light that we observe. Shimamura’s new protein, later called green fluorescent protein (GFP), and shown in the test tube in the picture, had this wonderful property that when you shone blue light on it gave you green light back. The discovery of GFP earned Shimamura his share in this Nobel Prize.

Martin Chalfie heard about Shimomura’s work in a talk in April 1989, and realized that GFP’s properties could make it an ideal cellular beacon for the transparent model organisms he studied. So the right-hand side of the picture describes the work done in Chalfie’s laboratory in collaboration with Douglas Prasher, the person who isolated the DNA encoding the protein GFP. Chalfie first put this DNA into bacteria, and top right you see colonies of bacteria growing on a plate. Some of the colonies are now making GFP, so shining blue light on them makes them glow brightly green.

Next they took the DNA and put it into the animal they had been studying, the nematode worm Caenorhabditis elegans. Introducing GFP into only certain nerve cells meant that they could now observe those nerve cells individually glowing green when they shone blue light on the worms. Demonstrating that you could label cells or parts of the cells with this fluorescent protein opened up the possibility of following biology in living tissues. For the first time researchers could observe processes as they change, whether it was cell division, changes in organelles within the cell, or cells migrating and developing.

“One of the things the GFP story says to me very strongly is that one needs to study all of life,” says Chalfie. “Shimomura was studying a very fundamental problem that has actually nothing to do with human biology, human health; and that is how do some organisms generate light? And this basic research has proven to be exceptionally useful