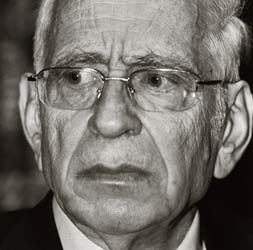 Yves Chauvin, of the Institut Français du Pétrole, Rueil-Malmaison, shared the 2005 chemistry prize with Americans Robert Grubbs and Richard Schrock for ‘the development of the metathesis method in organic synthesis’. Metathesis (lit. ‘change-places’) is one of organic chemistry’s most important reactions. In metathesis reactions, bonds are broken and made between the carbon atoms that are the basis of all organic life, allowing atom groups to change places. This happens with the assistance of special catalyst molecules. In 1971 Yves Chauvin was able to explain in detail how metathesis reactions function and what types of metal compound act as catalysts in the reactions.
Schrock was the first to produce, in 1990, an efficient metal-compound catalyst for metathesis. Two years later Grubbs developed a better, more stable, catalyst. Metathesis was already used, mainly for pharmaceuticals and plastics, but the trio’s work has made the process simpler, more efficient and more environmentally friendly. Their discoveries suggest fantastic opportunities for producing new molecules artificially through organic synthesis.
Chauvin was born in Menin, western Flanders, in 1930 on the border between Belgium and France. He went to pre- school in Flanders and then the French primary school, crossing the border every day. He admits to choosing chemistry “rather by chance”, and was not a brilliant student at the Lyon’s School of Chemistry, Physics and Electronics. He gained a degree in 1954, but regretted missing the opportunity to take a PhD, largely due to his military service. Instead, he took a job in industry, but soon resigned, exasperated by the entrenched and unadventurous attitude of his managers.
Chauvin joined the Institut Français du Pétrole in 1960 and explored the area of coordination chemistry, organometallics or homogeneous catalysis by transition metals. He “unwittingly” became the French specialist in these disciplines and developed two homogeneous catalysis processes: Dimersol, using a nickel-based catalyst, is used in chemistry and to boost octane in fuel, and Alphabutol, using a titanium-based catalyst. He later adapted the Dimer- sol system, creating the non-homogeneous smaller-run process Difasol, (small batches of chemical being favoured for safety reasons). After retiring in 1995, he continued to work in J-M Basset’s laboratory in Lyon. Chauvin is honorary research director at the Institut Français du Pétrole, a member of the French Academy of Science and emeritus director of research in the organometallic chemistry laboratory of CNRS/CPE Lyon. Recently he has developed a novel area of homogeneous catalysis in molten salts. He married in 1960 and has two sons and five grandsons.
This text of the Nobel Laureate was taken from the book: "NOBELS. Nobel Laureates photographed by Peter Badge" (WILEY-VCH, 2008).