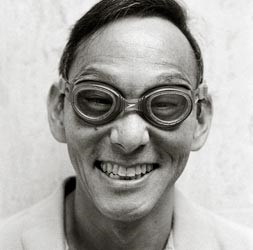 Steven Chu was born in St. Louis on February 28, 1948. He received bachelor degrees in mathematics and physics at the University of Rochester in 1970, and a Ph. D. in physics from the University of California, Berkeley in 1976. After two years as a postdoctoral fellow, he joined AT&T Bell Laboratories, and in 1987, became professor of Physics and Applied Physics at Stanford. In 2004, he became director of Lawrence Berkeley National Laboratory. From 2009 to 2013, he served as United States Secretary of Energy and the first scientist to hold a Cabinet Position. He is now professor of Physics and professor of Molecular & Cellular Physiology in the Medical School at Stanford.

Chu was awarded the 1997 Nobel Prize in Physics along with William Phillips and Claude Cohen-Tannoudji for developing “methods to cool and trap atoms with laser light”. At Bell Laboratories, Chu and colleagues cooled atoms in “optical molasses” to 240 millionths of a degree above absolute zero. With a single focused beam, the trapped atoms in “optical tweezers” and demonstrated the magneto-optic trap. With Art Ashkin, he demonstrated the optical tweezing of sub-micron particles in water. At Stanford, he demonstrated the first atomic fountain, and atom interferometry based on optical pulses of light. With optical tweezers, Chu introduced methods to simultaneously visualize and manipulate single bio-molecules. This work led to studies in polymer dynamics that included the direct observation of “reptation” of an individual polymer in a polymer solution, and the observation of hysteresis in the coil-stretch phase transition of a polymer.

Chu and his collaborators performed the first single molecule studies of the actin-myosin molecular motor system, the unfolding and refolding of RNA along multiple pathways, the translation of the ribosome, the unzipping of DNA by helicase enzymes, and the transcription of RNA Polymerase II. His current research includes the development of photostable nanoparticles that allow millisecond, nanometer imaging in live cells, biomedical imaging, batteries and other applications of electrochemistry. Chu helped launch Bio-X at Stanford University, a multi-disciplinary program that combined the physical and biological sciences with medicine and engineering. 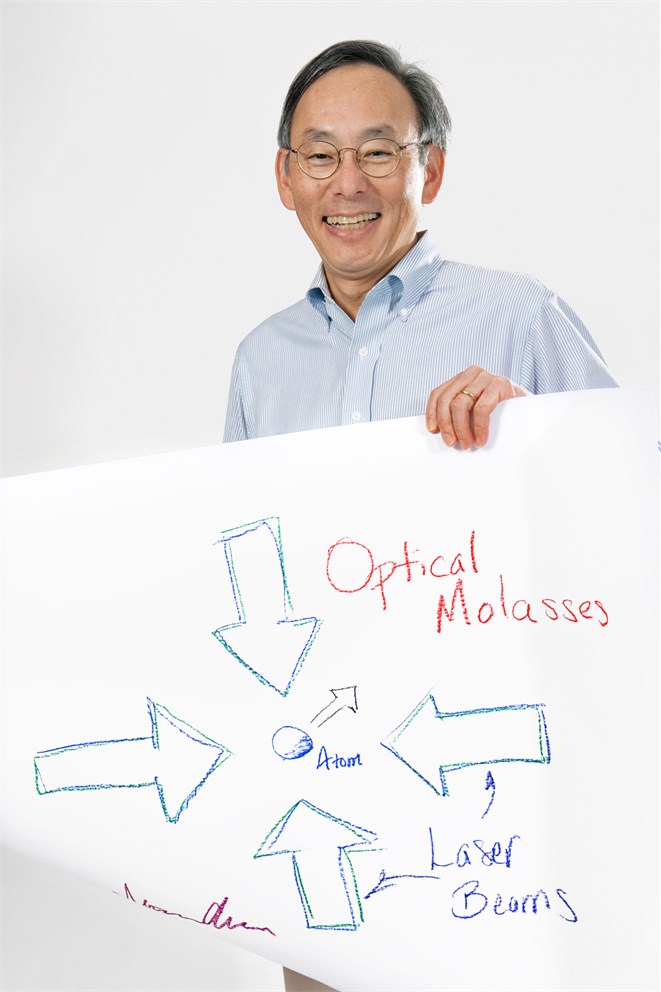 Chu is a busy man. So, there is not much time for a Nobels-draw-pictures photo
project! He thinks carefully before starting the drawing, contemplating the
white paper for a little while. Then, with carefully chosen colours, he executes
a precise drawing of his “atom trap”. I tell him that I have photographed other
laureates whose work is related to his fi eld.
“Yeah”, he says, “now they are all using this thing!”

You’re witnessing the manipulation of matter by light. Focus on that atom trapped in the centre of the drawing, where these four laser beams come together (actually there were six laser beams in the experiment, but two are directed along the z axis, out of the plane of the paper). It has encountered what Steven Chu has called ‘optical molasses’, a glue made of light that has slowed it down from travelling at, say, twice the speed of sound to meandering around at about 10 centimetres a second. This is an example of optical cooling of atoms, the ‘cooling’ referring to the reduction in the kinetic energy of the atoms caught in the trap.

So cooling atoms means reducing the random velocity of all the atoms in the sample. And although each little impulse of a photon in a laser beam scattering off an atom won’t affect the atom very much at all, if you average the effect of millions of impacts a second, then the light can have a profound effect. The trick in this technique, however, is to tune down the frequency of the lasers to take account of what’s known as the Doppler shift. Since the atoms are moving, they ‘see’ a slightly different frequency of laser light than that set by the experimenter, in just the same way as a fast-moving train coming towards you makes a higher pitched noise than that same train as it moves away from you. This Doppler shift in frequency can be used to advantage here. By suitably adjusting the laser frequency, the experimenter can ensure that the atoms will encounter a greater ‘push’ from the laser beams they are travelling towards, than the laser beams they are travelling away from. And that way, whichever way they drift, the atoms are always, on average, pushed back into the centre of the trap. The technique, therefore, is known as ‘Doppler cooling’.

The method is now being used for a wealth of applications such as making better atomic clocks, measuring very small changes in gravity and looking for oil. “It opened up a lot of things,” says Chu. “It has gone in very different directions, and it’s really exploded, so it was a thrill to be a part of the birth of this.”