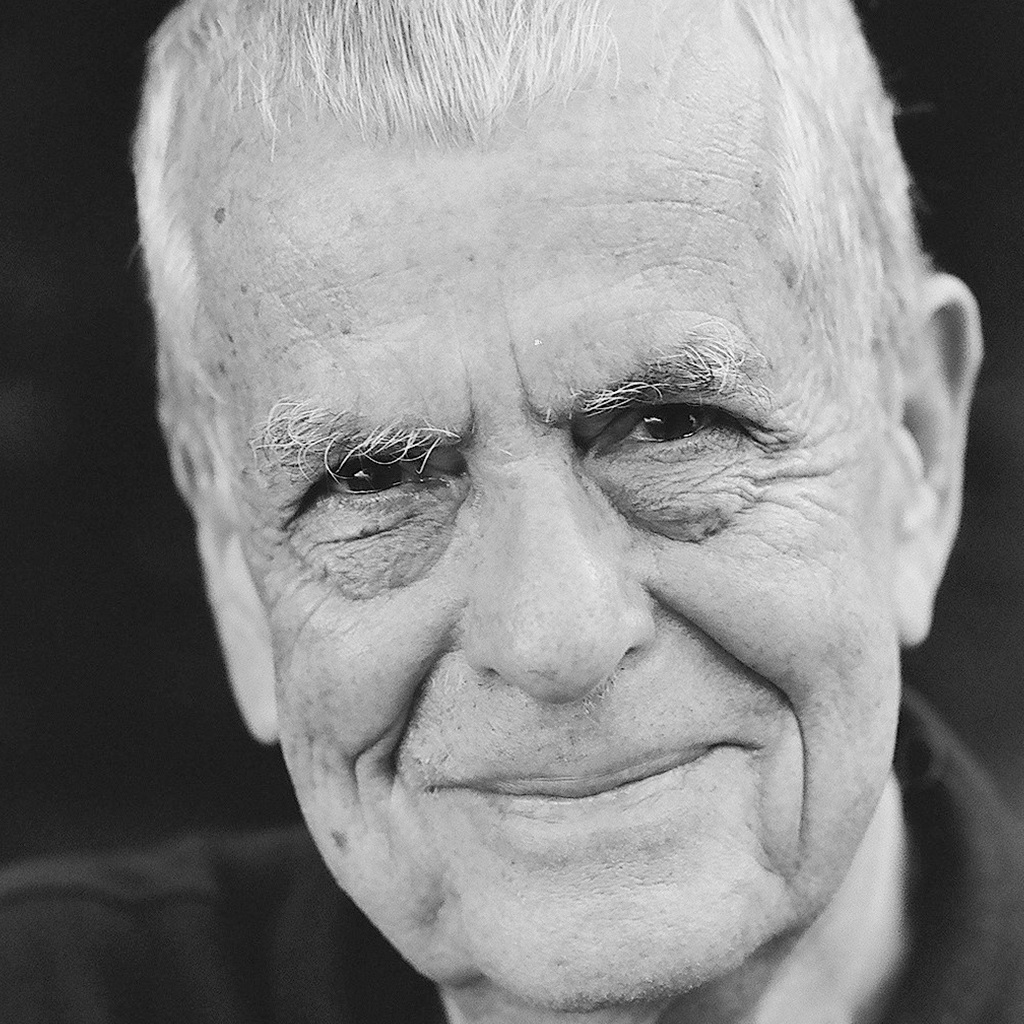 Aaron Ciechanover is a biochemist who, in 2004, shared the Nobel Prize in Chemistry with fellow Israeli Avram Hershko and Irwin Rose of the US ‘for the discovery of ubiquitin-mediated protein degradation’. Scientists already knew how most proteins are produced but what prevented cells from being overloaded by stockpiled proteins? In the early 1980s, Ciechanover, Hershko and Rose discovered how redundant proteins were broken down by a regulated system.

Ciechanover was born in 1947 in Haifa, in what was then the British Protectorate of Palestine (it be-came Israel the following year) and his Polish parents moved there in the 1920s with their families. Aaron and his elder brother Joseph were encouraged to study from an early age, and it was Joseph who bought Aaron his first microscope at the age of 11. Ciechanover majored in biology at school, and went on to receive his MSc in 1970 and his MD in 1975 from the Hadassah Medical School of the Hebrew University in Jerusalem. After three years of military service as a combat physician in the Israel Defense Forces, he joined Avram Hershko’s laboratory in the Faculty of Medicine at the Technion (Israel Institute of Technology) in Haifa in 1976, where he received his D.Sc. in 1981.

With two fellowships (from the Leukemia Society of America and the Israel Cancer Research Fund), Ciechanover went on to carry out postgraduate studies under the supervision of Harvey Lodish at MIT. Three years later, in 1984, he returned to Israel to join the faculty of medicine at the Technion where he continued his research with many students, fellows and physicians, and where he is currently a Distinguished Research Professor in the Center for Cancer and Vascular Biology in the Rappaport Faculty of Medicine and Research Institute. In 2000 he received the Albert Lasker Award for Basic Medical Research and in 2003 the Israel Prize for Biological Research. Among many esteemed institutions, he is a member of the Israeli Academy of Sciences and Humanities, the Pontifical Academy of Sciences of the Vatican and the USA National Academy of Sciences (Foreign Associate). He has been married to Menucha, a physician (geriatrician) and a graduate of Tel Aviv University School of Medicine since 1975. They have one son, Yitzhak – Isaac. Sadly, his parents did not live to see his success – Aaron’s mother died in 1958, and his father in 1964.

In the late 1970s and early 80s, Ciechanover, Hershko and Rose worked together and discovered that cells destroy redundant proteins in a phased process. A molecule called ubiquitin (“as it was thought to be ubiquitous – everywhere”) attaches to a target protein and accompanies it to a proteasome – a complex of enzymes that break the protein into shorter peptides that are then further degraded into amino acids, the basic components of which proteins consist. Only proteins carrying an ubiquitin molecule are admitted, and the ubiquitin detaches itself to be reused. Their work later made it possible to explain the cell control processes such as cell division, DNA repair, the mode of action of the immune system, and the way the cell maintains the quality of its proteins. Diseases, such as certain malignancies and neurodegenerative disorders, as well as inflammatory diseases, can result when protein degradation does not work properly, and knowledge of the process has already led to the development of a powerful anti-cancer drug, and others are in the pipeline. 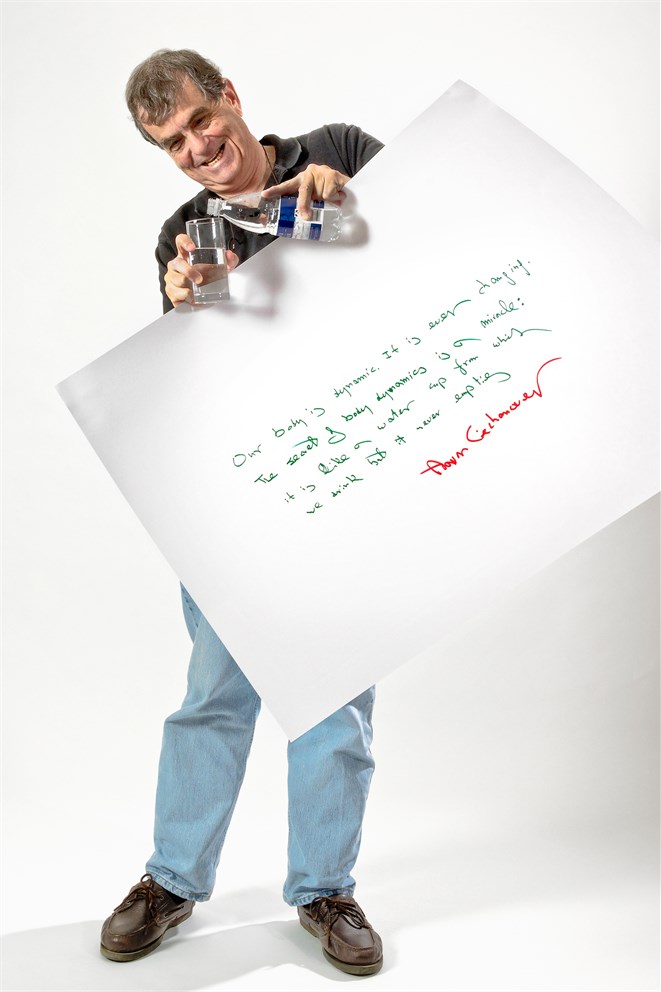 Ciechanover really invades my studio, bringing his family with him. Half of them are
permanently on their cell phones, speaking loudly in Hebrew. I tell him about my
project. He says “No, this wonʼt work! My work is so dynamic, it has to be on video, not
just still photographs!” Eventually, I talk him into doing a drawing – but we need a glass
of water, which is essential for his concept. So, what we see here is a Nobel Laureate
doing a performance!
This man is intense, but humorous, too. Just half an hour after this session, I receive an
e-mail request for the images – and an invitation to the Technion University in Israel.

Change with Stability
by Adam Smith

“Our body is dynamic. It is ever changing. The secret of body dynamics is a miracle: it is like a water cup from which we drink but it never empties.” The words on the page describe Aaron Ciechanover’s work, which is about the dynamic of the organism. Let it be a virus, a bacterium, a plant, a tree, a flower, a monkey, a donkey or a human being. We are all dynamic. We are all dynamic in the sense that each day, hour, minute, second we are all destroying our components and replacing them with new ones. So every moment, as you read these words, your proteins are being destroyed (the faulty ones, the non-functional ones), and replaced with new ones.

“Think about it,” says Ciechanover, “every day you, and me, Aaron Ciechanover, and everybody that surrounds us destroys about 4-8% of our proteins. Practically everything is made of proteins, and everyday we are losing 4-8% of them, which means that within a month or a month-and-a-half, every single molecule of protein that had been in your body has gone. You are a completely new person, but nevertheless you are the same.”

The system that Aaron Ciechanover, Avram Hershko and Irwin Rose discovered, a discovery for which they were jointly awarded the Nobel Prize, was this turning-over system. The portrait with the ‘picture’ and the written statement reflect the same idea. “I am standing with a glass of water,” Says Ciechanover, “pouring the water out – these are the destroyed proteins – but at the same time I refill the glass. Maybe it’s a complicated idea, but I had to present it in a very simple, metaphoric way, which is the glass and the water. And the writing basically tells the story in a very short way.”

Somehow, amidst all this change, we keep our individual characteristics, and even improve on them. While your proteins refresh themselves, your memories remain the same, or indeed develop. You may forget some things, but mostly you add more experiences. And its not just your memories, as Ciechanover points out; “My passion, my intelligence, my emotions, my loves, my hatreds, my everything has remained with me, except my own body. My body was gone and was replaced with a new one. That’s the beauty of the living organism. The ability to replace faulty parts online, all the time. Isn’t it magnificent?”