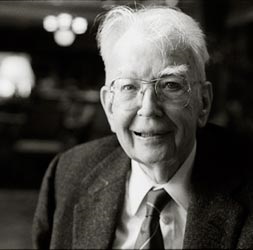 Economist Ronald Harry Coase admits he has little head for figures. Disdaining what he calls ‘blackboard economics’, his approach is more that of a philosopher. Two of his works, written 23 years apart, served to radically revise economic thinking.

Born at the end of 1910 in London, Ronald was an only child with academic interests. Weak legs caused him to attend a school for the handicapped but he gained a scholarship to go to Kilburn Grammar School. He intended to study history at university but had no Latin, so began a science course, but disliked maths, so he switched to the only other option, commerce, and went to the London School of Economics in 1929. Professor Arnold Plant inspired Coase with his views on competitive economic systems so much that, instead of studying industrial law in his final year, he took a travelling scholarship to the US.

Coase spent 1931–32 studying American industries. He formed the concept of transaction costs, and an explanation of why there are firms. These ideas were the basis for his article The Nature of the Firm, cited in his Nobel award. Back in Britain, he taught at Dundee from 1932–34, at Liverpool from 1934–35 and at the LSE from 1935, where he ran a course on public utilities. After working as a statistician during the war, he returned to the LSE and continued his research on utilities, publishing a book on British broadcasting in 1950. In 1951, Coase emigrated to the US, working at the University of Buffalo and in 1959 joined the University of Virginia. Between the two, he spent a year at the Center for Advanced Study in the Behavioral Sciences, studying the US broadcasting industry. He wrote an article which proposed a pricing system for transmission rights based on the highest bidder, and went on to discuss the property rights system.

Several prominent economists – including Aaron Director, George Stigler and Milton Friedman disagreed with Coase, but during an evening of informal debate he convinced them all. Stigler recalls: “In two hours the vote went from twenty against and one for Coase to twenty-one for Coase!” Coase himself remarks: “Had it not been for the fact that these economists thought that I had made an error in my article on The Federal Communications Commission, it is probable that The Problem of Social Cost (1961) would never have been written.” This latter article confounded accepted notions of economics and gave rise to the field called law and economics.
In 1964, Coase moved to the University of Chicago and edited the Journal of Law and Economics until 1982. He was the founding president of the International Society for New Institutional Economics (1996–97) and is the research advisor to the Ronald Coase Institute.