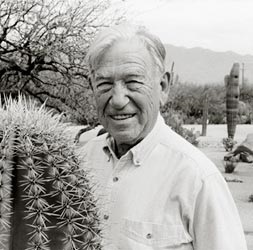 Stanley Cohen is an American biochemist who shared the 1986 Nobel Prize in Physiology or Medicine with Rita Levi-Montalcini for their work in the 1950s in which they discovered cell growth factors.

He was born in Brooklyn, New York, 1922, the son of Russian Jewish immigrants (his father was a tailor and his mother a housewife), and after school attended Brooklyn College, where he majored in both biology and chemistry, graduating in 1943. After working for a while as a bacteriologist in a milk processing plant to save enough money to continue his education, Cohen gained a fellowship to enter Oberlin College, where he gained an MA in Zoology in 1945, and then another to study biochemistry at the University of Michigan where he received a PhD in 1948. His thesis concerned the metabolism of earthworms, for which he collected over 5,000 worms from the campus green. For the next four years, Cohen worked in the pediatrics and biochemistry departments of the University of Colorado, working on the metabolism of premature infants, before gaining a fellowship from the American Cancer Society in 1952 to attend Washington University, St Louis, to gain experience of radioisotopes.

The following year he joined Rita Levi-Montalcini under Viktor Hamburger in the department of zoology to learn about embryology. Hamburger and Levi-Montalcini had discovered that a variety of mouse tumour spurred nerve growth when implanted into chick embryos, and traced the effect to a substance they named nerve-growth factor (NGF). Levi-Montalcini found that the tumour caused similar cell growth in a nerve-tissue culture kept alive in the laboratory. Cohen was able to isolate the NGF, which was the first of many cell-growth factors to be found in the bodies of animals. It plays an important role in the growth of nerve cells and fibres in the peripheral nervous system. Cohen also found another cell growth factor that caused the eyes of newborn mice to open and their teeth to erupt several days sooner than normal. Cohen termed this substance epidermal growth factor (EGF). He went on to purify it and completely analyse its chemistry, finding that EGF influences a variety of developmental events in the body.

In 1959, Cohen left Washington for Vanderbilt University School of Medicine in Nashville as an assistant professor in the biochemistry department where he continued to explore the chemistry and biology of EGF. In 1976 he was appointed an American Cancer Society Research Professor and in 1986 Distinguished Professor. He also received
National Medal of Science in 1986, among many other awards.