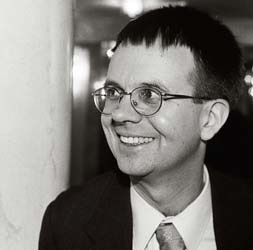 Eric Allin Cornell shared the 2001 physics prize with his colleague Carl Wieman and German Wolfgang Ketterle for the achievement of Bose-Einstein condensation (BEC).

In 1924 the Indian physicist Satyendra Nath Bose made statistical calculations regarding photons, particles of light. Albert Einstein then generalized the result to atomic particles and predicted that if a gas of atoms was cooled sufficiently the atoms would gather in the lowest possible energy state – similar to normal condensation. Seventy years later, in 1995, Wieman and Cornell succeeded in proving this theory experimentally, producing a BEC of 2,000 rubidium atoms at 20 nK (nanokelvin) i.e. 0.00000002 degrees above absolute zero. Later that year Ketterle performed similar experiments with sodium atoms.

Cornell, the eldest of three children, was born in Palo Alto, California in 1961 but two years later moved to Cam- bridge, Massachusetts, where his father taught at MIT. His mother, also a teacher, encouraged her children to read at an early age and Eric was voracious, even reading surreptitiously during class at school. The family moved to San Francisco so Eric spent his final year at Lowell High School, where a healthy attitude to learning was fostered and smoothed his transition to Stanford University. As well as physics, Cornell studied Mandarin Chinese and took a year out to teach English and tour Taiwan, Hong Kong and China, returning refreshed to graduate with honours and distinction in 1985 and progress to MIT. He gained his PhD in 1990 and, seeking knowledge of laser technology, joined Carl Wieman and student Chris Monroe for post-doctoral work at the Joint Institute for Laboratory Astrophysics in Boulder, Colorado.

One of Wieman’s experiments was a simple compact diode laser cooling device, which fascinated Cornell, and he immediately began to think of attempting a Bose-Einstein condensation (BEC), as people were already attempting at MIT. In 1992 Cornell joined the faculty of the University of Colorado, and became a senior scientist at the National Institute of Standards and Technology, the two organisations that ran JILA on the university campus. In June 1995, Wieman and Cornell used a combination of laser and magnetic techniques to slow, trap, and cool about 2,000 rubidium atoms to form a BEC.

Cornell has received several international awards and became a member of the National Academy of Scientists in 2000. In 1995, he married Celeste Landry, an old flame from Stanford. They have two daughters. In 2004, he contracted the flesh-eating disease necrotizing fasciitis and his left arm was amputated. He returned to work part-time in April 2005, dismissing his loss as “more an inconvenience than a catastrophe”.