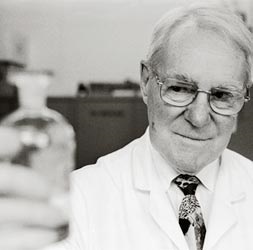 John Warcup Cornforth was awarded one of the two 1975 Nobel Prizes in Chemistry for his work on the stereochemistry of enzyme-catalysed reactions.

A carbon atom can form bonds with up to four other atoms or groups. If these are all different the central carbon is a chiral centre and the molecule can exist in two forms that are mirror images of each other. These can often be separated and the three-dimensioal structures (the stereochemistry) found by methods of physics. But enzymic reactions generally create only one of the two possible forms. This is useful for the living cell in which the enzyme operates, since life depends on almost exact replication, but does the enzyme still exert strict stereochemical control when the product would be the same whichever of several possible pathways is followed?

The enzymic synthesis of cholesterol offers many opportunities for testing this question, undertaken by Cornforth and collaborators.

Molecules of the starting material can be made chiral by using chemistry to introduce hydrogen isotopes (deuterium and/or tritium) at specific positions. Many new procedures had to be invented to make and analyse the labelled substances. In the end, it was found that the enzymes kept the process under strict stereochemical control even when absence of control would have led to the same product.

Cornforth was born in Sydney, Australia, in 1917, the second of four children. At the age of ten, he began to go deaf from otosclerosis, but he got through Sydney Boys’ High School before hearing loss became total. He entered Sydney University at the age of 16 and despite being unable to hear lectures he graduated in 1937 with the highest honours in organic chemistry. In 1939 he won an 1851 Exhibition scholarship to Oxford, UK, working under Robert Robinson. Only two such scholarships were awarded to Australia each year and the other went to Rita Harradence, also an organic chemist of Sydney. Such fates are not to be ignored and the couple married in 1941. They had three children, two grandchildren, and one great-grandchild. Their joint published work extends over 35 years.

After completing their theses on steroid synthesis, the pair joined the Oxford team working on penicillin, and Cornforth helped to write The Chemistry of Penicillin (1949). After the war he (and Rita, part-time) joined the scientific staff of the Medical Research Council in London. He completed the total synthesis of non-aromatic steroids in 1951, but he was already collaborating with George Popjak on the enzymic synthesis of cholesterol. In 1962 the duo (with Rita) left the MRC and became co-directors of the Milstead Laboratory of Chemical Enzymology. Here most of the stereochemical study mentioned above was executed. Rita did many of the delicate labelling procedures. Popjak left for UCLA in 1968 but Cornforth continued until 1975 when he became Royal Society Research Professor at the University of Sussex. Among many honours he values most the fellowship of the Royal Society of London (elected 1953).