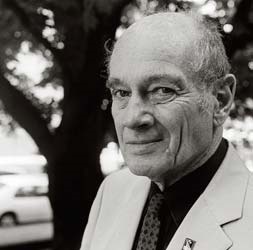 Particle physicist James Watson Cronin received the 1980 physics prize with Val Fitch for a 1964 experiment that implied that reversing the direction of time seems not to precisely reverse the course of certain reactions of subatomic particles. For those that think we are straying into the realm of science fiction, what Cronin and Fitch proved was that some subatomic reactions do not adhere to basic symmetry principles. By examining the decay of kaons they found that a reaction run in reverse does not merely retrace the path of the original reaction, which showed that the interactions of subatomic particles may not be indifferent to time. This phenomenon is known as CP violation. CP is the product of two symmetries: C for charge conjugation, which transforms a particle into its antiparticle, and P for parity, which creates the mirror image of a physical system. This symmetry is slightly violated during certain types of weak decay. Since one believes that the product CPT, where T stands for time reversal, is always conserved, CP violation can be interpreted as implying T violation, as described above.

The discovery was made at Brookhaven National Laboratory using the proton accelerator AGS to produce a beam of neutral elementary particles. Their radioactive decay in flight was recorded and measured. The type of neutral kaons (K-mesons) which Cronin and Fitch chose to study are remarkable since they can be regarded to consist of one half ordinary matter and the other half antimatter. The result showed for the first time that the left-right asymmetry (P ) is not always completely compensated by transforming from matter to antimatter (C ).

Cronin was born in Chicago in 1931 but grew up in Dallas, Texas, gaining a degree in physics and mathematics in 1951 from Southern Methodist University, where his father taught Greek and Latin. He progressed to the University of Chicago for his PhD, studying under the likes of Enrico Fermi, Maria Goeppert-Mayer and Murray Gell-Mann who stirred his interest in the new field of particle physics. In 1955 Cronin moved to the Brookhaven Cosmotron, where the long-lived K-meson was discovered. There he met Fitch, who invited him to Princeton University in 1958. At Princeton the duo studied K-meson decays, leading to the discovery of CP violation.
After a year in France, working at the Centre d’Études Nucleaires at Saclay, Cronin returned to Princeton in 1965 and began a series of experiments to study the neutral CP violating decay modes of the K-meson. In 1971 he returned to Chicago as professor of physics, and later as professor emeritus. He was a member of three major US scientific academies and the board of advisors of Scientists and Engineers for America, which promotes sound science in American government.

He was married to Annette Martin and they have a son and two daughters. His second wife was Carol.
James Cronin passed away on 25 August 2016, at the age of 84.