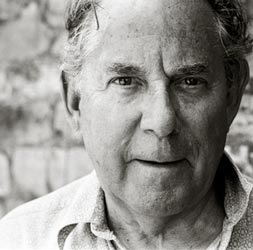 Paul Josef Crutzen is a Dutch chemist who received the 1995 chemistry prize for demonstrating, in 1970, that nitrogen oxide erodes the ozone layer, which protects the Earth from the sun’s ultraviolet radiation. He shared the prize with Mario J. Molina and F. Sherwood Rowland, who showed in 1974 that chlorofl uorocarbons (CFC) also destroy ozone. Between them, the three researchers may have saved the Earth from potential global disaster.

Crutzen was born in Amsterdam in 1933, and recalls attending school during the war years, especially the winter of famine in 1944–45, when several of his classmates died of hunger and disease. In 1946 he entered middle school, focusing on natural sciences, but admitting: “chemistry definitely was not one of my favourite subjects”, and went on to the Middelbare Technische School (MTS) to train as a civil engineer. His early career was at the Bridge Construction Bureau. In 1958 Crutzen married Finnish student Terttu Soininen and settled in Sweden. They have two daughters.

Longing for an academic career, Crutzen gained a job as a computer programmer at Stockholm University’s Department of Meteorology. He used his spare time to gain the equivalent of an MSc in mathematics, mathematical statistics, and meteorology and a PhD in meteorology. In 1965 he helped develop a numerical model of the oxygen allotrope distribution in the stratosphere, mesosphere and lower thermosphere. “This project got me interested in the photochemistry of atmospheric ozone”, he recalls.

While much of the work at Stockholm was aimed at acid rain, Crutzen says he was given free rein, and much help, in his ozone studies. He discovered that nitrous oxide (N2O), produced naturally by soil bacteria, rises into the stratosphere, where solar energy splits it into two reactive compounds, NO and NO2. These remain active for some time, breaking ozone (O3) down into molecular oxygen (O2). His research paved the way for the work of Molina, Rowland, and others, not least research into the effects of air traffi c releasing N2O into the atmosphere. Crutzen has worked at the European Space Research Organisation in Oxford, UK, the National Center for Atmospheric Research in Colorado, USA, and as director of the Atmospheric Chemistry Division, Max-Planck-Institute in Mainz, Germany. He was elected to academic societies in both Europe and the United States, including the Royal Swedish Academy of Sciences, the Royal Swedish Academy of Engineering and Academia Europaea. 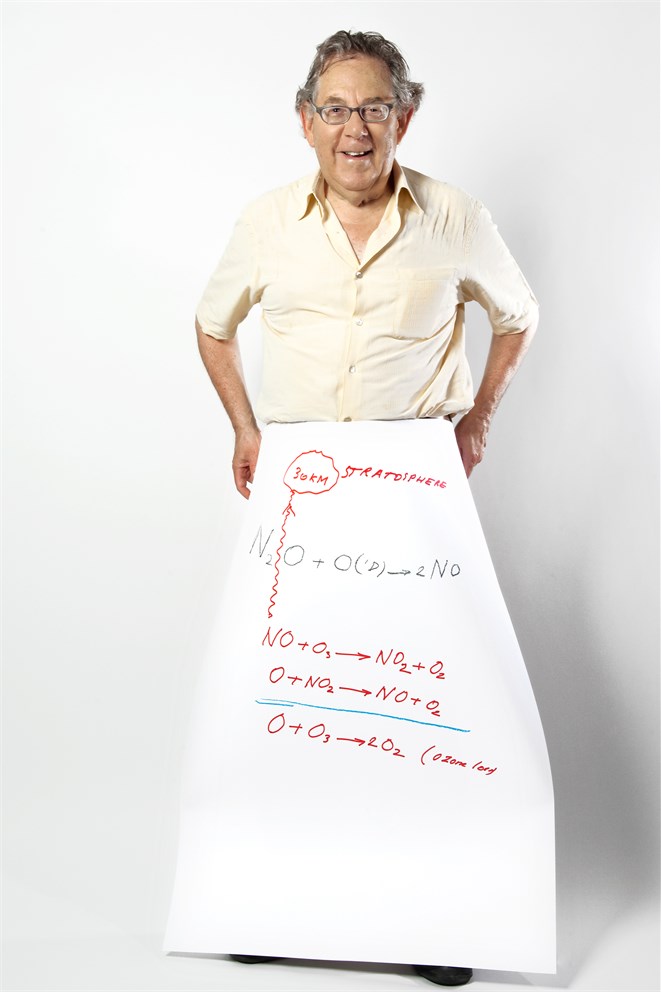 Crutzen comes into the studio and gazes around through his thick spectacles. He asks
me what he should do – then decides to do the drawing right away, before I have
a chance to take some close-ups. At first, he doesnʼt know what to draw. He starts
scribbling formulas. Since he studies the atmosphere, I ask him whether he has worked
with balloons. “Yes, balloons, cool!” He tries to draw a balloon, but fails, laughing. He
asks for a new sheet of paper, and scribbles a balloon. When he is done, he poses by
wrapping the picture around himself like a skirt.
I ask him what, in his view, was the most senseless invention of mankind.
He hesitates a moment and then says: the atomic bomb.

Between Earth and Sky

That distance, 30km, written in the bubble at the top of Paul Crutzen’s sketch, captures the essential and surprising discovery he made at the beginning of the 1970s. Crutzen demonstrated for the first time that microbiological transformations occurring in the soil were directly affecting the thickness of the ozone layer, up in the stratosphere, 30km above the earth.

Nitrous oxide, N2O, is produced in the soil by biological activity. As shown by the wavy red line in Cruzten’s drawing, this stable chemical species can travel all the way up to the stratosphere. Once there, under the action of sunlight, it decays to form the nitrogen oxides NO and NO2, as shown in the first two equations. These nitrogen oxides then themselves react with the stratospheric ozone (O3). They do so catalytically, meaning that while they deplete the amount of ozone, they themselves are unchanged by the reaction and each molecule of nitrogen oxide can therefore eliminate many molecules of ozone.

The production of nitrous oxide in the soil is increased by the use of nitrogenous fertilizers, and so by demonstrating the connection between nitrous oxide and ozone, Crutzen showed one route by which human activity on earth was damaging the ozone layer. Now we know many more pathways by which ozone in the stratosphere is controlled by biological processes, such as those involving the production of methane. But Crutzen’s warnings that overuse of fertilizers could be threatening our protective shield of ozone was among the first indications of the importance of paying heed to the earth’s biogeochemical cycles.

A few years later, in 1974, Mario Molina and Sherwood Rowland, who later became Crutzen’s co-Laureates, published their findings that chlorofluorocarbon (CFC) gases, used in many devices such as aerosols and refrigerators, were also depleting ozone levels. International measures to reduce CFC use and control damaging biological processes should be helping to repair the damage so far caused to the ozone layer, but since the chemical species involved survive a very long time in the stratosphere, the restorative measures will take time to have their effect. “We have to be patient,” says Crutzen, “but I would say in about 50 years, most of the ozone will have been regenerated.”