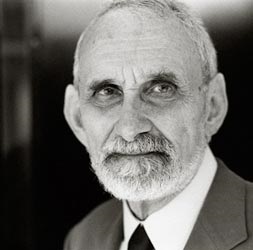 Dr. Curl is a graduate of Rice Institute, earning his B.A. in1954. He received his Ph.D. at the University of California, Berkeley, in 1957, and was a Research Fellow at Harvard University from 1957-1958. Dr. Curl's research focus is in physical chemistry, where his research activities have been in several fields, with the most consistent theme being high-resolution spectroscopy. He is most well known as one of the co-discoverers of the carbon cage compounds called the fullerenes.

He is a member of the National Academy of Sciences, European Academy of Arts and Sciences, Phi Beta Kappa, Phi Lambda Upsilon, and Sigma Xi. He is a Fellow of the American Academy of Arts and Sciences, a Fellow of the Optical Society of America, and Honorary Fellow of the Royal Society of New Zealand. He has been a NSF Predoctoral Fellow, a NATO Post-doctoral Fellow, and Alexander von Humboldt Senior Awardee. Jointly with Kenneth Pitzer, he received the Clayton Prize of the Institute of Mechanical Engineers in 1957. Jointly with Richard Smalley and Harold Kroto, he received the Nobel Prize in Chemistry in 1996, the American Physical Society International Prize for New Materials in 1992 and the American Carbon Society Medal for Achievement in Carbon Science in 1997. He shared the Texas Distinguished Chemist Award for 1997 with Rick Smalley. He received the Order of the Golden Plate from the American Academy of Achievement in 1997, the Johannes Marcus Marci Medal in Spectroscopy in 1998, the Madison Marshall Award in 1998, and the Space Act Award in 1998. He is a member of the Texas Science Hall of Fame. He is an Honorary Professor at the University of Science and Technology of China. He has honorary degrees (Doctor Honoris Causa) from the University of Buenos Aires (1997) and the Universite du Littoral (2002). He has been Visiting Research Officer at the National Research Council of Canada, and visiting scientist at the Mathematical Institute, Oxford University, the Institute for Molecular Science, Okazaki, Japan, at the National Institute for Standards and Technology in Boulder, at the University of Bonn, and at the University of Canterbury, Christchurch, New Zealand where he was an Erskine Fellow. 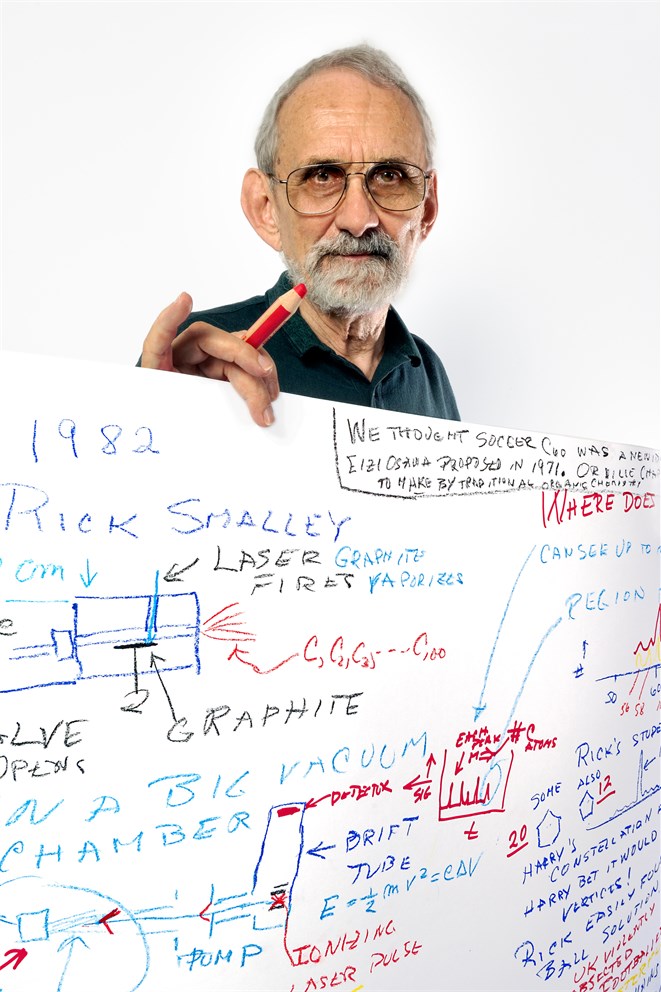 Curl is a quiet, private person. He starts his drawing right away, handing back the yellow crayon. “Nobody can see that!” Later he wants the yellow back and complains there is no green. “The first lasers,” he argues, “were green!” Curl starts at the top left corner of the paper and systematically fills every bit of space. He quotes his colleagues Kroto and Smalley. The C60 molecule they found should have been called “Soccerene”, but the British part of the group violently objected. They wanted “Footballene”. The group compromised, naming the new molecule “Buckminster Fullerene” (after the inventor of a similar geodesic dome structure). Curl keeps on drawing even after the first sheet is full, becoming the only Nobel Laureate, who has ever filled up a second piece of paper!

Most of the Laureates in the Sketches of Science exhibition followed Volker Steger’s instruction to draw their discovery, but here Robert Curl has gone a step further; he has drawn (and written) the story of the discovery. Looking through his sketch, it’s immediately obvious how much the names of Curl’s co-Laureates Rick Smalley and Harry Kroto figure. The viewer gets a flavour of the thrilling exchanges of ideas that went on between them during the brief period of just eleven days, in 1985, when the discovery took place.

The account starts in the upper-left hand corner and moves essentially in sequence, from top to bottom through the two columns, terminating at bottom right. The three Laureates had got together to investigate whether vaporised carbon atoms would form into chains. Analysing the results of these vaporisations in a mass spectrometer, which sorts out molecular species by size, they noticed an unexpected peak indicating an assemblage of 60 carbon atoms. “So we’d been mostly working or thinking about Harry’s carbon chains,” recalls Curl, “but the C60 insisted on coming to our attention. And so we had a meeting on Friday afternoon to say let’s pursue this question of if there is something special about C60.”

They then played with the conditions and by the weekend they had got to the point where the C60 mass spectrum peak was 30 times higher than its nearest neighbours (see the trace in red towards the top of the right hand column). “That was something that truly needed explanation,” remembers Curl.

Sorting out what C60 might look like absorbed much of the Monday. Could it be flat, like graphite? Or made of hexagons, like the homemade cardboard constellation finder that Kroto had back at home in England (as mentioned in the sketch). “We didn’t know what we had,” remembers Curl, “So we called the chair of the math department and described this object briefly and the guy said, “What you have there is a soccer ball.””

“Truly amazing,” says Curl, “out of the chaos of condensing carbon that you can get not just a little bit, but quite substantial amounts of these materials. It’s sort of like throwing a bunch of pieces of glass in the air and having them fall down and make a cup. So that’s the story.”