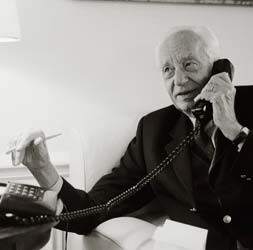 Jean-Baptiste-Gabriel-Joachim Dausset is a French haematologist and immunologist who shared the 1980 prize in physiology or medicine with Baruj Benacerraf and George Davis Snell “for their discoveries concerning genetically determined structures on the cell surface that regulate immunological reactions”.

He was born in Toulouse in 1916, after his father, a doctor in the French army, sent the family away for safety during the First World War. He attended the Lycée Michelet in Paris and obtained his baccalaureate in mathematics. His father, Henri Dausset, pioneered rheumatology in France, and Jean followed in his footsteps, attending medical school until the Second World War began in 1939. He joined the army but returned in 1940 to a Paris under German occupation. He briefly returned to his studies before leaving to join the Free French forces in North Africa, where he performed his first laboratory experiments on blood platelets.
In 1944, he returned to Paris to help with the blood transfusion service, and when the war ended returned to full-time research, gaining his degree from the University of Paris in 1945.

After training at Harvard and the Children’s Hospital in Boston, he returned to France, to pursue the new immuno- haematology techniques for red blood cells and adapted the techniques to white blood cells and platelets. In the 1950s Dausset studied the reduction in white blood cells (leukocytes) in recipients of numerous blood transfusions. He found that cell loss resulted from the action of antibodies that selectively attacked the foreign leukocytes. Dausset suspected that the attacks were stimulated by human leukocyte antigens (HLA) on the surface of foreign cells. These antigens form unique patterns and finding a close match increases the chances of success in tissue and organ transplants (a process, similar to blood typing, called tissue typing). In 1958, while head of the Immuno-haematology Laboratory at the National Blood Transfusion Centre, he described the first leucocyte antigen. Concerned about the state of French medical research, Dausset, with Robert Debré, persuaded the government to revise medical education and research by placing scientists in hospitals, leading to an increase in research, particularly in biology.

He helped found the Research Institute in Blood Diseases, and was assistant director there until 1968 when he took over as director of the Research Unit on Immunogenetics of Human Transplantation. In 1977, he became Chair of Experimental Medicine at the Collège de France but his research laboratory remained at Hôpital Saint-Louis. In 1963, he married Rose Mayoral from Madrid. They have two children. Apart from the Nobel Prize, Dausset has received numerous international prizes and is a member of several medical Academies.