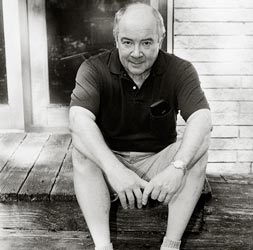 Johann Deisenhofer shared the 1988 Nobel Prize in chemistry with Hartmut Michel and Robert Huber for unravelling the three-dimensional structure of a membrane-bound protein complex active in photosynthesis. At the time the trio was working at the Max Planck Institute for Biochemistry in Martinsried near Munich.

Plants use the energy from light to build organic matter by a process called photosynthesis, creating the most basic foodstuff in the world’s food chain – vegetation. Furthermore, plants produce oxygen, which allows bodies to burn the organic matter during respiration. Photosynthesis, according to the official Nobel review of the 1988 chemistry award, is “the most important chemical reaction on earth”. The conversion of energy during photosynthesis and cellular respiration takes place through the transport of electrons via a series of proteins, which are bound in special membranes. These proteins are difficult to obtain in a crystalline form, but in 1981 Michel succeeded, allowing him, along with Deisenhofer and Huber, to study the structure. For the successful crystallization, Michel used a photosynthetic reaction centre from a bacterium that performs a simpler form of photosynthesis, which leads to the formation of organic material without liberation of oxygen.

Deisenhofer was born in Zusamaltheim, Bavaria, in 1943, and grew up on the family farm which, traditionally, he was to inherit, but he had no interest in farming. Instead, after his basic primary school education, he was sent to a series of schools, culminating at the Holbein Gymnasium in Augsburg. In 1965, after 18 months of military service, he entered the Technische Universität in Munich to study physics. Having concentrated on solid state physics, Deisenhofer switched to biophysics for his PhD, joining Robert Huber’s new group at the Max Planck Institute in 1971, initially located in Munich but then moved to Martinsried in 1972.

Deisenhofer first worked with Wolfgang Steigemann on the crystallographic refinement of bovine pancreatic trypsin inhibitor, and wrote a popular paper in 1975. He obtained his PhD in 1974 and Huber offered him a postdoctoral position, which became permanent in 1976. In 1982, Hartmut Michel reported his success with the crystallisation of the photosynthetic reaction centre from Rhodopseudomonas viridis, and Deisenhofer joined the project to determine the three-dimensional structure of this molecule. Their success brought a flurry of job offers. In March 1988 Deisenhofer accepted a position as professor of biochemistry (biophysics since 2012) at the University of Texas Southwestern Medical Center in Dallas, and as Investigator at the Howard Hughes Medical Institute (1988-2010). Since February 2019 he is professor emeritus at UT Southwestern.
Deisenhofer is a Member of the National Academy of Sciences of the USA, the Academia Europaea, the German Academy of Natural Scientists Leopoldina, and the Academy of Medicine, Engineering, and Science of Texas.

At the University of Texas Southwestern Medical Center he met Kirsten Fischer Lindahl, whom he married in 1989. 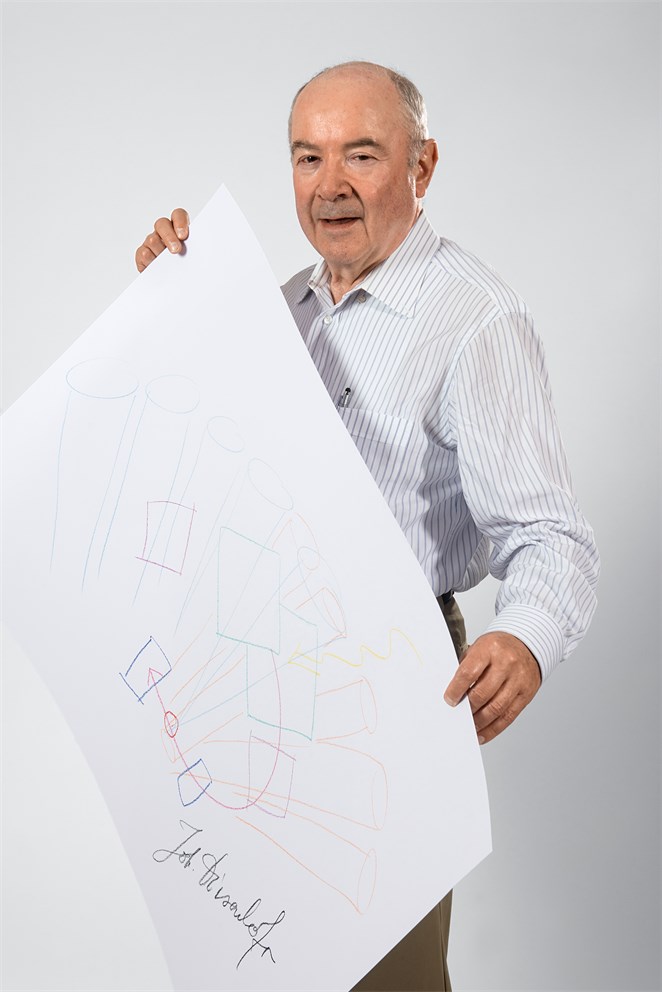 Johann Deisenhofer with his "Sketch of Science"

When I see Deisenhofer I imagine him looking through a stack of plexi-glass sheets with very fine x-ray-diffraction patterns on it. In his mind, he translated these fine lines into the three-dimensional shape of the biomolecule that captures the energy of the sun. And the year this happened was sunny, indeed: He fell in love, won a Nobel and moved to sunny Texas.

One interesting aspect of Volker Steger’s Sketches of Science series is that it sometimes allows us to compare different Laureates’ depictions of the same piece of work, giving us an insight into the various ways people use drawing to illustrate their thinking. Such is the case for the discovery awarded the 1988 Nobel Prize in Physiology or Medicine; the elucidation of the structure of the bacterial photosynthetic reaction centre, the molecular assembly that captures the energy of sunlight for use in biology. Hans Deisenhofer, Hartmut Michel and Robert Huber shared that Nobel Prize, having worked together on the experiments, and have all contributed to Volker’s project. Glancing over the three drawings shows how the three co-Laureates have sketched their discovery differently, giving alternative views of one and the same structure.

Deisenhofer’s dynamic representation focuses on showing the functional core of the reaction centre, which he and his colleagues revealed through the technique of X-ray crystallography. This is where photons from the sun, shown by the wavy line coming down from above, are converted to an electric current. The photon first excites one of the chlorophylls, drawn as overlapping squares. In this excited state the chlorophyll is able to pass an electron, as shown by the curving red line, through the membrane. Travelling first to one of the two pheophytins (the purple squares) and then through one of the quinones (blue squares), the electron then passes via an iron atom (red circle) to the other quinone, it’s final destination.

All these molecular elements are held in place by proteins that embed the reaction centre in a membrane. Deisenhofer has depicted just the membrane-spanning parts of these proteins, drawing the helical protein chains that loop through the membrane as cylinders of two colours, representing the two different protein subunits involved. Looking closely, one can see that he has accurately drawn the chlorophylls themselves as planar molecules, orientated perpendicular to the plane of the membrane.

Given the attractiveness of the sketch, one might assume Deisenhofer draws often. “No, very seldom,” he says. “But I have given by now, probably, about 200 talks about this, so I’m used to talking about it. So it’s not very surprising that I can, out of my head, draw such a thing.”