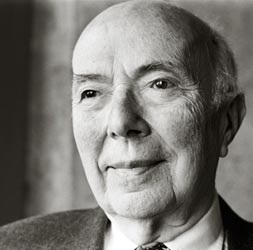 Dr. Renato Dulbecco, now President Emeritus, served as President of the Salk Institute from 1988-1993. He is a Distinguished Research Professor and his current research concerns the origins and progression of breast cancer.

Early in his career, Dr. Dulbecco concentrated on the study of viruses that cause disease, and developed the method, used universally since then, to assess their activity. He gave special attention to viruses that cause tumors in animals, and developed what is now a widely used technique to study their effects using cells grown in laboratory containers. These contributions are fundamental to understanding the uncontrolled growth of cells that occurs in cancer.

Best known of Dr. Dulbecco’s discoveries is that tumor viruses cause cancer by inserting their own genes into the chromosomes of infected cells. This finding was one of the first clues to the genetic nature of cancer and led to Dr. Dulbecco being awarded the Nobel Prize for Physiology or Medicine in 1975.

Subsequently Dr. Dulbecco turned to a study of the origins and progression of tumors of the breast. He used monoclonal antibodies, tools of molecular biology that can identify cells by their chemical signatures, to characterize the tumor cells. Currently he studies the genes that are important in the normal development of the breast and in the tumors that arise in it.

In 1986 he launched the idea of studying all human genes, starting the world-wide Genome Project. Dr. Dulbecco’s birthplace was Catanzaro, Italy, and he received an M.D. from the University of Turin. His first academic appointment was at the California Institute of Technology where he became a Professor before joining The Salk Institute as one of the Founding Fellows in 1963. He spent the years 1972 to 1977 at the Imperial Cancer Research Fund in London where he served as Deputy Director of Research. In 1977 he returned to The Salk Institute as Distinguished Research Professor. In addition to receiving a Nobel Prize, Dr. Dulbecco has received many other honors, including the Lasker Award and membership in the National Academy of Sciences, the Royal Society of London and the Academia dei Lincei of Italy.

Renato Dulbecco shared the 1975 prize in physiology or medicine with David Baltimore and Howard Temin (1934–1994) “for their discoveries concerning the interaction between tumour viruses and the genetic material of the cell”. In the 1950s it was found that viruses could cause leukaemia and other tumours not just in chickens, as ‘Rous virus’ had already shown, but in mammals too. Renato Dulbecco studied the effect of a simple DNA tumour virus on cultivated cells. He found that virus replication either led to a destruction of cells and the release of new virus particles, or a transformation of cells. Transformed cells produced no new virus particles. Dulbecco and coworkers used molecular biology techniques to show that the genetic material of the virus was built into the genetic material of the trans- formed cells. Dulbecco’s study gave a better understanding of the way cancer-causing oncoviruses work, and therefore a better understanding of how to fight cancer.

Dulbecco was born in Catanzaro, Southern Italy, in 1914. He graduated from high school at 16, and entered the University of Turin. Although talented in mathematics and physics, he decided to emulate his surgeon uncle and study medicine. At the young age of 22, he graduated with an MD in morbid anatomy and pathology under Giuseppe Levi. After two years’ military service Dulbecco returned to pathology in 1938, but was recalled to the army in 1940, serving in France and Russia before being wounded and sent home. When Mussolini’s government collapsed Dulbecco hid from the occupying Germans and joined the Resistance. After the war he became a councillor in Turin, but soon returned to academia to study physics.

In 1947, urged by colleague Rita Levi-Montalcini, he joined former classmate Salvador Luria in Bloomington, Indiana, and in 1949 he was invited to join Max Delbrück at Caltech. There he worked on animal viruses, including polio, and worked his way up to professor. In the late 1950s he took Howard Temin as a student, who worked on the Rous Sarcoma Virus with Harry Rubin. Their work sparked Dulbecco’s interest in the tumor virus fields. In 1962 Dulbecco moved to the Salk Institute and then in 1972 to The Imperial Cancer Research Fund (now Cancer Research UK) in London. In 1986 he was among the scientists who launched the Human Genome Project. In 1993 he moved back to Italy, as president of the Institute of Biomedical Technologies at the National Council of Research in Milan. In 2006 he retired to La Jolla, California as president emeritus of the Salk Institute. Dulbecco was married to Giuseppina Salvo from 1939–62, with whom he has a son and daughter, and since 1962 to Maureen Muir, with whom he has a daughter.