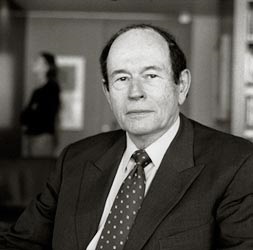 Prof. Edelman has attended the Lindau Meeting in 1975, 1984, 1990 and 1993. Due to the rotation of disciplines the Laureates will be invited every three years. The 2nd interdisciplinary Meeting was held in 2005.


Dr. Edelman is Director of The Neurosciences Institute and President of Neurosciences Research Foundation, the publicly supported not-for-profit organization that is the Institute’s parent. Separately, he is Professor at The Scripps Research Institute and Chairman of the Department of Neurobiology at that institution. Dr. Edelman has made significant research contributions in biophysics, protein chemistry, immunology, cell biology, and neurobiology. His early studies on the structure and diversity of antibodies led to the Nobel Prize for Physiology or Medicine in 1972. He then began research into the mechanisms involved in the regulation of primary cellular processes, particularly the control of cell growth and the development of multicellular organisms. He has focused on cell-cell interactions in early embryonic development and in the formation and function of the nervous system.

These studies led to the discovery of cell adhesion molecules (CAMs), which have been found to guide the fundamental processes by which an animal achieves its shape and form, and by which nervous systems are built. One of the most significant insights provided by this work is that the precursor gene for the neural cell adhesion molecule gave rise in evolution to the entire molecular system of adaptive immunity. Most recently, he and his colleagues have been studying the fundamental cellular processes of transcription and translation in eukaryotic cells. They have developed a method to construct synthetic promoters and have also been able to enhance translation efficiency by constructing internal ribosomal entry sites of a modular composition. These findings have rich implications for the fields of genomics and proteomics.

His book published with Giulio Tononi, entitled A Universe of Consciousness: How Matter Becomes Imagination, presents exciting new data on the neural correlates of conscious experience. In his latest book, published this year, entitled Wider than the Sky: The Phenomenal Gift of Consciousness, Dr. Edelman offers a model of the biology of consciousness. Dr. Edelman was born in New York City in 1929. He earned his B.S. degree at Ursinus College and an M.D. at the University of Pennsylvania. He spent a year at the Johnson Foundation of Medical Physics, and after a medical house officership at the Massachusetts General Hospital, he served as a captain in the Army Medical Corps. In 1960 he earned his Ph.D. at The Rockefeller Institute (now University). In addition to the Nobel Prize, Dr. Edelman has been the recipient of numerous awards and honors, including many honorary degrees. He is a member of the National Academy of Sciences, the American Philosophical Society, and several foreign societies, including the Academy of Sciences, Institute of France. He is author of over 500 research publications.

Gerald Maurice Edelman is an American medical doctor and biochemist who received the Nobel Prize in Physiology or Medicine in 1972 (shared with Rodney Porter of Oxford University, UK) for his work on the immune system, specifically the description of the structure of antibody molecules.

Edelman was born in 1929 in New York City, where he attended school before going on to Ursinus College in Pennsylvania, where he received a BSc, magna cum laude, in 1950. He then attended the University of Pennsylvania Medical School, where he received his MD in 1954, and became a medical house officer at the Massachusetts General Hospital. After two years as a captain in the US Army Medical Corps, in 1957 he joined the Rockefeller Institute as a graduate fellow, receiving his PhD in 1960, and staying on as assistant/ associate professor and assistant/associate dean of graduate studies. In 1966 he became professor at the Rockefeller University, a position he held until 1992. Since then he is professor of neurobiology at the Scripps Research Institute.

In 1969, Edelman and his research team succeeded in constructing a precise model of an entire antibody molecule, a four-chain structure comprising more than 1,300 amino acids. They then identified the precise locations where antigenic binding occurs. In 1981, Edelman founded The Neurosciences Institute at the Rockefeller University. As director of the institute he formulated a theory to explain the development and organisation of higher brain functions, published in the book “Neural Darwinism: The Theory of Neuronal Group Selection” (1987). Edelman argued that neural systems change and evolve to adapt to new experiences and knowledge. In 1993 the Institute moved to California.

Edelman has made significant research contributions in biophysics, protein chemistry, immunology, cell biology, and neurobiology. He is a member of the National Academy of Sciences, the American Academy of Arts and Sciences, the American Society of Biological Chemists and the American Association of Immunologists, as well as a number of other scientific societies, and has received many awards. In 1950, he married Maxine Morrison. They have two sons and a daughter.