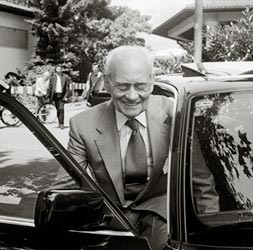 Manfred Eigen was born in Bochum on May 9th 1927, the son of the chamber musician Ernst Eigen and his wife Hedwig. He was an excellent pianist and gave the soloist in concert occasionally. In autumn 1945 he entered the Georg-August-University of Göttingen, studying physics and chemistry. He obtained his doctorate in natural science in 1951. After graduating, Eigen worked at the University’s Institute of Physical Chemistry until 1953, when he joined the Max Planck Institute. It was there that he engaged in the study of relaxation methods that made him world famous. Declining attractive offers by American, Swiss and German Universities he remained faithful to Göttingen. In 1964, he became director of the Department of Chemical Kinetics at the Max Planck Institute for Physical Chemistry.

Eigen started his investigations on fast chemical reactions in solution and over the next decade developed a series of new measuring techniques, which he called “relaxation spectrometry”. First he focused on measuring proton reactions: He and De Maeyer were the first to determine the neutralization rate (in the time range of nanoseconds) and to study the kinetic behaviour of protons in ice. The development of the theory of multi stage relaxation processes was followed by studies on metal complexes, in which the fast reactions of a large number of metal ions were investigated. The emphasis shifted towards biophysical-organic chemistry and biochemical problems, ranging from hydrogen bridges and replication kinetics in nucleic acids, through enzymatic processes and to their regulation and control.

For this work, using relaxation methods, he was awarded in 1967 with the Nobel Prize in Chemistry, together with his British colleagues Ronald Norrish and George Porter. The award was cited as “for their studies of extremely fast chemical reactions, effected by disturbing the equilibrium by means of very short pulses of energy”.

Since the late-1960ies, Eigen focused on mechanisms of biochemical reaction, which eventually led him to develop a theory of “Molecular Selforganization of Matter and the Evolution of Biological Macromolecules” (published in Naturwissenschaften 1971). A new purely physical model for the origin of life, according to which life began through selforganization and selective buildup of information stored in macromolecular sequences. According to Eigen, nucleic acids cannot have been the “only starters” due to their poor catalytic capabilities. Proteins, on the other hand, while having excellent catalytic capabilities, cannot form and process molecular information. Viability is only achieved through a combination of nucleic acids and proteins. During the last forty years, Manfred Eigen concentrated on the technological utilization of these ideas creating a new biotechnology, which he called “evolutionary biotechnology”. Today this method is established as directed evolution.

From the early nineteen sixties on, Eigen received numerous prizes. He is a member or Foreign Associate of various Academies of Sciences and was awarded doctorate degrees honoris causa from about fifteen foreign Universities. Manfred Eigen is ranked as one of the leading renowned scientists for his theoretical work on biological evolution and on the origin of information.