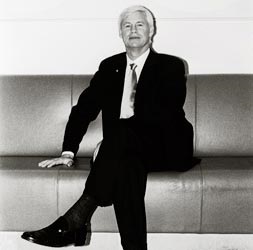 Prof. Engle has attended the Lindau Meeting in 2006. The Meetings in Economic Sciences are held every 2 years since 2004.


Born in Syracuse, NY in 1942, Robert Engle grew up in suburban Philadelphia, was in the second graduating class at Penncrest High School and went to Williams College to study Physics. His 1964 degree with Highest Honors in Physics little forecast his future career developments. While a first year PhD. student in low temperature physics at Cornell, he visited Alfred Kahn to discuss the possibility of becoming an economist. Fortuitously, Kahn had a fellowship available and before Engle left the appointment he agreed to switch immediately into economics. With a MS in physics in hand, he applied himself to learning economics. The problems were easy but the ideas behind the questions were hard. Time Series Econometrics was his research topic and this has lasted a lifetime.

His first job was at M.I.T. which was both exhilarating and challenging. In 1975 Engle accepted a tenured job at the University of California, San Diego. Officially, he was going to teach Urban Economics, but time series and Clive Granger were the real motivation. He and Granger received an NSF grant to study how to use disaggregated data to forecast aggregate series. His first student was Mark Watson with whom he worked on Kalman filtering solutions to this problem and time varying parameter problems.

He spent his first sabbatical at the London School of Economics in 1979 with David Hendry, Dennis Sargan, Jim Durbin, Ken Wallis, Grayham Mizon, Andrew Harvey and so many other terrific econometricians either in residence or close by. He began looking for an econometric procedure to assess Friedman's conjecture that business cycles were caused by the time varying uncertainty of inflation. Granger had developed a test for bilinear models that was based on the autocorrelation of squared residuals.

This was often significant but Engle didn't think bilinearity was the primary explanation for its significance. Finally the Kalman filter gave a clear picture of stochastic processes arising from conditional distributions. These ideas combined to produce the ARCH (Autoregressive Conditional Heteroskedasticity) model. He presented it at LSE and the European Meetings in Athens and the idea was launched.

The ARCH model recognized that the volatility of many economic time series might be slowly varying over time so that an autoregressive structure could be used to model and forecast volatility. By treating the variance not as a parameter but as a stochastic process, an entire class of models was developed. Estimates of future values of variance conditional on present information proved very useful in financial applications. It was possible to forecast risk, design improved portfolios and price options based on these forecasts.

Back in San Diego his students were all now interested in ARCH models. Dennis Kraft worked on the first multivariate models and Tim Bollerslev introduced two major innovations, the GARCH model and the student-t model. Russ Robins, David Lilien and Engle began the first applications to finance with the ARCH-M model. Next came a CAPM model with Tim and Jeff Wooldridge. Engle and Jeff Russell developed the ACD model to analyze tick-by-tick microstructure data. Clive developed the concept of cointegration and he and Engle worked out the econometrics. Hendry and J.F. Richard teamed up with Engle to write on Exogeneity; Engle and Sharon Kozicki introduced Common Features.

Engle published the DCC model for multivariate ARCH and the CAViaR model for conditional quantiles. UCSD was an exciting place where lots of people came to talk, learn and enjoy time series econometrics. In 2000 Engle took a job in the Finance Department of the Stern School of Business at NYU. His transition into Finance made New York and New York University very stimulating places to be. Teaching MBA's, consulting for investment banks, running a Center for Financial Econometrics, and now speaking to such wide-ranging audiences, have made these last few years extraordinarily interesting.

The Nobel prize has enhanced both his research and teaching. He now teaches “Volatility” for MBA’s and lectures around the world on topics of widespread interest. Econometrics embodies the scientific method of physics. We take measurements of the economy, test the validity of theories about its functions, and then, construct new theories to explain what is not well understood. This is fun!

Robert Engle shared the 2003 economics prize with Clive Granger (UK /Australia) for their independent work on time series (chronological observations of trends in markets and economies). While Granger devised cointegration methods for analysing economic time series with common trends, Engle considered time series with time-varying volatility. Random fluctuations in financial markets can have a significant effect on shares and other items involving risk.

These fluctuations can vary considerably but researchers traditionally presupposed a constant degree of volatility. Engle’s ARCH (autoregressive conditional heteroskedasticity), accurately captured the properties of many time series and developed methods for statistical modelling of time varying volatility. His ARCH models are vital tools not only for researchers, but also for analysts on financial markets, who use them in asset pricing and in evaluating portfolio risk. Engle was born in Syracuse, NY, in 1942. His childhood suggested a future in science – his father worked at Du Pont and helped him build rockets, and the young Robert also enjoyed making things in the workshop and in school sci- ence projects. He was an active and musical child, playing tuba, double bass and cello at Penncrest High School. He graduated valedictorian in 1960 and entered Williams College, majoring in physics and mathematics (and joining the All American Team as a lacrosse goalie. In later life he became a competition- level figure skater). Introductory economics was a mere additional course – and he almost studied religion instead.

He gained his PhD in economics in 1969, becoming more focused on time series econometrics, based on Clive Granger’s earlier work. That August he wed fellow student Marianne Eger (they have two children) and left Cornell for a faculty position at MIT. There he developed the theory for Band Spectrum Regression, helped with work on urban economics for the Boston Redevelopment Authority and struck up a close working friendship with Granger at the London School of Economics. It was through Granger that Engle gained a post at UC San Diego. There he and Granger worked closely on time series econometrics and gained some renown for UCSD in the field. It was during a sabbatical year at LSE in 1979, however, that Engle produced a model based on Milton Friedman’s conjecture that inflation uncertainty was a central cause of business cycles. It was this that grew into ARCH. In September 2000, he moved to New York University, eventually retiring from UCSD in 2003.