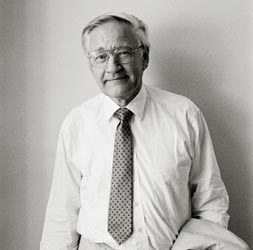 Richard Robert Ernst is a Swiss researcher and teacher who received the 1991 Nobel Prize in Chemistry for his contributions to the development of highresolution nuclear magnetic resonance (NMR) spectroscopy. Ernst’s refinements made NMR a vital tool in chemistry and other areas of science, including medical examination.

Ernst was born in 1933 in Winterthur, Switzerland, an industrial town but with strong artistic pretensions. The young Richard was attracted by both, playing cello in music ensembles and practicing chemistry – often with alarming results – with a set left behind by a deceased uncle, an engineer. He gained a BA in chemistry at the Federal Institute of Technology (ETH Zürich) in Zurich in 1957 and – after a break for military service – a PhD in physical chemistry in 1962. For his PhD, Ernst worked with high resolution nuclear magnetic resonance (NMR), designing and building improved NMR spectrometers. On leaving university, Ernst decided to apply for industrial work in the US, and from 1963–68 worked as a research chemist for Varian Associates in Palo Alto, California, who were also carrying out NMR research. “Indeed, I was extremely lucky,” he recalls. “Weston Anderson was on his way to invent Fourier transform spectroscopy in order to improve the sensitivity of NMR by parallel data acquisition.” Indeed, Ernst says, it was Anderson who in 1964 inspired Ernst to try using short, intense pulses of radio waves, rather than the slow, sweeping radio waves traditionally used in NMR spectroscopy. This dramatically improved the sensitivity of the device, allowing analysis of a greater range of nuclei types and smaller amounts of materials, and led to Fourier transform (FT) NMR as we know it today. The first successful experiments were done in summer 1964 while Anderson was away.

Strangely, the response to the discovery was muted, and although Varian took out a patent on the process they did not show much interest in the device until Tony Keller and his colleagues at the rival fi rm of Bruker Analytische Messtechnik produced a first commercial FT NMR spectrometer in 1969. By that time, Ernst had returned to Switzerland (in 1968) to teach at the ETH. He was made assistant professor in 1970 and full professor in 1976. He headed a research group in NMR, where he made further advances, including the use of stochastic resonance as an alternative to pulse FT spectroscopy – he had already used stochastic resonance at Varian to decouple and improve carbon-13 spectra. In 1971, Belgian scientist Jean Jeener proposed using a two-pulse radio sequence to produce a two-dimensional spectrum. Ernst’s group took up the challenge and performed the first experiments using the technique in 1974, leading to a scheme of determining the three-dimensional structure of chemical and biochemical compounds and is used today also to study the rates of chemical reactions.

Ernst 1974 expanded the 2D spectroscopy principle to medical NMR imaging, leading to the invention of Fourier zeugmatography which is the basis of numerous imaging techniques used today in clinical medicine. Ernst is married to Magdalena Kielholz. They have two daughters and a son. 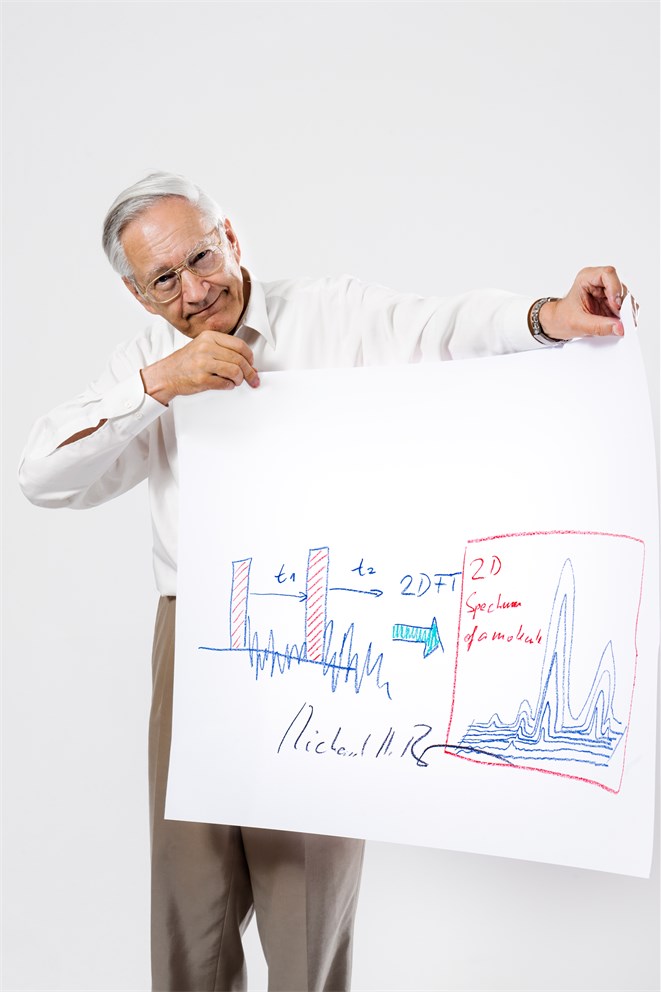 Look at this sketch: Magnetic resonance pulse 1 is followed by pulse
2, a bit of math is applied and we get a 2-D spectrum of a molecule.
So, the two pulses together contain information
that we can only read if we combine them –
the location of atoms in complex molecules.
... and Richard Ernst is not only a chemist but also a
renowned collector of Tibetan art!

Scanning the Location
by Adam Smith

Richard Ernst was awarded his Nobel Prize for his contributions to the development of nuclear magnetic resonance (NMR), which is nowadays used to probe the structure of all manner of things, from atoms in laboratories to people in hospitals. What he has sketched here are the basic principles underlying a method he invented called two-dimensional, Fourier Transform NMR, or “2DFT NMR” for short.

NMR works because atomic nuclei in a magnetic field absorb and re-emit electromagnetic radiation at a specific resonance frequency, which depends on their surroundings. Measuring those resonance frequencies therefore lets you probe the surroundings of the nuclei, building up a picture of the environment of the atoms. The experiment shown here starts with a radio-frequency pulse, shown by the hatched red bars. If you are studying a substance with many atoms (many nuclei), that will give you a whole set of superimposed resonance frequencies, which you can then disentangle by Fourier Transformation. “It’s like music,” says Ernst. “It’s music which you analyse for the different instruments. Your ear is doing, so to say, this frequency analysis by itself. So in one-dimensional Fourier transform NMR you essentially just replace an ear by a mathematical method.”

In 2D NMR it gets a bit more tricky. There, as seen in Ernst’s diagram, you use two radio-frequency pulses separated by an interval, t1, after which you wait for a second interval, t2. Putting together many such scans with varying durations for t1, and then subjecting the results to mathematical (Fourier) transformation, converts these time variables into frequency variables, which are then represented in a 2D spectrum like the one on the right hand side of the picture. This is a plot of frequencies, and that, with the application of further mathematics, can give you a positional map showing the locations of the atoms in the structure under study.

“I think drawings, especially of this type, of which you have one in front of you, are very important to enhance understanding of physics or chemistry,” says Ernst. “I’m sure they were also important, for example, for Einstein before he was sitting down to develop a complicated theory. I always do that. Guiding my mind in the proper direction, I make drawings of different types for the same subject until I find one which really fits.”