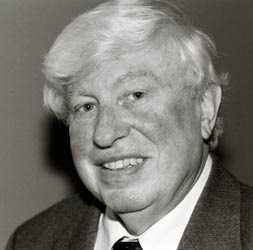 German physicist Gerhard Ertl received the 2007 Nobel Prize in Chemistry for his studies of surface chemistry – the fundamental molecular processes at the gas-solid interface.

Surface chemistry is not a new science but gained importance in the 1960s as an offshoot of the semiconductor industry. It also explains such varied processes as why iron rusts, how fuel cells function, how artificial fertilisers are made and how catalytic converters in our cars work. When a gas or liquid molecule hits a solid surface the molecule may simply bounce back or be adsorbed. It can split into its constituent atoms, react with previously adsorbed molecules or even react directly with surface atoms. Surface chemistry can even contribute to the understanding of the destruction of the ozone layer, as crucial reactions take place on the surface of ice crystals in the stratosphere.

Ertl explored new techniques, under sterile conditions and using new technology such as tunnelling microscopes to provide a complete picture of a surface reaction. He first determined the molecular mechanism of the Haber-Bosch process, in which iron is used to transform nitrogen from the air together with hydrogen to ammonia, which is e.g. the key compound for the production of artificial fertilisers. He went on to study the oxidation of carbon monoxide over palladium and platinum (catalytic converter) and discovered the phenomenon of oscillating changes in surface structure that occur during reaction.

Ertl stayed on at Munich as an assistant and lecturer until 1968, when he took a post as professor and director at the Technical University of Hanover. In 1973 he returned to Munich as a professor of physical chemistry at Ludwig Maximilian University. In 1986 he became professor at Berlin’s Free University and at the Technical University. He was director at the Fritz Haber Institute of the Max-Planck-Gesellschaft from 1986 until his retirement in 2004, adding a professorship at the Humboldt University of Berlin in 1996. During the 1970s and 1980s, he was also a visiting professor in California at Caltech and Berkeley and in Wisconsin-Milwaukee. He received the Japan Prize in 1992 and shared the Wolf Prize in 1998 with Gabor Somorjai of California, Berkeley. The Nobel Prize was announced on Ertl’s 71st birthday. He and his wife Barbara have two children, several grandchildren, a piano and some cats. 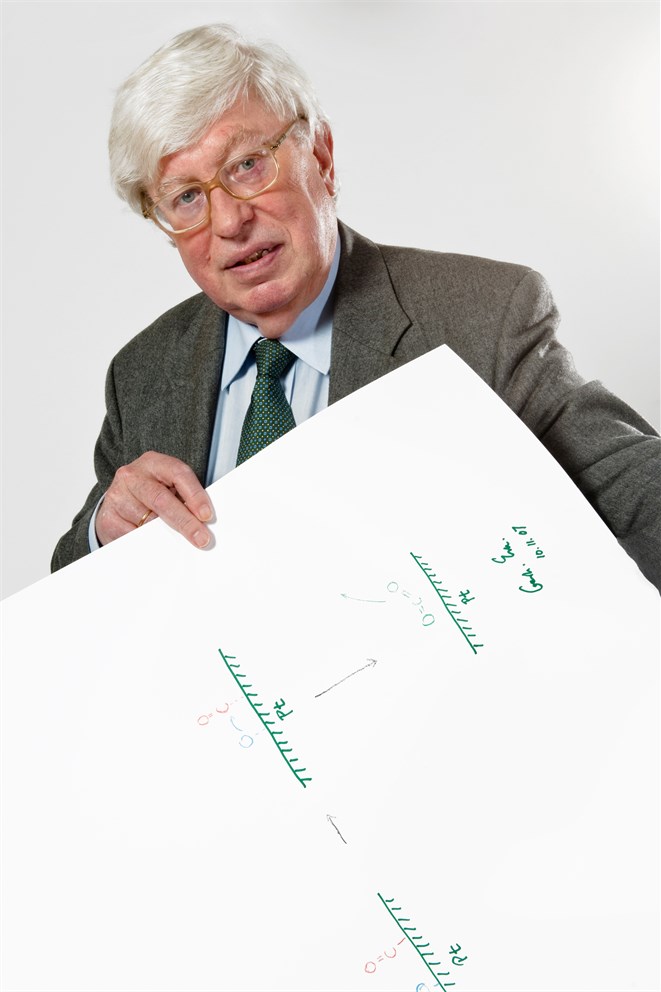 Ertl has a big office and I have plenty of space to set up my big backdrop! But his
phone is always ringing. Itʼs journalists, who want to talk to him. After he has
turned down a few requests, he asks me to pick up the phone
and answer on his behalf: No time, no interviews!
I ask him why I got the appointment with him when he turns down others.
He looks at me surprised: “I think you just asked me early enough!”

Chemistry at the Edge
by Adam Smith

Those green lines represent a frontier, the boundary between a solid surface and the air. Studying the chemical reactions that occur in this region is a painstaking process. It requires extremely precise experimentation and the development of new techniques to permit the visualization of reactions occurring in a monatomic layer. This is essentially two-dimensional chemistry. It has also been Gerhard Ertl’s life’s work.

Ertl set himself bold challenges, for instance understanding the Haber-Bosch process, an ammonia-generating reaction of huge industrial importance that had been used since the First World War without anyone knowing precisely how it worked. What he has illustrated here is another everyday process for which he elucidated the mechanism; the catalytic conversion of carbon monoxide to carbon dioxide on a platinum surface, such as occurs in car exhausts. Starting at the top left, red carbon monoxide and blue oxygen molecules arrive at the platinum surface and bind to it. The bond between the two blue oxygen atoms in the O2 molecule then breaks, allowing one of the oxygen atoms to attach to the toxic carbon monoxide molecule, producing less harmful carbon dioxide, CO2. The carbon dioxide then detaches from the platinum, rejoining the gas phase above the surface.

A hallmark of Ertl’s approach has always been his willingness to return to the same research questions whenever technology became available that opened new avenues for investigating an old problem in a fresh way. The catalytic conversion reaction above was an example of one he investigated over decades. While it was more or less clear that it must involve the interaction of oxygen atoms with the carbon monoxide molecules, it was not so clear whether this reaction required only one species to be absorbed onto the surface, with the other in the gas phase, or whether both species had to be bonded to the surface, as in the end turned out to be the case.

Ertl reflects that “you always live with pictures and so I think drawing is also a part of our work. Either you draw a formula or you depict a schematic of how a reaction may proceed. You should have simple pictures, but not TOO simple. Very often simplification is over simplification, and then you get the wrong result. That’s definitely a grave danger.”