Stem cells are a key component in animal tissue renewal, as they are capable of replicating themselves as well as creating different cellular offspring. Work (largely theoretical) on their use dates back 100 years. In the 1950s, Leroy Stevens developed a strain of mice with a high incidence of spontaneous teratomas. Further work, including that of Barry Pierce, showed that the wide diversity of different cell types in these tumours arose from embryonic stem cells. Evans obtained a batch of these ‘129Sv’ mice in the early 1970s out of the tumours embryonal carcinoma (EC) cells grew in tissue culture. These were able to be grown into all kinds of cell types, including skin, nerve, cardiac muscle, etc.

Evans saw the potential in using these EC cells not only for cell culture studies but also for creating genetically manipulated mice. Together with Richard Gardner in Oxford he succeeded but found that the mice carrying EC derived cells developed multiple tumours and could not contribute to the germline. In 1980 Evans teamed up with embryologist Matt Kaufman to combine cell culture and embryo manipulation and soon found the sought-after pluripotential cells. These were the embryonic stem (ES) cells that became critical for the success of gene targeting. Evans and Kaufman published their report on ES cells in Nature in July, 1981, pointing out the possibility of using ES cells for gene modification. Evans’ team was able to demonstrate the introduction of foreign DNA into the mouse germline in October, 1986, concluding that “cultured embryonic cells provide an efficient means for the production of transgenic animals”. Evans’ mice have proved invaluable as the ‘genetically modified mice’ of modern medical research, used by fellow laureates Capecchi and Smithies in their targeted gene “knockout” experiments. These experiments allow scientists to establish the roles of individual genes in health and disease, including cardiovascular and neurodegenerative diseases, diabetes and cancer.

Martin John Evans was born on the first day of 1941 in Stroud, Gloucestershire. He studied at Christ’s College, Cambridge, before going on to University College, London in 1963, where he earned his PhD in 1969. By then he was already working at UCL as a lecturer in anatomy and embryology. From 1978–1999 he worked in the department of genetics at Cambridge University and during this time he began working with Kaufman. Since 1999 he has been a professor of mammalian genetics and the Director of the School of Biosciences at Cardiff University in Wales. From 2009 to 2017 he was chancellor of Cardiff University and remains professor emeritus of the university.

His wife Lady Judith (granddaughter of Welsh artist Christopher Williams) beat Sir Martin to the awards, gaining an MBE (Member of the Order of the British Empire) in 1993 for her services to practice nursing. Evans himself was knighted on his birthday in 2004. The couple has one daughter and two sons.

This adapted text and the picture of the Nobel Laureate were taken from the book: "NOBELS Nobel Laureates photographed by Peter Badge" (WILEY-VCH, 2008). 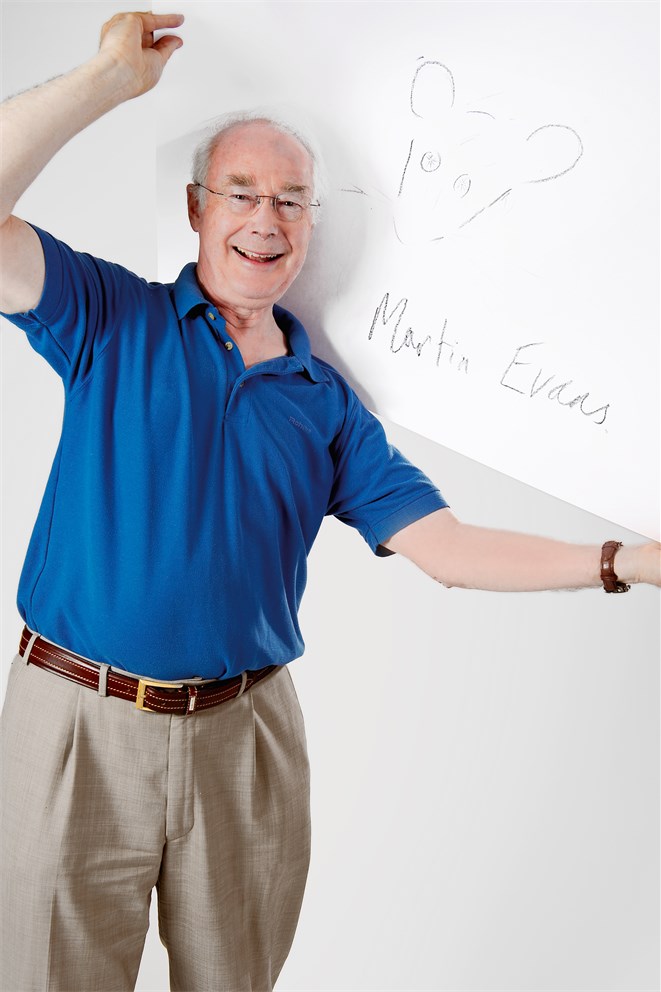 Martin Evans participated in my project twice! First he made me a drawing of the process he used in his stem-cell work that got him the Nobel Prize: A precise rendering executed with a light hand.
He tells me that he is currently being painted for the National Portrait Gallery in London, a process he enjoys and that got him interested in art. The picture he holds here is his second – and preferred – drawing: A mouse. Nothing else but his signature. No lab-mice, no Nobel Prize, at least in this case.

The Modified Mouse
by Adam Smith

This isn’t just any mouse. This is a chimeric mouse, made by putting embryonic stem cells into a mouse embryo. And thus this mouse represents the essential step in Martin Evans’ contribution to the work that led him and his collaborators, Oliver Smithies and Mario Cappechi, to develop the genetically-altered mouse, now an essential component of the experimental toolkit of laboratories the world over for investigating the role of individual genes or gene mutations.

“The sketch was a very rough and ready quickie,” says Evans, but “look at its eyes. Now you would normally just put two circles for the eyes and I put little lines in the eyes. Now those lines are what you can see in the chimeric mouse. Some mice have got pink eyes, some mice have got dark eyes, and what I was using was embryonic stem cells that come from a dark-eyed mouse and I was putting them into an embryo that would, without any further ado, form a pink-eyed mouse. And what we have here is a mouse with streaks of dark in its pink eyes. And that’s what you see. I’ve been fairly accurate and you can see a little circle in the middle and that would be the little circle in the middle of this mouse’s eyes; he’s looking at rather bright lights.”

Martin Evans had been exploring developmental biology and the genetics of mice, and had found a way to make a mouse partly from cells grown in tissue culture and partly from a normal embryo. Not only that, but he was able to make chimeric mice in which the cells derived from tissue culture provided the germ cells; i.e. the eggs and sperm. That meant he could effectively breed mice from tissue cells in culture. Meanwhile, Mario Cappechi and Oliver Smithies had found a way of altering the genes of different sorts of cells in tissue culture by a process known as homologous recombination.

Evans then got in contact, first of all with Oliver Smithies and then with Mario Capecchi, to demonstrate to them how his cells could be used to make a mouse and that mouse could breed. Combining their approaches allowed them to introduce changed genetic forms into mice and breed from the resulting engineered mice, thus creating the genetically-altered mice strains we know today and providing a way of testing the effects of the discrete gene