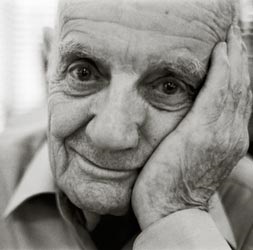 John Bennett Fenn received one of the 2002 Nobel Prizes in Chemistry together with Koichi Tanaka for their work in the field of mass spectrometry, Fenn specifically for the electrospray ionization technique used to identify and analyse biological macromolecules. This helped pharmaceutical companies to develop life-saving AIDS medications (protease inhibitors) in the 1990s.
Fenn was born in 1917 in New York and grew up first in New Jersey and then, when forced out by the Great Depression, in Berea, Kentucky. Fenn’s father taught engineering at the local college, where Fenn gained a BA in science in 1937 and went on to Yale, earning his PhD in 1940. At the end of his second year he married Margaret Wilson, his supervisor at Berea and ten years his senior. She died in a car crash in 1992. They have three children.

After graduation Fenn worked for Monsanto Chemical Company in Alabama, where he met James W. Mullen II. The pair dreamt of starting a research firm, but when they both quit in 1943, Fenn moved to Michigan where he worked for Sharples Chemicals. In June, 1945, however, a letter came from Mullen who had started his company in Richmond and was working on a ramjet- powered anti-aircraft missile for the US Navy. Fenn joined the company until 1952, when he was invited to Princeton as a director of the US Navy SQUID program for jet propulsion. In 1960, Fenn was working on vacuum systems and vapour analysis – which would eventually earn him a Nobel Prize, but for its medical rather than military use. His basic idea – which he found others had worked on as early as 1928 – was to boost a rocket’s thrust by seeding a light propellant, such as helium, with heavier molecules of argon. The lighter molecules pass through a jet nozzle faster, sweeping along the heavier molecules beyond their normal speed. The heavier molecules give the rocket more kinetic ‘kick’, and the higher their speed, the bigger the kick.

In 1967, he returned to Yale University and began new research in spectrometry, adapting the jet idea to replace the ‘heavy molecules’ with organic samples for study. Thus the same system for steering rockets in space is used for studying interactions between enzymes and drugs. In 1988, at the age of 70, he invented the electrospray ion source, which eventually earned him the Nobel Prize. It is somewhat ironic that Yale at the same time tried to force Fenn to leave because of his age (he eventually left to join Virginia Commonwealth University in 1994). His Nobel citation noted that the method: “has led to understanding the processes of life [and] revolutionised the development of new pharmaceuticals.”