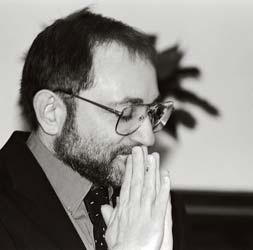 Andrew Fire shared the 2006 prize in physiology or medicine with Craig Mello for their work on RNA interference (RNAi) – a process in all living things, animal and vegetable, that fools cells into shutting specific genes down, often as a defence against viral infections.

In humans, for example, only a fraction of the 30,000 available genes are used in each cell. These are controlled by messenger RNA (mRNA) which carries the DNA instructions for the cell’s manufacture of proteins. The genetic code in mRNA is described as being the ‘sense’ sequence, that in RNA is ‘antisense’. Working with the minute nematode worm Caenorhabditis elegans, Fire and Mello found the process could be interrupted. By injecting sense and anti- sense RNA together, the worms displayed similar symptoms to worms that lacked a functioning gene for muscle protein. The explanation is that when sense and antisense RNA molecules meet, they bind together and form double-stranded RNA. This alerts the cell to degrade mRNA molecules carrying a genetic code identical to that of the double-stranded RNA. Many viruses have a genetic code that contains double-stranded RNA and ‘jumping genes’, also known as transposons – DNA sequences that can move around in the genome and can cause damage if they end up in the wrong place, so RNAi identifies the likely problem and nips it in the bud. RNAi is now being used to study possible new gene therapies.

Andrew Zachary Fire was born in Palo Alto, California in 1959 and raised in Sunnyvale, California. He attended Fremont High School, and the University of California, Berkeley gaining a BA in mathematics in 1978 at the age of 19. He then proceeded to the MIT, where he received a PhD in biology in 1983 under Phillip Sharp. Fire then moved to Cambridge, England, to work at the MRC Laboratory of Molecular Biology under Sydney Brenner. From 1986–2003, Fire was on the faculty of the Carnegie Institution of Washington’s Department of Embryology in Baltimore, where he and his team worked on RNAi in conjunction with Mello’s team at the University of Massachusetts. In 1989 he became an adjunct professor of biology at Johns Hopkins University and joined Stanford in 2003.

He has received several awards, mainly with Mello, including the Wiley Prize, and both are members of the National Academy of Sciences. Their discovery of RNAi was named the 2002 ‘Breakthrough of the Year’ by Science magazine and was also on Science’s list of the top 10 scientific advances in 2003. Fire serves on the Board of Scientific Councelors and the NHI’s National Center for Biotechnology. He is married to Rachel Krantz.