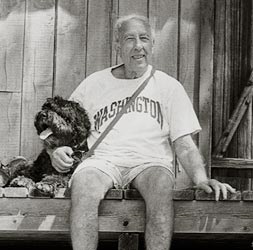 Edmond Henri Fischer shared the 1992 Nobel Prize in Physiology or Medicine with Edwin Krebs, a colleague at the University of Washington, Seattle, for their discoveries concerning reversible phosphorylation, a biochemical mechanism that governs the activities of cell proteins. Protein interactions are strictly controlled. One of the most important regulatory mechanisms is phosphorylation and dephosphorylation of proteins. Both these processes are in turn regulated by enzymes, allowing fine control. The process regulates things as diverse as mobilisation of glucose from glycogen, prevention of transplant rejection and development of a cancer form, such as chronic myeloid leukemia. Fischer and Krebs purified and characterized the first enzyme of this type; a protein kinase, sparking an active and wide ranging new area of research.

Fischer was born in Shanghai in 1920 to Austro/French parents. His maternal grandfather was a journalist for L’Aurore, which published Emile Zola’s “J’accuse…!” denouncement of the French government in the infamous Dreyfus Affair. His grandfather later went to Shanghai where he founded the first French newspaper published in China and helped to establish l’École Municipale Française where Edmond first went to school. At 7, Edmond and his two older brothers were sent to a Swiss boarding school and in 1935 he entered Geneva’s all boys Collège de Calvin and was also admitted to the Geneva Conservatory of Music, studying piano under Johnny Aubert.
During the war years, Fischer studied biology and chemistry and went on to study under Kurt Meyer, Head of the Department of Organic Chemistry. Fischer earned a PhD in 1947 and stayed on as a researcher until 1953. In that year he fulfilled his ambition to go to the United States, initially intending to join Caltech, but instead accepting an invitation to join the faculty at the University of Washington, Seattle, becoming a full professor in 1961. He soon teamed up with colleague Edwin Krebs to work on glycogen phosphorylase. The duo made their discoveries in the mid-1960s while studying reversible phosphorylation – the attachment or detachment of phosphate groups to cell proteins – and were the first to purify and characterize one of the enzymes involved in the process.

Fischer has two sons from his first marriage to Nelly Gagnaux, who died in 1961, and a stepdaughter from his second wife Beverley Bullock, whom he married in 1963 (†2006). Aside from the Nobel Prize, Fischer has received several other awards, many of them jointly with Ed Krebs and was elected to the American Academy of Arts and Sciences in 1972 and to the National Academy of Sciences in 1973. 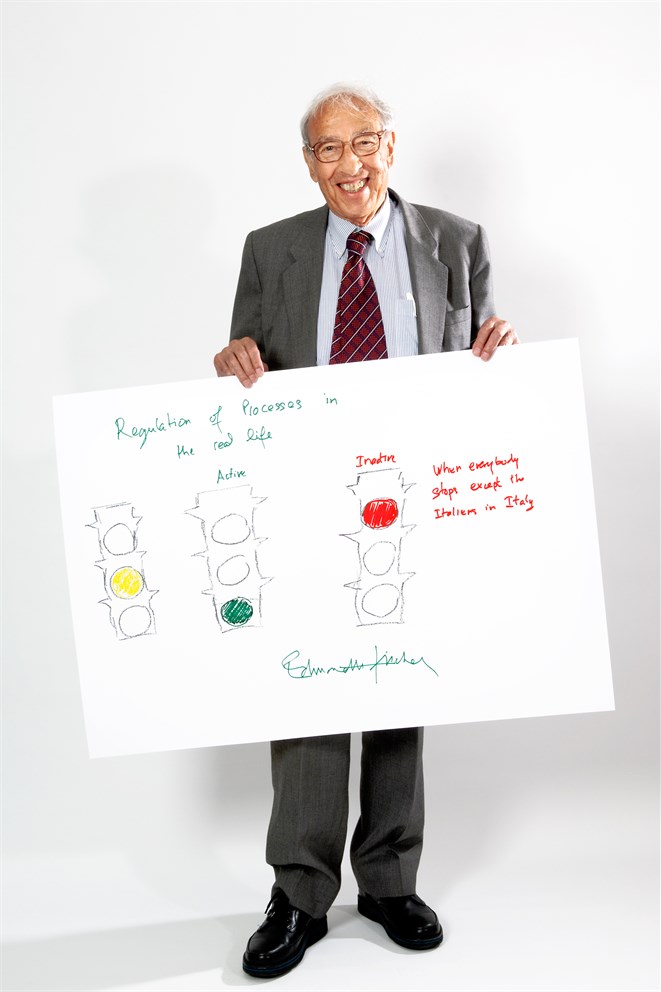 Fischer is a phenomenon – multilingual and humorous.
He was born in China with a Swiss passport.
My Italian assistant asks him (in English),
“What should we do now to
improve the lot of mankind?”
Fischer replies “I donʼt know
that.” Then he comments,
“Ma ricordo bene le ragazze a
Venezia dʼanni trenta!”
(But I remember very well the girls in Venice in the thirties!)

Stop, Go, and Everything in Between
by Adam Smith

You’re looking at one sort of regulatory system, a set of traffic lights. This is an analogy for another regulatory system, a way of controlling protein function in the body, the discovery of which led to the award of the Nobel Prize to Edmond Fischer and his colleague Edwin Krebs. But whereas traffic lights are, or at least should be, an all or nothing type reaction (either everybody stops or everybody goes through), protein function is regulated with exquisite sophistication.

Fischer and Krebs found that that most proteins that control the multitude of processes that go on in our bodies, such as muscle contraction or nerve conduction, can exist in two states: inactive and active. In the resting state of the cell they are inactive. But when you want to contract the muscle or have the nerve carry a signal, those proteins change their conformation. They switch from the inactive to the active form, and they do that by adding or removing phosphate groups; being ‘phosphorylated’ or ‘dephosphorylated’.

The enzymes that put the phosphates on are called kinases, those that remove them are called phosphatases, and the reactions are reversible. And unlike traffic lights, these enzymes can go through all different states of activation; we can activate an enzyme by one percent, five percent, ten percent, fifty percent and so forth. We can go through every level of activation, from full stop to 100% go..

The great sensitivity of the system lies in the balance between those two classes of enzymes in the cell, between the kinases that put the phosphates on and the phosphatases that remove them. Cancer and other diseases result when you have an imbalance in the system that causes the cell to malfunction, as happens for instance when the kinases are mutated and locked in the active conformation.

And as for Fischer’s comment about the Italians in the picture? Fischer recalls “I remember in Rome there was a red light, and people just continued going through it without raising an eyebrow.” Stretching the traffic analogy, that’s perhaps a little like the situation where our kinases become mutated, and the cell behaves like a car that runs wild because its accelerator is stuck to the ground.