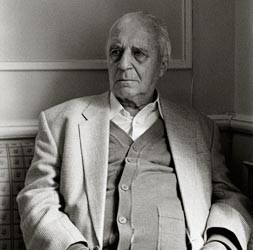 Ernst Otto Fischer was a German theoretical chemist who received the chemistry prize for his identification of a completely new way in which metals and organic substances can combine. He shared the prize with Geoffrey Wilkinson (1921–96) of the UK for similar independent work on organometallic ‘sandwich’ compounds. Organometallic chemistry began in the 18th century, with the first proper compound pre- pared in 1849. It was the first chemical bond between a metal atom and an organic carbon structure – such com- pounds are unnatural, and must be created by man. In the mid 20th century, several scientists investigated ‘sandwich’ compounds where a metal atom was bonded between two carbon atoms. Fischer and Wilkinson both theorised that compounds existed which contained bonds between metal atoms and a whole molecule, arranged in a way which has not been considered before.

In 1951 Fischer read about a new synthetic compound of unknown structure called ferrocene. He concluded that it consisted of two five-sided carbon rings with a single iron atom sandwiched between them. Wilkinson made this same discovery independently. Although they did not prepare the first sandwich they were the first to grasp the nature of the compound and its importance. Over the following decade they made many important contributions. Fischer also made a sandwich compound with chromium and benzen molecules, while Wilkinson united rhenium and hydrogen. Fischer and Wilkinson were said to have “revolutionised transition metal chemistry … and played the decisive role in our present day understanding of transition metal-carbon bonds.”

Fischer was born in Solln, near Munich, in 1918. His father was professor of physics at Munich. After school, in 1937, he performed military service and was still in uniform when WWII began. He served in Poland, France and Russia, but in the winter of 1941/2 started a chemistry course at the Technical College in Munich. After the war he resumed his studies, graduating in 1949, and gaining his PhD in 1952. He stayed on at the Inorganic Chemistry Institute, researching the organometallic chemistry of transition metals, and was appointed a lecturer at the Technical College in 1955. In 1957 he became Professor at the University of Munich, rising to Senior Professor in 1959 and Chair of Inorganic Chemistry in 1964. Throughout his career he accumulated awards and accolades, and he has toured the world as a visiting lecturer. In the 1960s his group discovered a metal alkylidene and alkylidyne complexes, known as Fischer carbenes and Fischer-carbynes. He passed away on July 27, 2007.