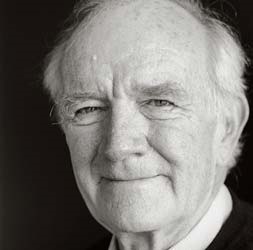 Val Logsdon Fitch received the 1980 physics prize with James Cronin for proving in a 1964 experiment that some subatomic reactions do not adhere to basic symmetry principles, suggesting that reversing the direction of time would not precisely reverse the course of certain reactions of subatomic particles. By examining the decay of kaons they found that a reaction run in reverse does not merely retrace the path of the original reaction, which showed that the interactions of subatomic particles may not be indifferent to time. This phenomenon is known as CP violation.

CP is the product of two symmetries: C for charge conjugation, which transforms a particle into its antiparticle, and P for parity, which creates the mirror image of a physical system. This symmetry is slightly violated during certain types of weak decay. Since one believes that the product CPT, where T stands for time reversal, is always conserved, CP violation can be interpreted as implying T violation, as described above. The discovery was made at Brookhaven National Laboratory using the proton accelerator AGS to produce a beam of neutral elementary particles. Their radioactive decay in flight was recorded and measured. The type of neutral kaons (K-mesons) which Cronin and Fitch studied can be regarded to consist of one half ordinary matter and the other half antimatter. The result showed for the first time that the left-right asymmetry (P) is not always completely compensated by transforming from matter to antimatter (C).

Fitch, the youngest of three children, was born on a cattle ranch in Merriman, Nebraska, in 1923. His father was an honorary chief with the local Sioux Indians but, after being injured in a fall, had to give up ranching and the family moved to the nearby town of Gordon. During WWII, Fitch was sent to Los Alamos, New Mexico, to work on the Manhattan Project. During his three years there he became fascinated by physics. He graduated from McGill University in Montreal, Canada, with a bachelor’s degree in electrical engineering in 1948 and was awarded a PhD in physics by Columbia University, New York, in 1954.

He then joined the faculty of Princeton University that year, and spent the next 20 years studying K-mesons with his students. While performing experiments at Brookhaven in 1958 he met Cronin and invited him to join his work at Princeton. In 1964 the duo showed in a series of experiments at Brookhaven that the decay of K-mesons could violate the general conservation law for weak interactions known as CP symmetry, and thereby overturn the long-held principle of time-reversal invariance.

At Princeton, Fitch was made Cyrus Fogg Brackett professor of physics and in 1976 chairman of the Physics Department.
He has two sons from his first marriage to Elise Cunningham who died in 1972. In 1976 he married Daisy Harper, with whom he has three stepchildren.
Val L. Fitch passed away on 5 February 2015, at the age of 91.

This text and picture of the Nobel Laureate were taken from the book: "NOBELS. Nobel Laureates photographed by Peter Badge" (WILEY-VCH, 2008).