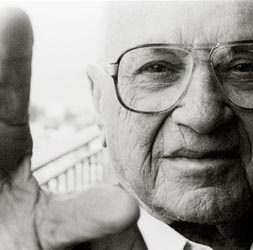 Believe it or not, many economists do not consider money to be very important. Most advocate a narrow interpretation of Keynesian theory, ignoring money and monetary policy when analysing business cycles and inflation. Milton Friedman set out as a Keynesian supporter of the New Deal, but moved to the right in the 1950s as a reaction against high taxation and the welfare state. Friedman didn’t see himself as right-wing, however, arguing that he simply sup- ported liberal freedoms in the marketplace as a route to political freedom. His ideas paved the way for the monetarist policies of Ronald Reagan and Margaret Thatcher in the 1980s, and played a major role in the transformation of China’s economy.

He was the first to challenge the ‘Phillips Curve’ as a cure for unemployment through inflation. His major work, ‘A Monetary History of the United States, 1867–1960’, not only shaped later monetary policy but highlighted the role of existing policy in creating and prolonging the Depression of the 1930s.

Friedman was born in Brooklyn in 1912, the youngest of four children to Austro-Hungarian parents, and grew up in Rahway, New Jersey. He graduated from Rahway High School in 1928 and gained a scholarship to Rutgers University. He studied mathematics, but was drawn to economics in the hope that therein lay the solution to the Depression. He gained a BA in both topics in 1932, progressed to Chicago for his MA (1933) and joined the federal New Deal research team in Washington DC in 1935. At the time he toed the Keynesian line on taxation but opposed government price fixing. In 1943, Friedman joined the Division of War Research at Columbia University. The university awarded him a PhD in 1946.

After a brief stint at the University of Minnesota, Friedman returned to Chicago to teach, also working for the National Bureau and the Marshall Plan in Europe, which prompted his paper ‘The Case for Flexible Exchange Rates’. In 1964 he was an economic adviser to Barry Goldwater in his bid for the presidency, and, in 1968, joined Richard Nixon’s advisers, but refused a full-time post in Washington. In 1977, he retired from teaching at Chicago and became a senior research fellow at the Hoover Institution at Stanford University. During the 1980s and early ’90s Friedman lectured in China, which has since reinvented itself as a capitalist-communist financial superpower.

Friedman married fellow Chicago economics student Rose Director in 1938. They have two children and in 1996 set up The Milton and Rose D. Friedman Foundation devoted to promoting parental choice in schooling. Friedman was awarded the Presidential Medal of Freedom and the National Medal of Science in 1988. He died in November 2006. Arnold Schwarzenegger, Governor of California, subsequently declared January 29, 2007 as Milton Friedman Day.