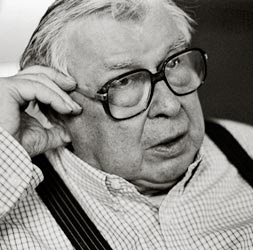 Daniel Carleton Gajdusek received the award physiology or medicine for his identification of a peculiar disease related to cannibalism, potentially saving an entire New Guinea tribe.

Gajdusek was born in Yonkers, New York, in 1923 and learnt natural science from his aunt, an entomologist. By the age of ten, he was a talented chemist (as a teenager he created a commercial weed killer) but his ultimate aim was biology. He studied physics, biology, chemistry and mathematics at the University of Rochester, New York, graduating in 1943, and gained an MD from Harvard in 1946. After research at Columbia, Caltech and Harvard he served in the army as a virologist. From 1952–53 he worked in Teheran, moving in 1954 to the Walter and Eliza Institute in Melbourne, Australia, where he began his Nobel work.

The Fore indulged in ritual funerary cannibalism. Lindenbaum had observed that kuru victims were highly regarded as food, and women fed softer morsels, such as the brain and other organs, to their children and the elderly. As a result women, children and the elderly formed almost 90 percent of the kuru victims. Gajdusek concluded that kuru was spread by eating the diseased brains. When he persuaded the Fore to give up the practice, the disease soon disappeared. Later research by others identified infectious proteins called prions as the cause of kuru. Prions cause spongiform encephalopathy diseases, in which the brain is riddled with holes, as in the cattle disease BSE, the sheep disease scrapie and human CJD. All are fatal.

Gajdusek became head of virological and neurological research at the National Institutes of Health in 1958 and joined the National Academy of Sciences in 1974. He shared the 1976 Nobel Prize with Baruch Blumberg (who identified the antigen that indicates hepatitis-B, thus making it possible to screen blood donors).

This text of the Nobel Laureate was taken from the book: "NOBELS. Nobel Laureates photographed by Peter Badge" (WILEY-VCH, 2008).
s”.