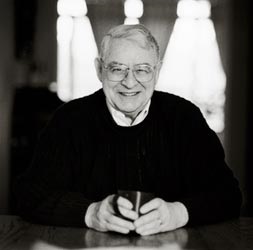 Riccardo Giacconi received one of the two 2002 physics prizes for his “ pioneering contributions to astrophysics, which have led to the discovery of cosmic X-ray sources”. The other prize was split between Raymond Davis Jr. (USA) and Masatoshi Koshiba (Japan) for the detection of cosmic neutrinos, confi rming the power source of the Sun. But while Davis and Koshiba went deep underground and waited for the stars to come to them, Giacconi took a more proactive approach. The Sun and all stars emit radiation at various wavelengths, both visible and invisible. X-ray radiation is absorbed in Earth’s atmosphere so, in order to investigate cosmic X-rays, it is necessary to place equipment in space. Giacconi built the first space X-ray telescopes, providing clear new images of the universe and laying
the foundations of X-ray astronomy.

Giacconi was born in Genoa, Italy, in 1931, but grew up in Milan until he was 25, apart from when the war was at its height, between 1942–44. His mother, Elsa, was a mathematics and physics teacher and wrote several books on geometry, and Riccardo was a keen reader. His schooling was mixed and he spent some time travelling, even working on an English trawler in Grimsby. Even so, he skipped the last year of school and went directly to the University of Milan, where he was inspired by laboratory physics and cosmic ray studies and obtained his PhD in 1954 after just four years. He was promptly hired as an assistant professor, but Giuseppe Occhialini, a renowned if eccentric physicist, advised him to go the US. He obtained a fellowship and sailed for the US in 1956.

He worked with RW Thompson for two years in Bloomington, Indiana, and then moved to Princeton in 1958. After an uninspiring visit to CERN in Geneva, Giacconi returned to the US in 1959 to join AS&E to initiate a program of space sciences. In three years his group at AS&E grew from 3 people to 70, putting together satellite rocket payloads. The team designed the first x-ray telescope in 1960 and it was launched in 1962. In 1973 Giacconi moved with eight of his team to Harvard and over the next two decades worked on the UHURU, Einstein and Chandra projects before becoming the first director of the Space Telescope Science Institute and working on the Hubble telescope.

In 1993 Giacconi became director general of the European Southern Observatory, working on the ground-based VLT (Very Large Telescope) scheme in Munich. He returned to the US in 1999 as president of Associated Universities Inc, working with the National Radio Astronomy Observatory as the Executive for the Atacama Large Millimeter Array (ALMA). Giacconi and his wife Mirella, a childhood sweetheart from Milan, have two daughters.