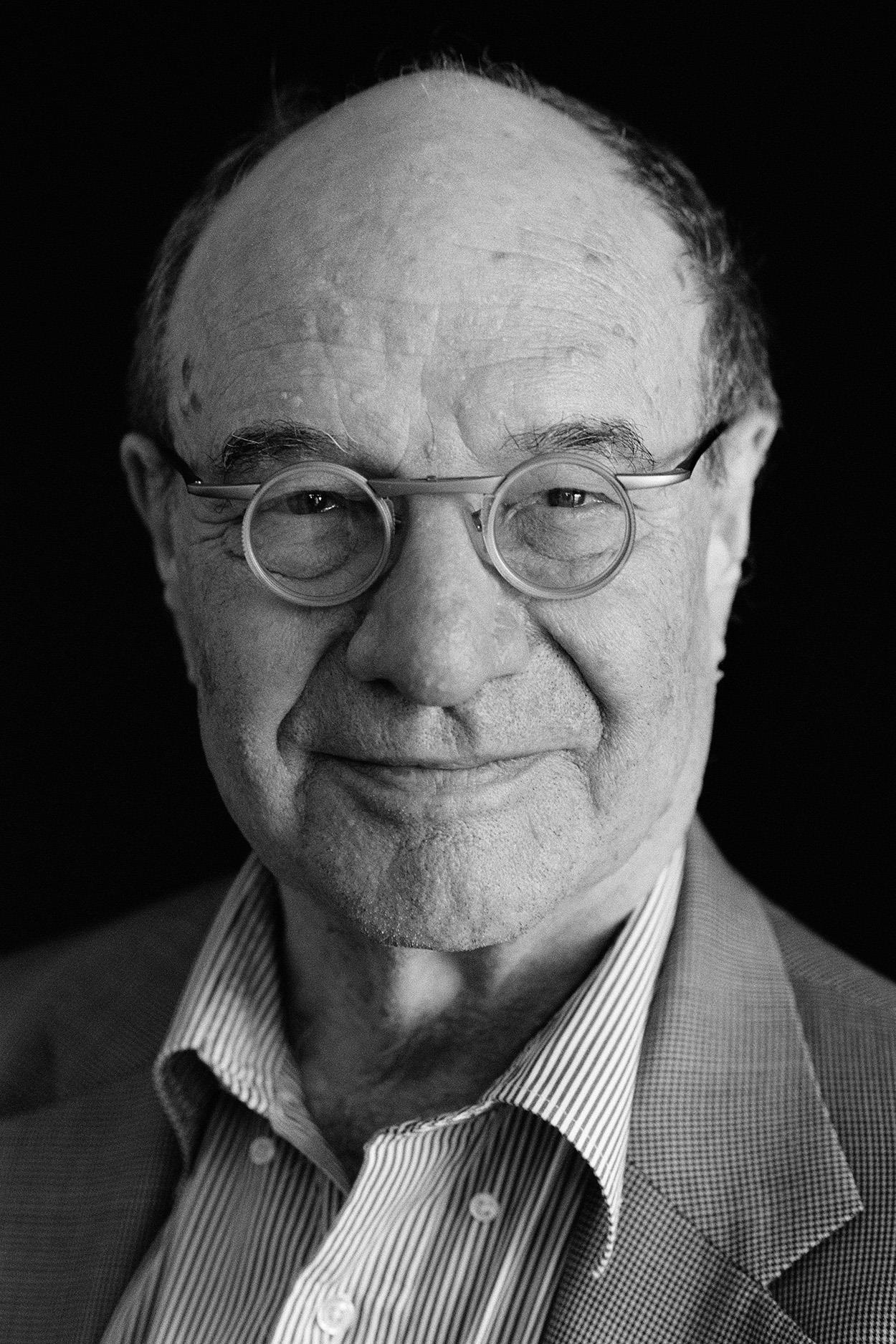 Walter Gilbert, born March 21, 1932, to an economist, then teaching at Harvard University, and a child psychologist, majored in Chemistry and Physics at Harvard, B. Sc. Summa Cum Laude in 1953, and went on to graduate work in Theoretical Physics at Cambridge University, working in the Quantum Theory of Fields with Abdus Salam (1979 Nobel Prize), Ph. D. in Mathematics in 1957. Returning to Harvard, after a year as a postdoctoral fellow he became the assistant to Julian Schwinger (1965 Nobel Prize) and then, in 1959, an Assistant Professor in the Physics Department, teaching a range of courses in Theoretical Physics including Quantum Mechanics and Relativity.

The molecular biologist James Watson (1962 Nobel Prize) invited Gilbert to join him in the search to identify messenger RNA (mRNA), an unstable nucleic acid that carries the information to specify a protein from the DNA to the ribosome where the protein is made. Gilbert became fascinated with laboratory Biology, working then on protein synthesis and on the control of genes by repressors. Harvard tenured him in 1964 in Biophysics, in1968, a Professor of Biochemistry and in 1972, an American Cancer Society Professor of Molecular Biology.

Walter Gilbert was awarded the 1980 Nobel Prize for Chemistry together with the biochemists Frederick Sanger (GB) and Paul Berg (USA). The prize recognized the field of Recombinant DNA, to Berg for the technology of moving genes into new organisms, and to Gilbert and Sanger for the ability to completely decipher those genes. Gilbert and Sanger developed, independently of one another, rapid methods for determining the exact sequence of the chemical groups, the bases, in DNA. Both methods determined the position of a base by measuring its distance from a specific point, by making a DNA fragment whose length ran out to the base of interest. Sanger’s method made such fragments enzymatically; Gilbert’s method made them by base-specific chemical cleavage. Both methods could read hundreds of bases in a single afternoon, where before a single base might take a month. By the time of the prize in 1980, about a million bases of DNA had been sequenced around the world. The 3 billion bases of the human Genome were worked out by 2000. The development of ever more rapid sequencing has now led to thousands of genomes of all species being understood, and the detailed evolution of our species, and the modifications of our cells in disease becoming known.

In 1978, Gilbert and Phillip Sharp (1993 Nobel Prize) and a group of European Scientists founded the biotechnology company Biogen, of which Gilbert became CEO. In 1981. Gilbert returned to Harvard in 1985 and worked on the early evolution of genes until he retired in 2001.

Gilbert co-founded Myriad Genetics, which identified the genes involved in hereditary breast cancer, and is still a director. He is on the board of Amylyx Pharmaceuticals, which is doing clinical trials in ALS.

Since 2002, Gilbert has been doing digital art and has had many one-person shows: http://wallygilbert.com.

Residing in Cambridge, MA, he is married to Celia Gilbert, a poet and artist, and has two children and four grandchildren. 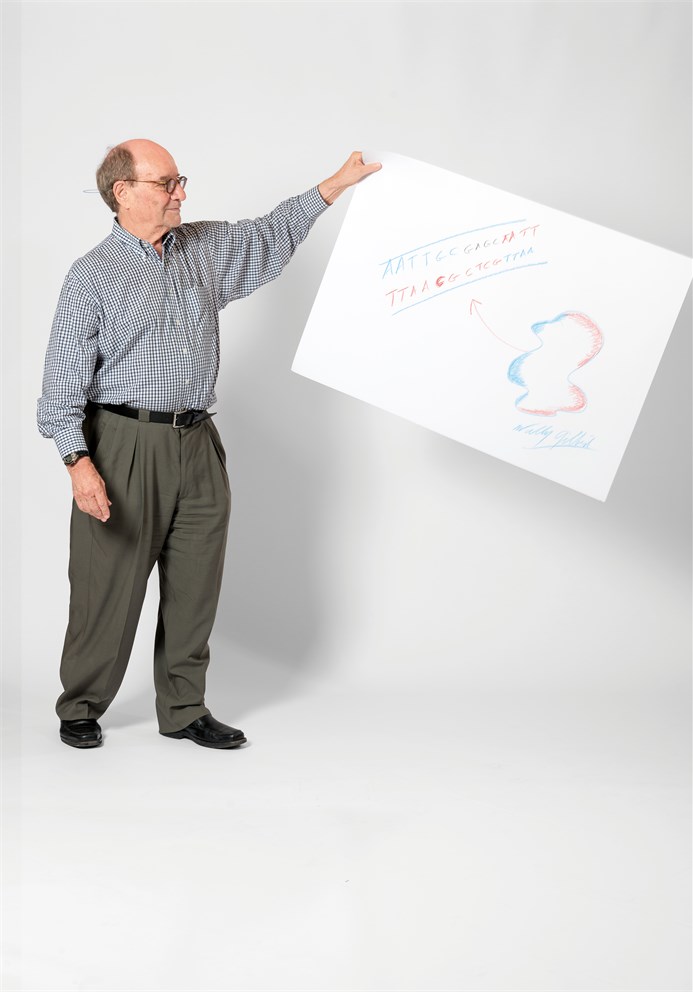 Walter Gilbert with his "Sketch of Science"

These days Walter Gilbert is very much an artist, he has his own studio and and his work is exhibited. His choice of colours and the precise execution of his sketch reflect this.
But when he suddenly takes out his smartphone and starts to look up various webpages, it becomes clear that scientific detail matters, too:
„I'm trying to find you the original DNA sequence we used for the sketch! But I can't find it... So, this is just some sequence...!“

Wally Gilbert’s drawing depicts a discovery, but not the one for which he received his Nobel Prize. That Nobel Prize-awarded work, the development of a rapid method for sequencing DNA, helped drive the growth of modern biology. But here Gilbert has chosen to focus on an earlier piece of work of which he is more proud. “DNA sequencing is a technical invention that makes something possible, but doesn’t have any deeper meaning in its own right,” he says. In contrast, the discovery he symbolically illustrates here was one that truly increased our understanding of how biology worked.

In the mid 1960s, one of the critical questions being asked by biologists was how genes are controlled. Why do genes turn on in one cell and not in another? An answer to the problem had been proposed by François Jacob and Jacques Monod, who had themselves received the Nobel Prize in 1965. They suggested that genes were regulated by other genes, the presence or absence of the product of the second gene controlling the activity of the first. Gilbert’s illustrated discovery demonstrated that they were right.

The blob-like object represents a protein, called the lac repressor. As the arrow shows, it is about to interact with a stretch of double-stranded DNA. When the protein binds to the DNA, it blocks the synthesis of the enzymes that digest the sugar lactose. But when lactose enters a cell, it causes the lac repressor to separate from the DNA, allowing the gene to function normally. This very first demonstration that a protein could bind to a DNA sequence paved the way to our current understanding of the control of genes by transcription factors.

Gilbert is unusual, but not unique, in his interpretation of Volker Steger’s instructions. But he is certainly the only Laureate among the Volker’s ‘sketchers’ who is now a professional artist! “I’m mostly a photographic artist,” he explains, “And I do the art as an experimenter. I create an image by experimentation rather than by design, and there’s a similarity to the experimental side of science in which you’re dealing with a world where you go and you experiment with it to see what you learn, and you alter it by experiment. There’s an underlying similarity … the drive to create something new, the creation of a novel image in the art and the creation of a novel idea in the science.”