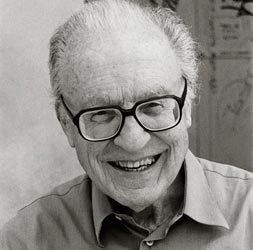 Donald Arthur Glaser was an American physicist and neurobiologist who received the 1960 physics prize for his invention of the bubble chamber, a device used to observe subatomic particles. At 34, Glaser was one of the younger scientists to be awarded a Nobel Prize.

He was born in Cleveland, Ohio, in 1926, and was educated in the public schools of Cleveland Heights. He progressed to the Case Institute of Technology, Cleveland, to study physics and mathematics, gaining his BSc in 1946. His bachelor’s thesis involved electron diffraction study of the properties of thin metallic films. After a brief period teaching at Case, he went on to Caltech, earning his PhD in 1949. His thesis involved an experimental study of the momentum of cosmic rays and mesons at sea level. Glaser then took a teaching and research post at the University of Michigan, rising to the rank of professor in 1957 before moving in 1959 to the University of California, Berkeley, as physics professor. Glaser’s main research interest was the elementary particles of physics. He built several diffusion cloud chambers, spark plates and other instruments before developing the bubble chamber in 1952.

The bubble chamber is a sealed vessel filled with a superheated liquid used to detect high-energy electrically charged particles (ions) moving through it. Pressurisation increases the liquid’s boiling point to the extent that it becomes hypersensitive to change. The ion deposits enough energy that the liquid begins to boil along its path, forming a string of vapour bubbles. The whole chamber is subjected to a constant magnetic field which causes the particles to travel in helical paths whose radii are determined by the ratio of charge to mass of the particles. The patterns are recorded and measured, allowing the particle masses to be calculated. Bubble chambers have largely been replaced by wire chambers, which allow particle energies to be measured at the same time.

In 1962 Glaser turned his attention to the new field of molecular biology, studying the control of DNA synthesis in bacteria, and cancer research. Around 1970, Glaser and two friends co-founded the first biotechnology company, effectively starting the GM industry in medicine and agriculture. Later on he moved into the field of neurobiology, particularly involving the visual system. In the years since 1960, Glaser was a consultant and advisor to many governmental organizations, industrial boards of directors, non-profit groups, and a member of the editorial boards of several scientific publications. He married twice – first Ruth Thompson in 1960, with whom he had two children and several grandchildren. In 1975 he married Lynn Bercovitz, a painter. 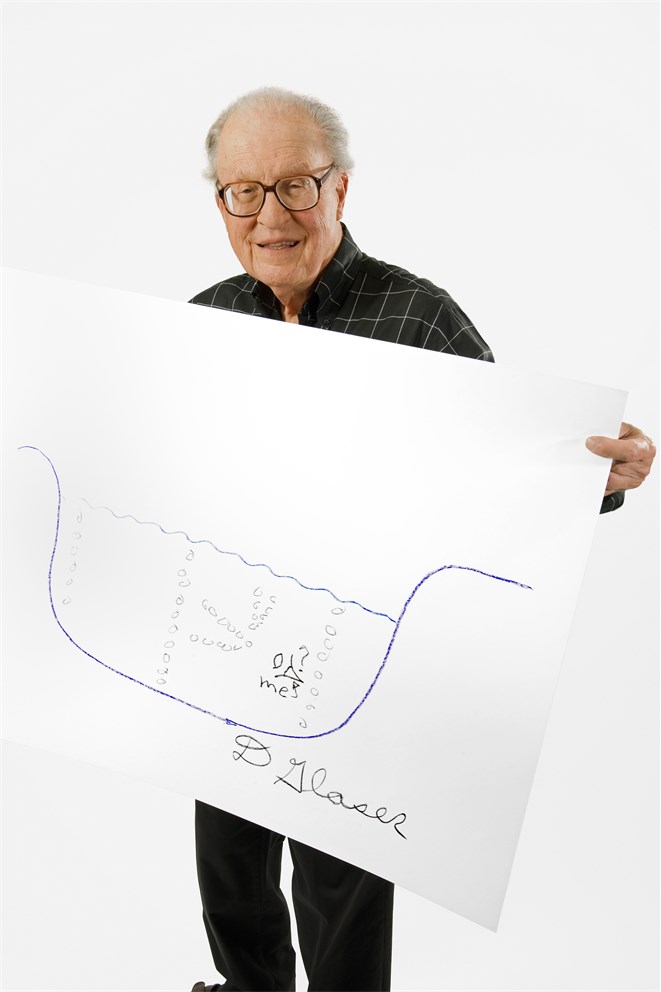 This is a man who had to worry that his house in California would burn down during our photo shoot! There were forest fires in just that area, and his wife was rather worried. She wanted to consult the internet and find out the precise location of the fires, but he had a better idea: “Just call the answering machine from your cell phone, if the thing picks up, the house is still there!”
The mere fact that his house could burn down, wonʼt distract a physicist from making a nice drawing of his Nobel discovery.

As a young man, Glaser was frustrated by the rate at which data could be collected in nuclear physics experiments and set out to develop an improved detector. In 1952, at the age of just 25, he succeeded, by first predicting and then proving that electrically charged particles would leave tracks of tiny bubbles, or ‘bublets’ as he called them, in a chamber filled with superheated liquid in a metastable state. The liquid, which in Glaser’s initial experiments was ether, is heated to high temperatures under pressure and then, at the instant that detection is required, the pressure over the liquid is suddenly reduced.

In the drawing he illustrates his ‘bubble chamber’, with two V-shaped pairs of tracks, in the middle of the chamber, which trace the path of a pair of charged particles that have just arisen from the decay of two neutral particles. The tracks appear just in front of the eye of the observer. As can be deduced from the oval lens drawn to the left of the eye, the observer is Glaser himself.

His invention was initially met with great scepticism, as he recounted in an interview for Nobelprize.org in the year 2000. His use of the word ‘bublet’ led to the rejection of his first article on the bubble chamber, and his application to try out his invention at Brookhaven National Laboratory was turned down with the comment that “It would be an irresponsible use of public funds to allow you to bring this thing to our laboratory.” After a while they relented sufficiently to allow Glaser to visit, but he was still not granted the experimental access to the particle accelerator he needed. The closest he was allowed was to be granted permission to sit next to a crack in the shielding of the Cosmatron particle accelerator, where he set up a card table and placed his bubble chamber on top of it. His friend Jack Steinberger surreptitiously hooked him up to allow him to follow when the accelerator ‘runs’ would occur, and by recording tracks from the particles that leaked through the shielding crack, he was able to demonstrate the power of his new device. “From then on, there was no problem getting money,” Glaser recalled.