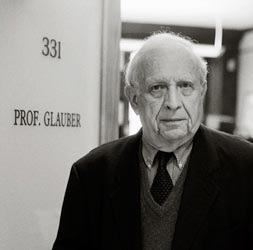 Light is one of the most intriguing things known to man. In a way it is ‘invisible’ yet lets us see, it is insubstantial yet it has been captured and condensed and wrought into lasers, it has even been said to be the key to time travel. Roy Glauber, the Mallinckrodt Research Professor of Physics at Harvard University and Adjunct Professor of Optical Sciences at the University of Arizona, was awarded one of the two 2005 physics prizes “for his contribution to the quantum theory of optical coherence”. The other prize was shared by John Hall (USA) and Theodor Hänsch (Germany) “for their contributions to the development of laser-based precision spectroscopy”. Just like radio waves, light is a form of electromagnetic radiation – it can be considered both as waves and as a stream of particles. Glauber’s theoretical description of the behaviour of light particles established the basis of Quantum Optics. He could explain the fundamental differences between hot sources of light such as light bulbs, with a mixture of frequencies and phases, and lasers which give a specific frequency and phase.

Roy Jay Glauber was born in New York in 1925. As a child he was a talented artist but also joined an astronomy club and had a potentially dangerous fascination with electricity. He attended Bronx High School of Science, which opened in 1938, and in 1941 graduated to Harvard University. At the age of 18 he was drafted into the Manhattan Project, calculating the critical mass for the atom bomb. He returned to Harvard, to gain his BSc in 1946 and his PhD in 1949, after which his former boss, Robert Oppenheimer, invited him to spend a postdoctoral year in Princeton at the Institute for Advanced Study. There he met Wolfgang Pauli and later worked with him in Zurich before returning to Princeton for a further year.

After a temporary teaching post at Caltech, where he studied electron diffraction by molecules and became interested in scattering theory, he returned to Harvard in 1952 where he continued this interest. The result was a nuclear diffraction theory similar in some ways to optical diffraction theory. The late 1950s brought the development of the laser. Glauber began to work on quantum optics and in 1963 he created his prize-winning model for photodetection. Apart from the Nobel, Glauber has received many honors for his research, including the AA Michelson Medal (1985), the Max Born Award (1985) and the Dannie Heineman Prize (1996). Glauber’s research at Harvard continued in areas of quantum optics, as well as topics in high-energy collision theory, and the statistical correlation of particles produced in high-energy reactions.

In 1960 he married Cynthia Rich, but were divorced in the early 1970s. Glauber raised their two children, Jeffrey and Valerie, as a single father. He had several grandchildren. 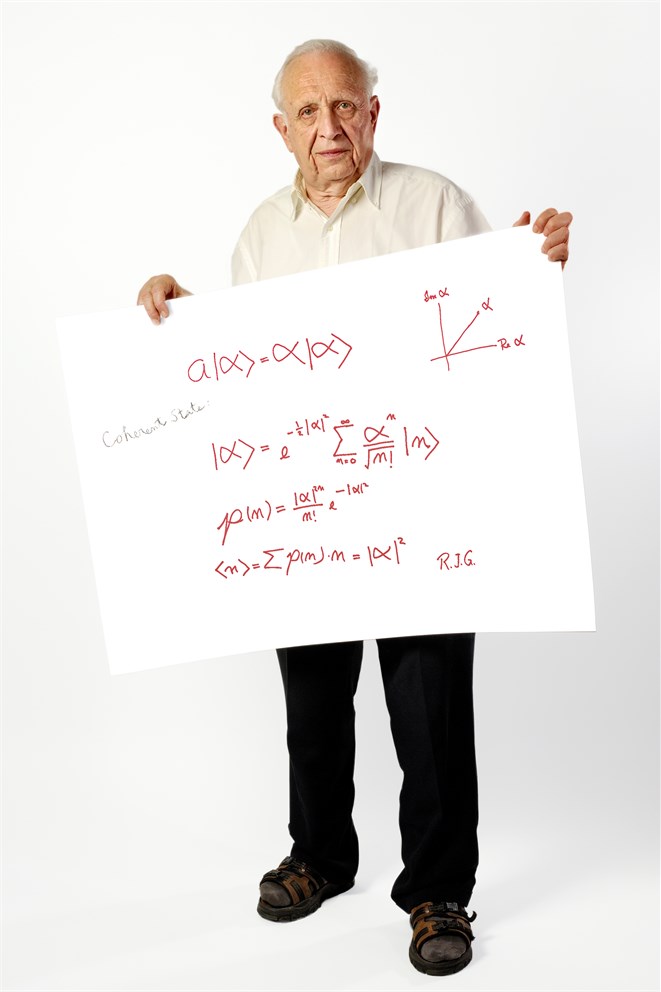 This man is very serious, but not unfriendly. He does not feel like
answering too many questions. But he likes to be photographed.
What he does not like is the idea of doing a drawing for me.
But he does in the end – drawing “his” formula.
He signs with his initials, the middle initial being “J”.
I ask what “J” stands for, but he doesnʼt want to tell me.
I donʼt mind, he has a great face!
“for his contribution to the quantum theory
of optical coherence”

“I wish we had been given a bit of warning,” says Roy Glauber, referring to his sketch, “because what I did was simply put down the equations that I am to some degree identified with. But others must have done a cleverer job of it.” The equations that Glauber wrote down stem from the world of quantum optics, in which the principles of quantum mechanics are applied to the study of light. They describe an innovation that Glauber introduced concerning the property of ‘coherence’, as seen, for instance, in the ability of a light wave to produce interference patterns. Most of us probably remember seeing such interference patterns in physics class, when we were shown how light travelling through side-by-side pinholes can produce a pattern of lighter and darker bands on the wall. Glauber’s contribution was to develop a complete quantum-theoretic description of coherence, leading him to coin the term ‘coherent state’, seen in his sketch. “I shouldn’t think it will have any meaning to anyone,” says Glauber with a gentle laugh, “save a handful of people who are in on the joke, as it were.”

Appropriately, 2005, the year of Glauber’s Nobel Prize (which he received together with John Hall and Theodor Hänsch) marked the one hundredth anniversary of Albert’s Einstein annus mirabilis in 1905. That year, among other discoveries, Einstein had provided an explanation of the photoelectric effect. This explanation, which suggested that light beams consist of particles, with energy proportional to the frequency of the light, gave birth to the quantum description of light and the field of quantum optics.

While at the Princeton Institute of Advanced Study at the beginning of the 1950s, Glauber used to meet Einstein regularly. “I used to pass him daily and we would greet one another with nods,” Glauber recalls, “I got up late in the mornings, and then rarely got to the Institute much before lunchtime at noon, and that was just about the time at which Einstein was calling it a day having opened his mail in the morning. He behaved warmly and charmingly, but the truth is he had had it with the quantum theory. And felt that we were incorrigible!”