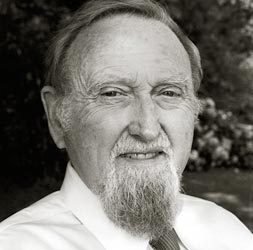 “I have had other honours but you can’t beat this one. It’s the top.” So said Clive Granger – not of his economics prize (shared with American Robert Engle) but of his inclusion at No 67 in a list of 100 Welsh Heroes.

To be fair, although born in Wales, in Swansea in 1934, Sir Clive’s parents moved back to England when he was a year old. At school in Cambridge he did well in mathematics but not much else. “A teacher told my mother that I would never be successful,” he recalls, “which illustrates the diffi culties of long-run forecasting on inadequatedata.”

He studied maths and economics at the University of Nottingham, England where he gained a PhD in statistics and, quite unintentionally, stayed on as professor. In all, he spent 22 years at the University before leaving for the University of California San Diego in 1974. He had already visited the States, however. In 1959 he spent a year at Oscar Morgenstern’s Econometric Research Project at Princeton, working on his ‘Time Series Project’ with Michio Hatanaka. In 1968, George Box and Gwilym Jenkins’ book ‘Time Series Analysis, Forecasting and Control’ prompted Granger to study the subject in greater depth. Joined by Paul Newbold – a student of Box – he began intense research, leading to their book ‘Forecasting Economic Time Series’. Their work included a small simulation study, which showed that in certain situations, standard statistical procedure often gave spurious results – at a stroke debunking many major economic publications. In 1974 Granger took a professorship at the University of California, San Diego, and in 1975 met Robert Engle, then at MIT. It was the start of a prize winning friendship. Engle joined UCSD as a time series econometrician.

Granger’s speciality is macroeconomics, and his great breakthrough concerned the relationship between different
financial or economic variables over time, or ‘cointegration’. This led to signifi cant breakthroughs in statistics and macroeconomic forecasting. He also developed a formal statistical notion of causality based on which variables help to predict other variables, known as Granger causality. During his lengthy career at UCSD he also served as visiting professor at Oxford and Cambridge (UK), Canberra (Australia), Aarhus (Denmark), and Wellington (New Zealand). In 2003 Granger retired and regulary visits Canterbury, New Zealand, and continued to teach both there and in Melbourne, Australia. It was there that he heard he had received the economics prize, for which he had heard that he
had been considered for 10 years. In 2005, Sir Clive was knighted, and Nottingham University renamed its economics
building in his honour. He is married to Lady Patricia, a research assistant from his Nottingham days, and has two children.

This text and the picture of the Nobel Laureate were taken from the book:
"NOBELS. Nobel Laureates photographed by Peter Badge"
(WILEY-VCH, 2008).