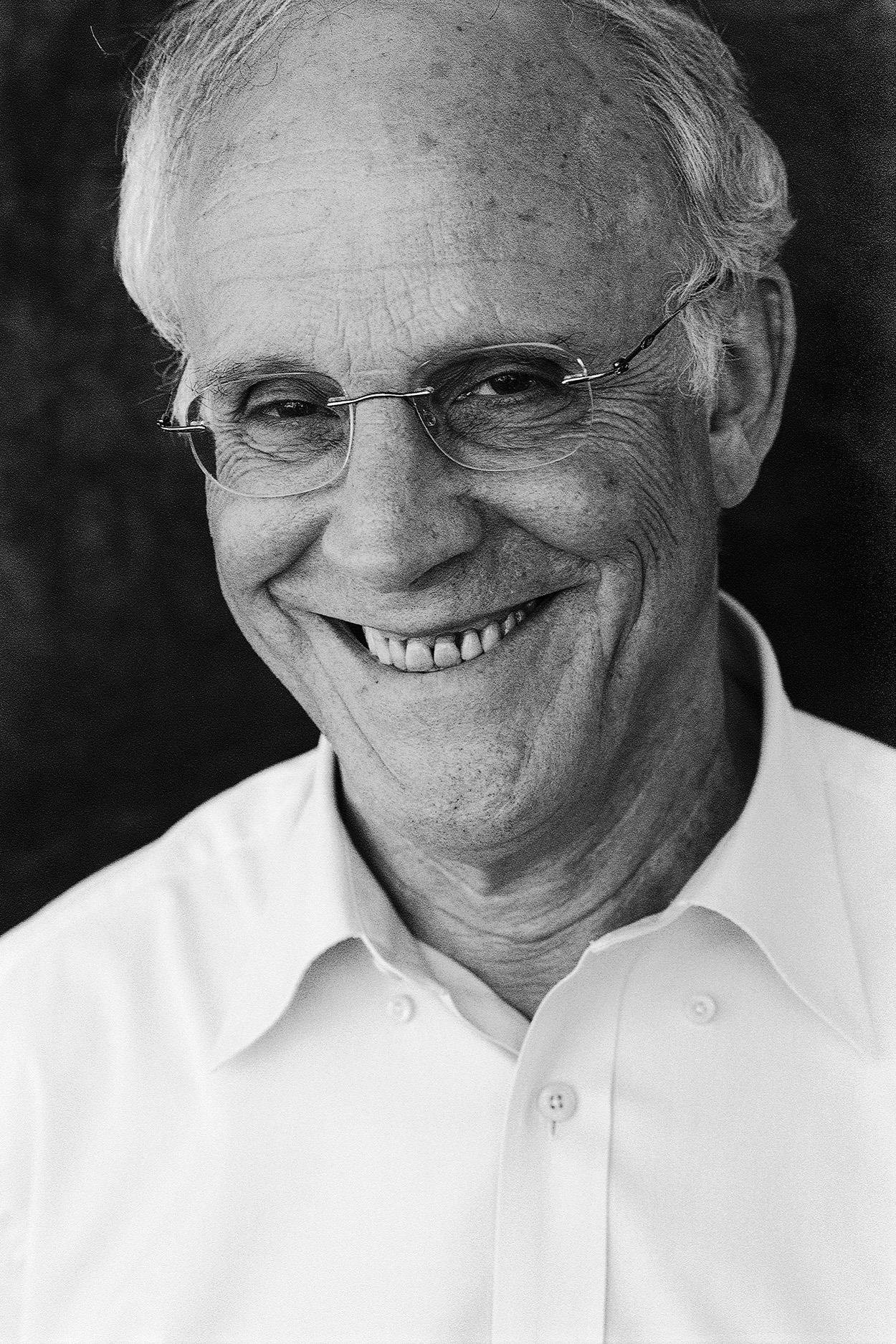 As every schoolchild knows, everything is made up from atoms. Every atomic nucleus is made up from quarks – the smallest ‘building block’ there is. What acts as the cement, binding the blocks together, is the ‘strong force’, also known as the ‘colour force’, which acts between the quarks inside the proton and the neutron. However, unlike conventional forces such as magnetism or gravity, where the effects are stronger the closer together the objects are, the strong force works more like a rubber band, stronger – as if stretched – when the quarks are apart, but relaxed when the quarks are in close proximity. Then the force is so weak that they behave almost as free particles. This phenomenon is called ‘asymptotic freedom’.

It was for this discovery that Gross, working with Frank Wilczek, and David Politzer, working independently, were awarded the Nobel Prize in Physics, 30 years after the theory was published in 1973 in a mathematical framework that came to be known as Quantum ChromoDynamics, QCD. This theory is an important contribution to the Standard Model, the theory that describes all the three forces that act within the atom and the nucleus: the electromagnetic force (which acts between charged particles), the weak nuclear force (which acts in radioactive decay) and the strong nuclear force that binds quarks.

David Jonathan Gross was born in Washington, DC, in 1941, the eldest of four sons and the grandson of Jewish immigrants from Czechoslovakia-Hungary-Russia, and David’s first ‘job’, at the age of 11, was to proofread his father’s book "The Legislative Struggle: A Study in Social Combat". His father helped write the US Employment Act of 1946 and accompanied the first US diplomatic/aid packages to Israel in 1953. His mother was born in the Ukraine, moving to the US after WWI, and was a chemistry graduate. The Grosses remained in Israel and David became an avid reader and student, interested in physics and mathematics, soon exceeding the knowledge of his teachers. He gained a BSc at the Hebrew University and went on to take his physics doctorate from the University of California at Berkeley.

In 1966 he was nominated to the Harvard Society of Fellows and in 1969 he joined the Princeton faculty as an assistant professor, was promoted to Professor in 1971 and stayed for 27 years. His students there included his fellow laureate Frank Wilczek, Edward Witten and others. After the discovery of asymptotic freedom, Gross continued to work on QCD but in the early 1980s, he began to work on string theory and in 1984 discovered the heterotic string, which it was hoped might explain the Standard Model – unifying all the forces of nature, including quantum gravity. From 1996 to 2012 he served as director of the Kavli Institute for Theoretical Physics (KITP) at the University of California, Santa Barbara and is a permanent member of the institute, as well as Chancellor's Chair Professor of Theoretical Physics. Gross is very active in international science advocacy. He was instrumental in the establishment of institutes for theoretical physics in India, China and South America. In 2016, he began a four-year term in the Presidential Line of the Amercian Physical Society where he became Past President in 2020. 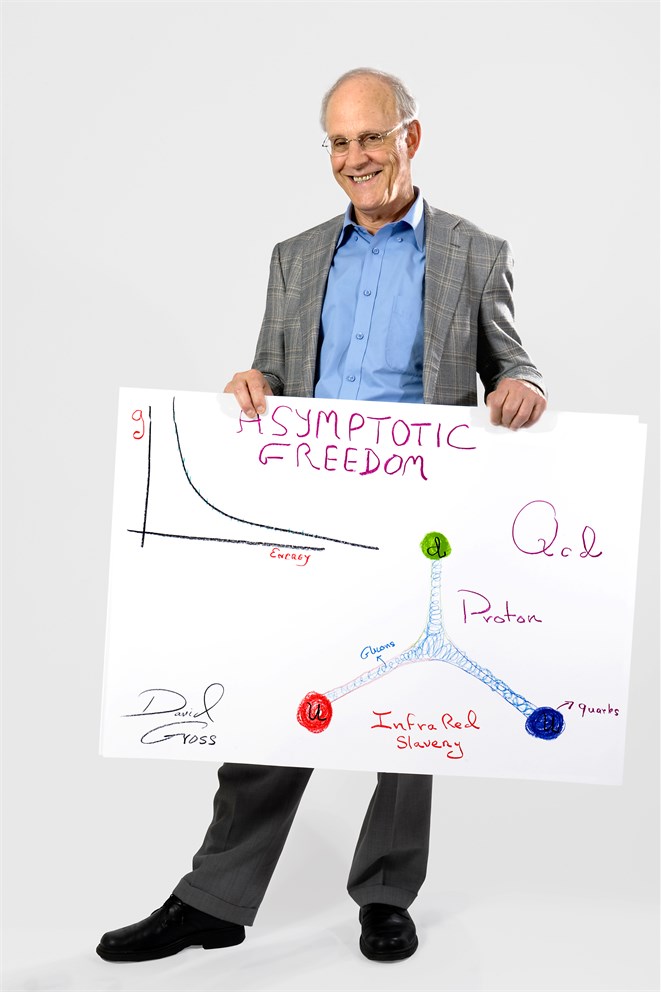 David Gross doesnʼt seem surprised at all when he is asked to make a
drawing of his Nobel discovery. Instead he does a great presentation,
big and colourful, that captures the essence of his discovery. Complete
with a title! Has he possibly done this before?
And in front of the camera he is a pro as well!

Keeping Quarks Inside
by Adam Smith

Under normal conditions, quarks, the fundamental building blocks of protons and neutrons, are never found out on their own. David Gross’s picture explains why. At the bottom right, the triangular structure illustrates a proton (let’s say the nucleus of a hydrogen atom), made up of three quarks. These quarks each possess a fractional charge (not the same as the electric charges that we associate with electrons or ions), and these charges are known as ‘colours’. Each quark is seen to have a different charge (colour), and it is these colours that give rise to the force field that holds them together; the so-called strong force.

Gross was awarded the Nobel prize in Physics for 2004 together with David Politzer and Frank Wilczek for their discovery concerning this strong force, and in his drawing Gross depicts both their discovery and the theory that was quickly developed to explain it. Intrigued by the observation that the force between quarks appeared to be very weak when they were close together inside the proton, but yet nobody had succeeded in pulling one out, they set about trying to explain this behaviour. They concluded that the quarks must be displaying a property they called ‘asymptotic freedom’, in which the force holding the quarks together gets greater the further apart they are. This property is shown graphically top left, where ‘g’, the strength of the force, reduces as the distance between the quarks reduces (expressed here by increasing energy). The term ‘asymptotic’ refers to the fact that if you move the quarks infinitely close together, the force reduces to zero.

The idea of asymptotic freedom is counterintuitive; most of the forces we encounter, such as electric or magnetic fields, work the other way around, getting weaker as distance increases. But this property of the strong force explains why quarks are confined to the interior of protons and neutrons and never found alone, since infinite amounts of energy would be required to pull them out. This is the phenomenon referred to by the words ‘Infrared slavery’ seen at the bottom of the sketch, the word ‘infrared’ here meaning low energy, hence large distances. Finally, the theory devised to explain the behaviour of the strong force is called Quantum Chromodynamics (Qcd), the ‘Chromo’ referring to the colour charges of the quarks.