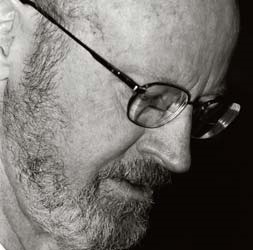 Robert Grubbs shared the 2005 chemistry prize with fellow American Richard Schrock and Yves Chauvin of France for ‘the development of the metathesis method in organic synthesis’. Metathesis (lit. ‘change-places’) is one of organic chemistry’s most important reactions. In metathesis reactions, bonds are broken and made between the carbon atoms that are the basis of all organic life, allowing atom groups to change places. In 1971 Yves Chauvin was able to explain in detail how metathesis reactions function and what types of metal compound act as catalysts in the reactions. Schrock was the first to produce, in 1990, an efficient metal-compound catalyst. Two years later Grubbs developed a better, more stable, catalyst that opened the field for organic and polymer chemists. Metathesis was
already used, mainly for pharmaceuticals and plastics, but the trio’s work has made the process simpler, more efficient and more environmentally friendly, allowing greater opportunities for producing new molecules artificially.

Grubbs was born at the family farm near Calvert City, Kentucky in 1942. He inherited practical skills from his father and an intellectual drive from his grandmother and his mother, a teacher. His interest in science was sparked by his teacher in junior high school and by the location of a major uranium refining facility in western Kentucky. From school, Grubbs progressed to the University of Florida, studying agricultural chemistry – with a summer job “analysing steer faeces”. He found more pleasant work in an organic laboratory, working for Merle Battiste, who encouraged him to join Columbia University in New York, where he obtained his PhD under Ronald Breslow in 1968.

Inspired by Australian chemist, Rolli Pettit, Grubbs geared his research toward transition metal organometallic chemistry, and he obtained an NIH fellowship to work with Jim Collman at Stanford. Collman had developed an effective understanding of catalytic processes, but olefin metathesis required completely new fundamental steps. In 1969, Grubbs joined Michigan State University (MSU), where he started work in olefin metathesis and along with Tom Katz of Columbia, demonstrated the basic steps of the Chauvin mechanism. He was still working on it and developing such as ring closing metathesis (RCM) and cross metathesis in organic synthesis and ring opening metathesis polymerization (ROMP) of cyclic olefins for polymer synthesis when he moved to Caltech in 1978. Existing catalysts required air and water free conditions for use. Grubbs’ team pursued, and finally perfected, ruthenium based catalysts that were more stable than tungsten and molybdenum versions and could be commercially produced.

He is currently Victor and Elizabeth Atkins Professor of Chemistry at Caltech. Grubbs is best known for his catalyst for olefi n metathesis and ringopening metathesis polymerisation (ROMP) with cyclic olefi ns such as norbornene. He also contributed to the development of so-called ‘living polymerization’. Grubbs met his wife, Helen O’Kane, at Columbia. They have three children. 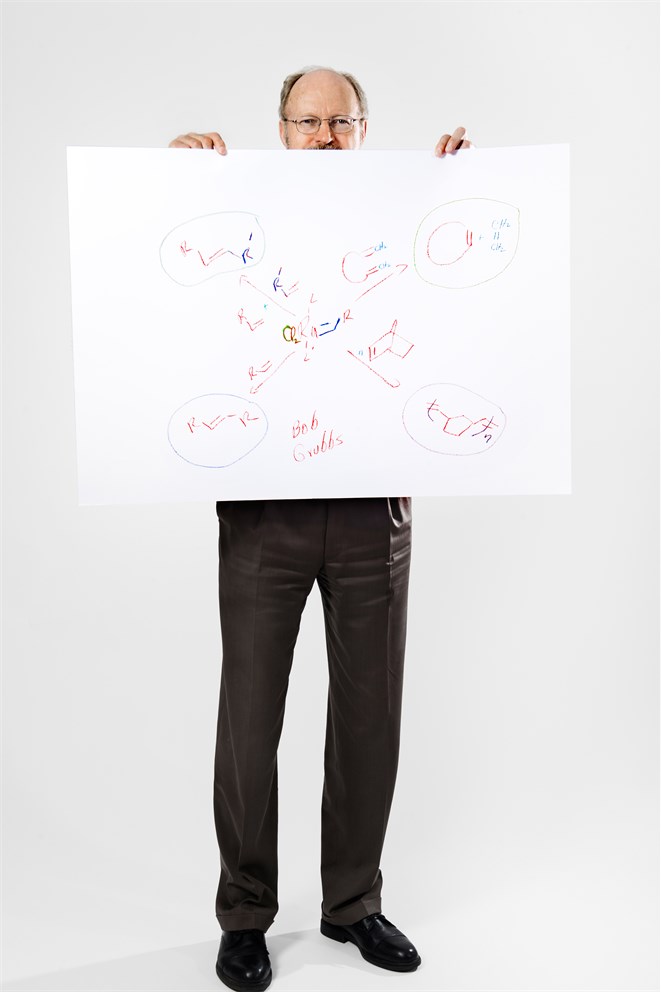 Chemistry is largely about making compounds.
Catalytic chemistry is about making them smartly.
A tall man enters the studio and starts sketching with precise,
rhythmic strokes. And the result is a precise, rhythmic drawing:
Robert Grubbʼs catalysts are really about cracking the rings
and making chemical elements dance.

In this diagram, Bob Grubbs has tried to capture some of the power and breadth of the metathesis reaction, to which he and his co-Laureates Yves Chauvin and Richard Schrock have devoted much of their lives. The reaction, which works particularly well on carbon-carbon double bonds (the parallel red lines seen throughout the sketch), provides a whole new way of making connections between atoms and breaking more complex molecules up into simpler pieces. “One of my colleagues described it once as like building a new saw that allows you to put things together in a slightly different way,” says Grubbs.

At the heart of Grubbs’ diagram lies the essential catalyst for the reaction. This one, based on a ruthenium atom double-bonded to carbon, was developed in Grubbs’ lab, but there are now many variants of metathesis reaction catalysts. The arrows leading off into the corners of the picture illustrate some of the ways this catalyst can open rings, make rings and shuffle bonds. Starting at the upper right, this reaction is making a ring, and while the metathesis reaction can be used to make rings of almost any size, it has found great application in the production of medium-sized rings. Going clockwise, the next arrow, bottom right, shows a polymerization reaction leading to the formation of polynorbornene, a compound being tested for use in the production of wind turbines, among other things. Next comes homodimerization, taking a simple olefin (a molecule containing double-bonded carbon) and making it bigger. And lastly, top left, is cross-metathesis, making a new carbon-carbon double bond from two simple olefins. Cross-metathesis is, for instance, now being used industrially worldwide to produce useful chemicals and fuels from seed oils.

Alongside the diversity of the couplings and uncouplings that the metathesis reaction can promote, the method has found favour because it is particularly clean, cheap and efficient. It doesn’t require a lot of reagents and since it proceeds in a catalytic fashion, tiny amounts of catalyst will promote the reaction of very large numbers of other organic molecules. Metathesis, which has become an essential part of the arsenal of tools available to the synthetic organic chemist, also doesn’t produce many by-products and so is often referred to as a ‘green’ reaction.