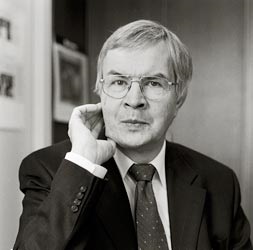 Theodor Wolfgang Hänsch shared one of the two 2005 physics prizes with John Hall of the USA for their independent development of laser-based precision spectroscopy. The other prize was awarded to Roy Glauber (USA) for his theory on the behaviour of photons. Light, like radio waves, is a form of electromagnetic radiation. Different colours come from light at different frequencies. Hall and Hänsch have made it possible to measure frequencies with an accuracy of fifteen digits, allowing lasers to be fine-tuned to produce extremely narrow-band radiation.

Hänsch was born in Heidelberg, Germany, in 1941. The family lived in a house that had belonged to chemist Robert Bunsen, and Theodor’s father brought home a Bunsen burner to demonstrate some simple chemistry, burning table salt and explaining the sodium caused a bright yellow flame. “It was obvious to me that I had to find out more about light and atoms”, Hänsch recalls. At 16, he built a Geiger counter and set his sights on becoming a nuclear physicist. Hänsch was educated at the Helmholtz Gymnasium and progressed to Heidelberg University, gaining his PhD in 1969. In 1970, he left Germany to join Arthur Schawlow, co-inventor of the laser, at Stanford. There Hänsch invented a widely tunable laser with a high spectral resolution (i.e. all the photons emitted had nearly the same energy, to within one part in a million).

Based on a laser he had seen at Bell labs, Hänsch and Schawlow invested in a similar device. Hänsch used a pocket telescope to spread the beam and observed a dramatic improvement in the laser line width, reducing the spectral width to 0.0004 nm. He devised a scheme for saturation spectroscopy – a technique later known as Hänsch-Bordé method, since Christian Bordé in Paris had pursued similar ideas. In 1973, Schawlow and Hänsch were named California Scientists of the Year. Hänsch remained at Stanford, rising to professor in 1975, before returning to Germany in 1986. In Germany, Hänsch joined the Ludwig Maximilians University of Munich (LMU) as a professor and set up a new laser spectroscopy lab at the Max Planck Institute in Garching, where he served as director. He now heads the Emeritus Group Laser Spectroscopy at the Max Planck Institute of Quantum Optics and is active as Carl Friedrich von Siemens Professor at the Ludwig Maximilians Universität (LMU) in Munich.

It was in Garching, at the end of the 1990s, that Hänsch developed the ‘frequency comb synthesiser’, which produces frequency measurements for light across the spectrum so precise – to one part in a hundred trillion – that it is possible to search for changes in the fundamental physical constants of the universe over time and, more prosaically, develop accurate clocks and improved global positioning system (GPS) technology. Hänsch’s team also created a Bose-Einstein condensate on a microfabricated chip in 1998, and created the first continuous wave atom laser in 1999. He has received several honours, including the Gottfried Wilhelm Leibniz Prize, the highest honour awarded in German research. 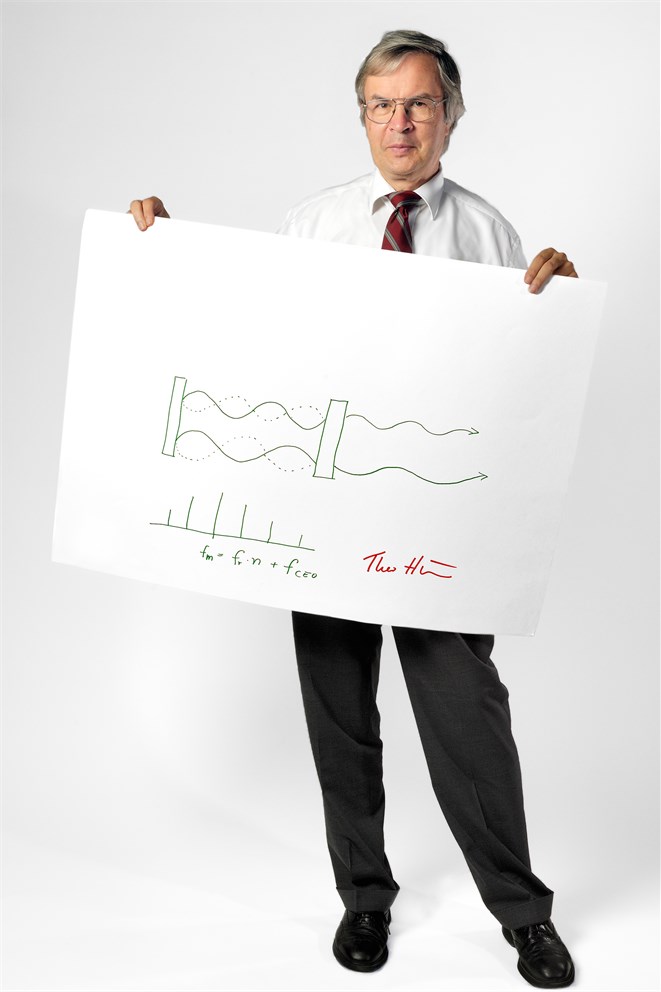 Hänsch has no time and is very hungry. He likes fish and there is fish waiting at
the restaurant. So, we have 15 minutes including the drawing!
Hänsch begins at once to draw, systematically, and I assume he has done this
before. Everything in green, with a red signature (Why do physicists like these
green markers so much?) This is a man with a great signature.
And he is a giant with a loud laugh.
His glasses reflect somewhat, I guess I will have to live with that.

This sketch depicts the most accurate measuring device that humankind has so far invented. Called the ‘optical frequency comb’, it is used as an ‘optical ruler’ to measure frequency in the same way we use solid rulers to measure distance. In fact the frequency comb even looks a bit like a ruler. The method, which was developed by Theodore Hänsch and John Hall, with whom he shared the Nobel Prize, is now being used in applications ranging from the more accurate recording of time to the search for earth-like planets outside the solar system.

‘Frequency’ is a concept few of us think about much, and means simply the number of cycles per second. We’re used, however, to thinking of the different frequencies of light as being responsible for the colours of the spectrum. A frequency comb is simply an optical spectrum which consists of equidistant lines, the frequencies of which are known with extremely high precision. If the comb frequencies are known, then the frequency comb can then be used to measure unknown frequencies.

The upper sketch shows a simple description of a laser caught at one instant in time. It consists of two mirrors (the rectangles) with oscillating light waves (or ‘modes’) between them. Two modes are shown, one with four half-waves fitting between the mirrors, and the other with three. These are standing waves, much like the standing waves created by plucking the string of a guitar. The waves have different wavelengths, different frequencies, and you can ‘mode lock’ a laser to contain a million separate modes, all different by the number of half wavelengths that fit between the mirrors. These modes interfere with each other and at the moments when they oscillate in phase and reinforce each other, the laser produces an intense pulse of light. In the time domain, the mode-locked laser is observed to produce a series of pulses. But if you look instead at the frequency domain, the laser produces a spectrum of evenly spaced spectral lines: the frequency comb, as seen in the lower sketch.

“In basic science,” says Hänsch, “when I can measure with higher accuracy I can look where no one has looked before, and then I have a chance to see something that nobody could see before. So if you want to increase the odds of discovering something new, then measuring more precisely is a good idea.”