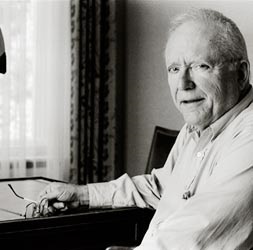 John Lewis Hall shared one of the two 2005 physics prizes with Theodor Hänsch of Germany for their independent development of laser-based precision spectroscopy. The other prize was awarded to Roy Glauber (USA) for his theory on the behaviour of photons. Light, like radio waves, is a form of electromagnetic radiation. Different colours come from light at different frequencies. Hall and Hänsch have made it possible to measure frequencies with an accuracy of fifteen digits, allowing lasers to be fine-tuned to produce extremely narrow-band radiation.

Hall was born in Denver, Colorado, in 1934, the son of an electrical engineer and a teacher. From school in Denver, he received a Westinghouse Scholarship to study physics at Carnegie Institute of Technology (now Carnegie Mellon University), earning a BSc in 1956, MSc in 1958 and PhD in 1961. For his thesis work he built an electron microwave spin resonance spectrometer to study the hyperfine spectrum of interstitial hydrogen atoms. He then became a National Research Council Fellow at the National Bureau of Standards (now known as NIST) in Washington, DC, after which he joined a new research group of NBS fellows at the University of Colorado in Boulder. He remained with NIST at Boulder until his retirement in 2004, lecturing at the university since 1967, and is now a NIST Senior Fellow, Emeritus and remains a Fellow at JILA (formerly known as the Joint Institute for Laboratory Astrophysics – a research institute managed jointly by CU Boulder and NIST).

Hall was a leading figure in the efforts to measure the speed of light. However, the accuracy was limited by the definition of the metre. The General Conference of Weights and Measures, which has ruled on the exact definitions since 1889, abandoned the material measuring rod in 1960. By use of measurements of spectra, an atom-based definition was introduced: a metre was defined as a certain number of wavelengths of a certain spectral line in the inert gas krypton. Some years later an atom-based definition of a second was introduced, which could be read off the cesium-based atomic clocks. In 1983, therefore, the speed of light was defined as exactly 299,792,458 m/s, and thus a metre was the distance travelled by light in 1/299,792,458 s. Hall was instrumental in this process, through the development of extremely frequencystable laser systems and advanced measurement techniques.

Hall has also published more than 230 articles, and holds ten US patents. He is a member of the National Academy of Sciences, a Fellow of the Optical Society of America and the American Physical Society. He is married to Marilyn ‘Lindy’ Robinson, and they have three children. 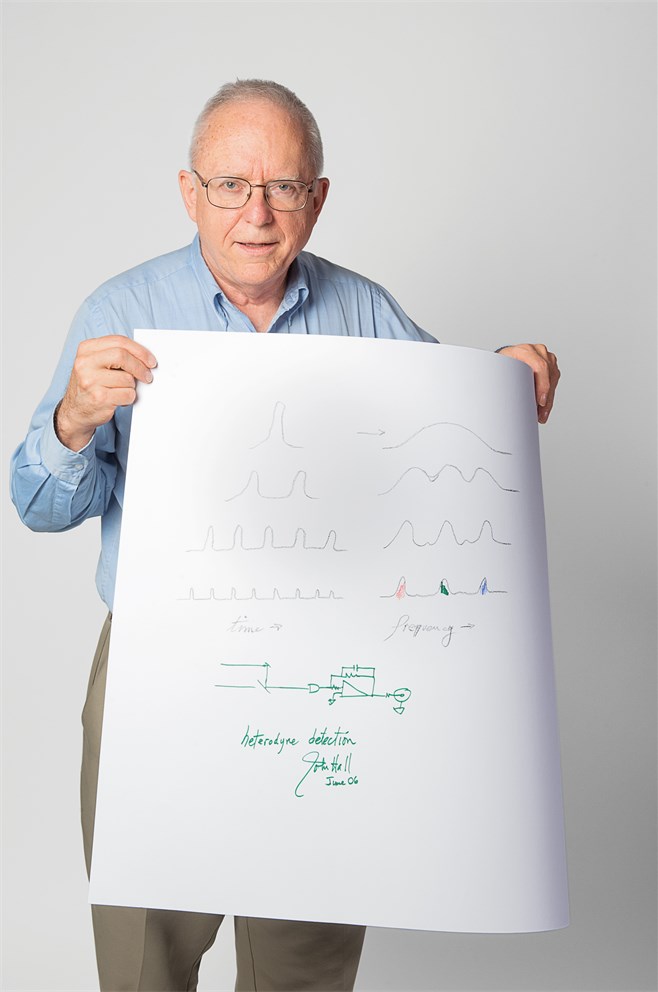 John Hall with his "Sketch of Science"

Hall gives me a sceptical look, obviously not convinced that coming into my studio was a good idea. When asked to draw, he only uses green – and only half of the paper! He actually wants to tear the blank bit off, because it is still perfectly good and usable for something else, as he says.... At home in his lab he claims to even tape together pieces of paper with scotch! For the picture, he hides the blank part of the drawing...