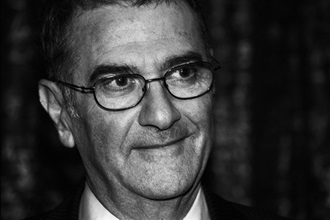 Most people are familiar with the notion of Schrödinger’s Cat – Austrian physicist and 1933 Nobel Laureate Erwin Schrödinger was trying to explain the nature of quantum superposition, in which a particle can be in several states at once. The cat in his ‘thought-experiment’ is completely isolated from outside influences in a box with a bottle of cyanide that will be released when a radioactive atom decays. The decay is governed by the laws of quantum mechanics, according to which the radioactive material is in a superposition state of both having decayed and not yet decayed. Therefore, the cat must also be in a superposition state of being both dead and alive. Quantum superposition is so sensitive to interaction with the environment that the slightest attempt to observe the cat would immediately ‘collapse’ the ‘cat-state’ to one of the two possible outcomes – dead or alive.
Serge Haroche and David Wineland, working independently but joint recipients of the 2012 Nobel Prize in Physics, found ways to sneak a peek inside the box although, instead of a cat, they trapped quantum particles and put them in cat-like superposition states.

In their Paris laboratory, Haroche and his research group set out to trap light itself. Microwave photons bounce between two mirrors, about three centimeters apart. The mirrors are cooled to a temperature just above absolute zero and are made of a superconducting material so reflective that a single photon can bounce back and forth inside the cavity for almost a tenth of a second before it is lost or absorbed. In this brief time the photon travels 40,000 kilometers, equivalent to about one trip around the Earth. During this time, Haroche uses specially prepared Rydberg atoms, which are roughly 1,000 times larger than typical atoms to both control and measure the microwave photon. These atoms are passed through the cavity in a controlled manner, during which the interaction between the photon and the atom creates a change in the phase of quantum state of the atom. This phase shift can be measured when the atom exits the cavity, and thus a single photon can be measured without destroying it.

Serge Haroche was born in Casablanca in September 1944. In 1956, at the end of the French protectorate treaty, he left Morocco for France with his family. He attended the Ecole Normale Supérieure (ENS) where, under the supervision of Nobel Laureate Claude Cohen-Tannoudji, he wrote a PhD dissertation on dressed atoms. He then spent a year as a visiting post-doc in Stanford University, California, working with another Nobel Laureate, Arthur Schawlow.

During the 1970s, Haroche developed new laser spectroscopy methods based on the study of quantum beats and superradiance. He then studied Rydberg atoms, named after Swedish physicist Johannes Rydberg. These giant atoms are particularly sensitive to microwaves, which makes them well adapted for studying the interactions between light and matter.

He is emeritus professor at College de France where he held from 2001 to 2015 the Chair of Quantum Physics. He carried out his prize-winning research in the laboratoire Kastler Brossel at ENS, working with a team including two former students who have become long term collaborators, Jean-Michel Raimond and Michel Brune. Serge Haroche lives in Paris with his wife Claudine. They have two children.